We had a successful launch last night of the ESTCube-1 satellite from Kourou, about which more tomorrow when I’ll be talking about electric sails and their uses both interplanetary and interstellar. But this morning, with the Starship Century Symposium rapidly approaching, I wanted to run this overview, which corrects and updates several things in the post I published a couple of weeks ago. Seats are still available for those of you in range. Thanks to Jim Benford for the following: 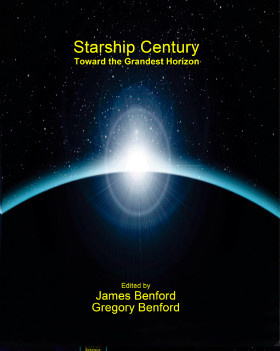 The Starship Century Symposium is the inaugural event at the new Arthur C. Clarke Center for Human Imagination at UC San Diego, Tuesday Wednesday, May 21–22. The program is located here. The symposium celebrates the publication of the Benfords’ anthology, Starship Century. Jon Lomberg, the artist who collaborated extensively with Carl Sagan, has read the book and has this comment:

Starship Century is the definitive document of this moment in humanity’s long climb to the stars. Here you can find the physics, the astronomy, the engineering, and the vision that provides the surest guideposts to our future and destiny.

In addition to the speakers, there are a number of panels. One, about the development of the Solar System, is ‘The Future of New Space’. Another is a panel on ‘Getting to the Target Stars,’ moderated by SETI celebrity Jill Tarter. The conclusion is a science fiction writers panel, ‘Envisioning the Starship Era,’ moderated by Gregory Benford and featuring Joe Haldeman, David Brin, Vernor Vinge and Jon Lomberg. At the conclusion of the Symposium there will be a book signing for other books of the authors present. There will also be a later book signing at Mysterious Galaxy bookstore a few miles from the University. It will feature Starship Century and the works of the other writers present.

The Symposium will be webcast and then archived. The webcast, which activates at the time of the event, is here.

The Benfords will donate the profits from sale of the book to interstellar research activities. They are currently working to establish a research committee that will award research contracts. The edition available at the symposium will be unique, a collectors item. The book will then go into general distribution in the summer. The Benfords recommend purchasing through a link that will soon appear on the Starship Century website.

This route is optimal because it maximizes the percentage profit, thus maximizing the money available for research. As we all know, research dollars have been greatly lacking in the interstellar area, which is one reason why the interstellar organizations such as Icarus Interstellar, Tau Zero and the Institute for Interstellar Studies are volunteer organizations. The Benfords are planning a second symposium to be held in London in the fall.