The Growth of Interstellar Organizations

The British Interplanetary Society was founded way back in 1933, and included such luminaries as Arthur C. Clarke and Val Cleaver among its early membership. The Institute for Interstellar Studies (I4IS), also based in London, was founded in 2012 and is not, to the best of my knowledge, yet incorporated. Between the two dates and mostly emerging in the first decade of the 21st Century are a number of organizations that in one way or another focus on what I call ‘interstellar studies,’ meaning science and engineering dedicated to interstellar flight.

The trick becomes to keep everything straight. When I started writing my Centauri Dreams book back in 2002, the BIS was a clear model for what a small group of dedicated workers could achieve. It had produced a Moon mission concept as early as the 1930s and went on to create the first fully realized design for an interstellar craft, Project Daedalus. The BIS used the ‘red issues’ of its journal to focus on interstellar work while JBIS was otherwise devoted to a wide span of subjects involving astronautics and rocketry.

What we didn’t have in 2002 was the influx of enthusiasm that new organizations with a specifically interstellar focus have brought. This is where the occasional confusion arises, as I can attest from reading email questions from readers. Consider the sheer number of conferences that are suddenly available. Early in the year we had the Tennessee Valley Interstellar Workshop. Fast approaching is Starship Century in San Diego. In August it’s time for the Starship Congress hosted by Icarus Interstellar, while the 100 Year Starship project looks at a conference to be held in September.

I’m also told there is to be a London conference, presumably under the auspices of the Institute for Interstellar Studies, some time in the fall, and the BIS continues to have smaller conclaves at its London headquarters. I’ll cover all of these in these pages, of course, but you should also be aware that we’ve set up a calendar feature on the Tau Zero Foundation’s site that will keep you posted on events you may not otherwise have known about. Right after Starship Century, for example, is the ISDC 2013 Global Collaboration in 21st Century Space event, from May 23-27 at the La Jolla Hyatt Regency in San Diego. The calendar is just up and we’re only now populating it, but the idea will be to track down the major events and make sure they’re visible. 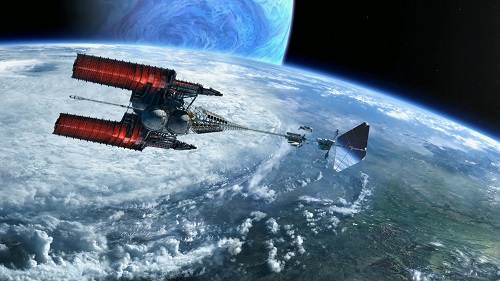 Image: The ISV Venture Star from James Cameron’s Avatar, one of Hollywood’s best realizations of futuristic starship design. The proliferating number of interstellar organizations may have as one effect more attention by filmmakers to creating plausible designs. Credit: 20th Century Fox.

I’ll likewise call your attention to our listing of the various interstellar organizations, published by order of incorporation, on the Tau Zero site. Regular Centauri Dreams readers will already know about Icarus Interstellar and I4IS, but you may want to scroll through the organizations to learn more about groups like Space GAMBIT, which was incorporated in 2012 and is supported by a $500 K DARPA grant. This one focuses on research that can be accomplished by what the group calls ‘hackerspace’ groups, clusters of enthusiasts working with shared tools in venues ranging from garages to clubs and college campuses.

And while you’ve heard me talk at times about my friend Tibor Pacher and his group Faces from Earth (founded in 2006), you may not be as aware of the Global Starship Alliance (GSA), whose goal is “…to launch a manned starship to the nearest potentially habitable exoplanet.” Beyond this is an agenda for improving life for our descendants: “Pursuing the challenge of interstellar travel will enhance the groundwork for a host of technologies that society needs today to ensure the sustainability of the Earth.”

And I’m almost certain you won’t know about the Interstellar Propulsion Society, which surfaced as a predecessor of the Tau Zero Foundation in the mid-1990s, dissolving with the advent of NASA’s Breakthrough Propulsion Physics project, only to re-emerge as Tau Zero when BPP funding was withdrawn and its head, Marc Millis, took early retirement to devote himself to interstellar studies. Then too we can’t forget old stalwarts like the Planetary Society, which does occasionally probe into interstellar realms, and certainly the scientists at the SETI Institute.

We’ve just gotten the list up and will add to it as we go, but I wanted you to be aware of it given the confusion I’m hearing from some readers about who is doing what at which conference. Over time, the hope here is that these things will settle down into a more sustainable schedule. But we can also enjoy the flurry of activity that accompanies the rise of new organizations, and hope that this enthusiasm burns bright as we attract a larger gathering to the fascinating study of starflight.