A Program for Star Flight

We become so bedazzled by the assumptions of our time that we can forget how things looked in different eras. 1973 wasn’t all that many years ago in the cosmic scheme of things, but the early ‘70s were a time of surprising optimism when it came to our future in space. As we saw yesterday, physicist Robert Forward laid out a plan for interstellar expansion to a subcommittee of the U.S. House of Representatives in 1975, even as a thoughtful Michael Michaud worked out his own concepts in a series of papers in the Journal of the British Interplanetary Society. But nudging ahead of both men by a few years was G. Harry Stine.

Already making a name for himself as a science fiction writer under the pseudonym Lee Correy, Stine was a futuristic thinker who fired readers’ imaginations with a cover article in the October, 1973 Analog, an issue whose artwork I reproduce here. Rick Sternbach’s cover caught my eye when I first saw this issue while toiling as a grad student that year, but it was the Stine article, “A Program for Star Flight,” that made me move the magazine to the top of my ‘must read’ list, even though I had little time for reading outside my class work. 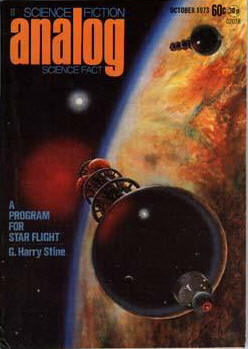 Stine wanted to examine starflight by starting with “what we know now or with things that are amenable to engineering development.” This is Bob Forward’s spirit being channeled by Harry Stine, a look for solutions within known physics that pushed engineering as hard as it could be pushed, assuming that future developments would allow the production of the huge amounts of energy demanded. Stine didn’t want to pick up science fiction tropes he considered over the top, like faster-than-light travel or cryo-preservation. He thought in terms of huge ships and trips that lasted for generations.

In most respects, we’re still in the Stine era, in the sense that while we’ve learned a great deal about the stars around us and have made huge advances in computer technology, our basic methods of reaching space — chemical rocketry — are still in place despite the intervening 40 years. Project Icarus exists partly to look at what changes have occurred in this period to make starflight a more practical proposition, but it’s a daunting fact that we’re still trying to light fusion in a sustainable and productive way and we certainly don’t have it yet for propulsion.

But it’s interesting to look at Stine in another way. For in this article he lays out a basic justification for going to the stars that emerged at a time when the Apollo program had triggered serious blowback from those who wanted all our resources to be applied to Earth’s problems first. So let’s look at Stine’s list and see how his own rationale for starflight stands up from our vantage point today. I’ll go through all eight of his points in the order presented.

These are general reasons, and I won’t attempt to assign priorities to them or even try to guess which one, if any, will be the final justification used. I refuse to do this because I have a built-in cultural bias. I am an American who speaks and thinks in the English language and who has an Anglo-Hellenic cultural heritage. Star flight may be accomplished by another culture for reasons that would seem absurd to Americans. In other words, don’t assume that star flight won’t be done because we have lost our nerve, drive, or ambition — because you are speaking strictly of our culture. When it comes time to go, those who man the starships may be from a renascent culture on the make with fire in their guts.

My own take on Stine’s list is that the earlier items are the main drivers we can identify with today. I’ve mentioned the quest for knowledge for its own sake, a seemingly essential component of human nature. But that needs coupling with species survival. Stine doesn’t go into the matter but I’ve advocated in these pages that building our space infrastructure as a means of planetary protection will inevitably lead to deep space technologies that will boost our expansion beyond the Solar System. If so, our exoplanet discoveries — and particularly finding biomarkers in exoplanet atmospheres, which we may do within a matter of decades — would constitute a compelling reason to put a payload around another star to continue the investigation up close.