The Angle on Pluto

The progress of New Horizons through the outer Solar System has me thinking back to Voyager’s great encounters. In 1986, when Voyager 2 whisked past Uranus, I was about to head off for a weekend of intensive work as a flight instructor — a client we had contracted with had a large number of pilots in need of recurrent training, and I knew I would be in the cockpit well into each night, as indeed I was. 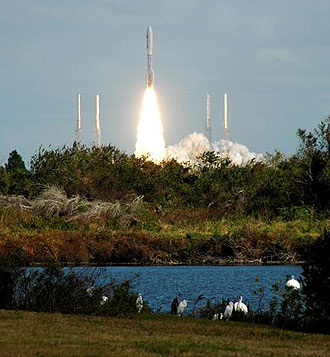 Those long days and the memory of Voyager at Uranus are, of course, tinged with the explosion of Challenger, which took place a scant four days after Voyager’s closest approach to the planet. We were all riveted by the coverage of the event but could only catch it in between training flights, but I remember trying to keep my mind off the fallen Shuttle as we dealt with constantly challenging weather over Maryland and West Virginia. And it was only later that I was able to really sit down and go over the images from Uranus, whose system of moons had always intrigued me — it has continued to do so, especially after my first glimpse of Miranda.

Triton had much the same effect on me later. Neptune was in the summer of 1989, twelve years after launch, and I remember taping the encounter on a couple of VCR tapes that I still have around here someplace. New Horizons, we can hope, will offer up equal wonders, for it seemed that everything that Voyager — and for that matter, Cassini — saw has re-written our knowledge and assumptions about outer system objects. We’re assuming, of course, that New Horizons can stay healthy through the encounter, which is the subject of principal investigator Alan Stern’s most recent update from the Applied Physics Laboratory at Johns Hopkins University.

Parameters of the Encounter

There are ways of maximizing science, something we definitely want to do, and ways of minimizing danger, and the New Horizons team has to balance between the two. After all, with the discovery of a fifth moon in the system in 2012, rising concern that passage through Pluto/Charon space might be hazardous was inevitable. Stern says a NASA-appointed technical review team and a separate group of senior executives at NASA headquarters has signed off on the findings of the New Horizon team. He adds:

The Pluto system appears to be far safer than early fears and initial calculations indicated when the new moons began popping up. In fact, the best current models predict a 0.3% (1-in-300) chance of a mission-ending impact near closest approach on the nominal trajectory. Much of the reason for this lowered risk assessment is that more sophisticated dust-impact models revealed a decrease (by about a factor of 100) in lethal impact probability for trajectories that fly into the region where New Horizons is aimed now – a region where the gravitational effects of Pluto’s largest moon Charon clear debris. Another important factor is that when we tested spacecraft components against high-velocity impacts using gun ranges in New Mexico and Ohio, we found the spacecraft shielding is considerably “harder”– that is, more resistant to impacts – than preflight estimates indicated.

How will New Horizons maximize its chances? For one thing, the spacecraft’s approach trajectory is steeply inclined to the plane of Pluto’s satellites and any debris that may accompany them. The highest risk would be during closest approach. And that closest approach is in the region where Charon effectively cleanses the area of debris. The encounter plan, then, seems sound despite the recent satellite discoveries. Add to that the fact that New Horizons will itself search for hazards during the final weeks of its approach in the summer of 2015. 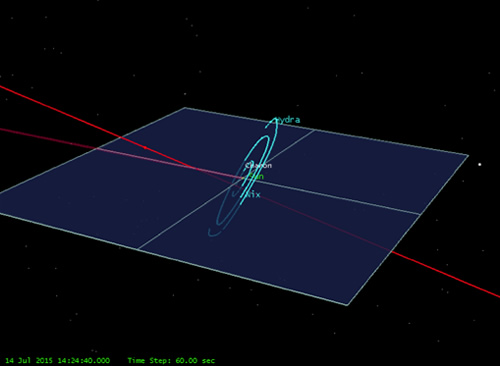 …we’ve also added “fail safe” data downlinks just two days and one day before the encounter to send home the best images and spectra stored on the spacecraft’s recorders, just in case our current estimates are wrong and we do lose New Horizons at closest approach.

Moreover, New Horizons has two alternate encounter sequences that can be uploaded to the spacecraft in the final weeks if needed. Stern’s post gives an explanation of these SHBOT’s (Safe Haven by Other Trajectory), in which the spacecraft can be repointed to protect its dish antenna, or the spacecraft itself directed toward a closer encounter with Pluto just inside 3000 kilometers from the surface (the planned encounter is at 12,500 kilometers). Going closer in allows more ‘drag clearing’ of debris particles, caused by Pluto’s tenuous upper atmosphere.

Let’s assume that prudent planning like this will give us a survivable encounter in 2015. New Horizons’ first image of Pluto/Charon is scheduled to be made this July, which happens to be the 35th anniversary of the discovery of Charon. The craft recently emerged from hibernation for summer encounter rehearsals and systems checks, and green onboard beacons continue to tell us that all is well. Ahead of us we have not just Pluto but Charon, a moon the size of Texas (Nix and Hydra are about the size of Rhode Island, according to the New Horizons team, while P4 and P5 are just the size of counties). Interestingly enough, Nix and Hydra are also about the size of the Kuiper Belt objects the team is hoping to flyby years after the Pluto/Charon encounter.