Oceans Under the Ice Worlds?

One of the things we’re going to be looking for at Pluto is evidence of a sub-surface ocean. About eighteen months ago I wrote about the work of Guillaume Robuchon and Francis Nimmo (University of California at Santa Cruz). With Pluto’s outer surface thought to be a thin shell of nitrogen ice covering a shell of water ice, these researchers have been asking what surface features might flag an ocean deep inside. An equatorial bulge left over from the days when Pluto was spinning more rapidly – or the lack of one – could be the evidence they’re looking for.

The thinking is this: Such a bulge could be as much as 10 kilometers high and New Horizons should be able to spot it. The presence of the bulge would indicate no ocean beneath, for the movement of liquid water would over time have reduced or eliminated the protrusion. But if New Horizons finds instead evidence of tensional stresses, indicating the outer shell was stretched because of temperature changes over time, then the possibility of an ocean is enhanced. If it’s there, Pluto’s ocean would most likely be maintained by isotopes undergoing radioactive decay. Robuchon and Nimmo think a planet-wide ocean would be about 165 kilometers deep under a crust of the same thickness. For more on their work, see The Case for Pluto’s Ocean.

Meanwhile, we’re also getting interesting news about Saturn’s moon Dione. Here we’re working with data from the Cassini orbiter, whose magnetometer has found hints of a faint particle stream coming from the moon, with evidence in other imagery of features not unlike those associated with the geyser activity on Enceladus. The findings are examined in a paper published in March in the journal Icarus that focuses on Janiculum Dorsa, an 800 kilometer long, 1-2 kilometer tall mountain under which the crust of Dione seems to be flexing. 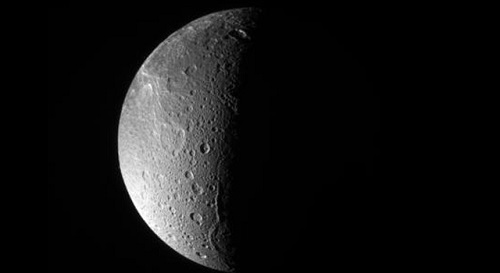 Image: The Cassini spacecraft looks down, almost directly at the north pole of Dione. The feature just left of the terminator at bottom is Janiculum Dorsa, a long, roughly north-south trending ridge. Lit terrain seen here is on the anti-Saturn and trailing sides of Dione (1,126 kilometers, or 700 miles across).The image was taken with the Cassini spacecraft narrow-angle camera on March 22, 2008 using a spectral filter sensitive to wavelengths of ultraviolet light centered at 338 nanometers. The view was acquired at a distance of approximately 650,000 kilometers (404,000 miles) from Dione and at a Sun-Dione-spacecraft, or phase, angle of 99 degrees. Image scale is 4 kilometers (2 miles) per pixel. Credit: NASA/JPL/Space Science Institute.

Here again we’re looking for evidence of activity that may have ended long ago, just as we keep our eyes open for that bulge on Pluto. But Noah Hammond (Brown University), lead author of the paper on this work, notes that what we see on Dione is intriguing: “The bending of the crust under Janiculum Dorsa suggests the icy crust was warm, and the best way to get that heat is if Dione had a subsurface ocean when the ridge formed.”

This JPL news release goes into the possibilities in a bit more detail, noting that tidal effects from Dione’s orbit and an icy crust that can move independent from the moon’s core could create the heat we’re witnessing here. But were the tidal forces on Enceladus so much stronger that they produced the geysers still active there? Or are the Enceladus geysers actually the result of more radioactive heating from heavy elements? Whatever the case, a possible ocean under Dione reminds us that other worlds of high interest — Ceres as well as Pluto and Charon — may show evidence for liquid water, which may in fact exist inside objects deep into the Kuiper Belt.