The all too early death of Iain Banks conjures up so many images from his books that I can’t begin to list them all here. Grant his sly word-play, his wit, his deft management of character and you’re still left with a sense of gratitude for the sheer poetry of his landscapes. In Look to Windward, a character named Kabe walks the streets of blacked out city, down along a dark canal whose quayside is softened by snow. Then he looks up and the universe rotates:

The snow was easing now. Spinwards, over the city center and the still more distant mountains, the clouds were parting, revealing a few of the brighter stars as the weather system cleared. A thin, dimly glowing line directly above — coming and going as the clouds moved slowly overhead — was far-side light. No aircraft or ships that he could see. Even the birds of the air seemed to have stayed in their roosts.

Spinwards… We’re on one of Banks’ ‘orbitals,’ space habitats formed as enormous rings millions of kilometers in diameter, its inhabitants living in an environment shaped by technology but fine-tuned to produce benign climates and often jaw-dropping visual juxtapositions. In the post-scarcity world of Banks’ Culture, Orbitals vie with Ships containing sentient minds, some utterly enormous, as are the General Systems Vehicles that can reach 200 kilometers in length. Here, too, we are dealing with artifacts that are entire worlds amidst a society in which the limits of material needs have been transcended and creative use of time is the imperative. 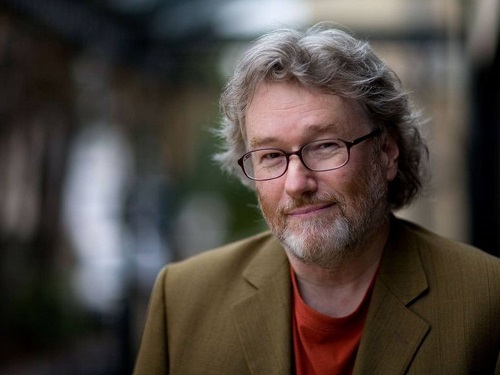 Anyone familiar with Banks knows he loved giving his ships absurd names, and thus we move among vehicles like ‘So Much for Subtlety’ (The Player of Games), ‘Very Little Gravitas Indeed’ (Use of Weapons) and ‘Just the Washing Instruction Chip in Life’s Rich Tapestry’ (The Hydrogen Sonata). Each of these ships, possessing an artificial intelligence of its own, becomes a character, and often a significant one, in the action.

If Banks had his playful side, he was often demanding, his wit leavening a style that could be tense and baroque. Here’s a passage from The Hydrogen Sonata that puts readers to work:

At sunset above the plains of Kwaalon, on a dark, high terrace balanced on a glittering black swirl of architecture forming a relatively microscopic part of the equatorial Girdlecity of Xown, Vyr Cossont — Lieutenant Commander (reserve) Vyr Cossont, to give her her full title — sat performing part of T. C. Vilabier’s 26th String-Specific Sonata For An Instrument Yet To Be Invented, catalogue number MW 1211, on one of the few surviving examples of the instrument developed specifically to play the piece, the notoriously difficult, temperamental and tonally challenged Antagonistic Undecagonstring — or elevenstring, as it was commonly known.

In this, a novel as dense with ideas as any Banks wrote, getting to know Vyr Cossont is only a small part of the challenge as the author describes space-faring species brought together in common interest over what could be described as the philosophical ‘suicide’ of an important fellow civilization. No more details — read the book and immerse yourself in a far future that’s as different from most such visualizations as it is possible to be. Remember, this is a universe without material want, but we certainly find out early that it is not one without conflict.

I have Centauri Dreams readers to thank for introducing me to Banks years ago, and I’ve worked my way through most of his science fiction, though not yet his well regarded mainstream work, novels like The Wasp Factory or Canal Dreams. If the dazzling inventions of an Arthur C. Clarke or Isaac Asimov were fuel for his imagination, I can also see why he listed Brian Aldiss and M. John Harrison as literary influences. The latter, in particular his Viriconium stories and novels, surely awakened Banks’ instincts. He found there an enigmatic, lush, highly textured prose that turned the remotest futurity plausible.

Thinking about Banks, as I did much of the weekend, I realized that the science fictional enterprise transcends the limits of what we’ve come to call ‘futurism.’ Self-styled futurists tend to get the facts wrong because they rely on something akin to prophecy. How could they do anything else? We cannot know what knowledge waits to be uncovered, and that makes projections of the future all too often pessimistic, based as they are on an extrapolation of current trends without any off-setting new information. Read David Deutsch for more on this. His The Beginning of Infinity is suffused with an innate optimism that draws on the fact that problems are solved through new knowledge in a process without foreseeable end.

Within the limitations of our own place in time, we cannot know what that new knowledge will be. Iain Banks, in the tradition of our best science fiction writers, takes us into futures that have already found it. His outcomes are rich because they challenge our understanding of ourselves. His is a future that is and is not familiar, one compounded of our aspirations and our fears. I’ll close with this fine passage from The Player of Games, a personal favorite. Again we’re on an orbital, at the close of a novel that has taken us all the way to the Magellanics:

He stood on the snow-covered balcony, gazing at the dark trees descending in uneven rows to the glittering black fjord. The mountains on the far side shone faintly, and above them in the crisp night dim areas of light moved on the darkness, occluding star-fields and the farside Plates. The clouds drifted slowly, and down at Ikroh there was no wind.

Gurgeh looked up and saw, among the clouds, the Clouds, their ancient light hardly waving in the cold, calm air. He watched his breath go out before him, like a damp smoke between him and those distant stars, and shoved his chilled hands into the jacket pockets for warmth. One touched something softer than the snow, and he brought it out; a little dust.

He looked up from it at the stars again, and the view was warped and distorted by something in his eyes, which at first he thought was rain.