A Sunny Day on a ‘Super-Earth’?

When a distant planet moves in front of its star as seen from Earth, the slight drop in starlight is often enough to allow sensitive instruments to make a detection. We call the degree to which the star’s light is diminished the ‘transit depth,’ and even with transiting gas giants, the figure is usually on the order of one percent. What we’re getting at is the ratio of the area of the planet to the area of the star behind it. The transit depth of the ‘hot Jupiter’ HD 189733b is unusually large at three percent. Obviously both a planet’s size and the the size of the star come into play.

In the case of the super-Earth GJ3470b, the primary star is relatively nearby and is also an M-dwarf, allowing greater transit depth and propelling a series of investigations from the ground. GJ3470b orbits its star at 0.036 AU, completing its orbit in a mere 3.3 days. The new work, led by Akihiko Fukui and Norio Narita (NAOJ), along with Kenji Kuroda (University of Tokyo), looks at the atmosphere of a planet with some fourteen times the mass of the Earth.

The team calculates the radius of GJ3470b at 4.3 times larger than that of the Earth, a figure about 10 percent smaller than previously reported. Its calculations also indicate that the planet possesses a hydrogen-rich envelope of considerable mass. Says Fukui:

Using the Near-Infrared Imager/Spectrograph (ISLE) mounted on the Multicolor Imaging Telescopes for Survey and Monstrous Explosions (MITSuME) instrument in Okayama, the team looked at the lightcurve of the transit in four colors from visible to near-infrared. This news release from the National Astronomical Observatory of Japan provides the image below, showing estimates of planetary radius by each of the colors observed. The radius derived from near infrared turns out to be 6 percent less than that derived from visible light. 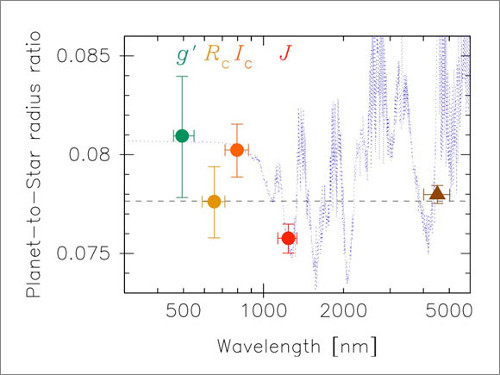 A plausible explanation for the differences is that the planetary atmospheric opacity varies with wavelength due to absorption and/or scattering by atmospheric molecules. Although the significance of the observed Rp / Rs [the planet-to-star radius ratio] variations is low, if confirmed, this fact would suggest that GJ3470b does not have a thick cloud layer in the atmosphere. This property would offer a wealth of opportunity for future transmission-spectroscopic observations of this planet to search for certain molecular features, such as H2O, CH4, and CO, without being prevented by clouds.

In other words, the lack of a substantial cloud cover should make it easier to find traces of water or methane in the atmosphere that could give us clues as to how the planet formed — thick clouds would have masked the differences in radii by color that the researchers detected. The team hopes to conduct further observations of the planet using the 8.2-meter optical-infrared Subaru telescope on Mauna Kea in Hawaii, looking for further ways to characterize the world’s atmosphere and get a clue as to whether it formed in its present position or further out in the system, later migrating inward.

The paper is Fukui et al., “Optical-to-Near-Infrared Simultaneous Observations for the Hot Uranus GJ3470b: A Hint of a Cloud-Free Atmosphere,” in The Astrophysical Journal, Vol. 770 (2013), p. 95 ff. (abstract).