We’re fortunate to have had Centauri Dreams regular Adam Crowl not just as an attendee but a speaker at the recent Starship Century symposium in San Diego. Here Adam, in the first of a two-part report, gives us a look at the speakers and their ideas. With regards to comments, please note: In the last week we’ve had a lengthy discussion of inclusivity in the space community that has absorbed two comment threads. Anyone who wants to continue that discussion can do so in our Facebook group. On this site we need to get back on topic, in this case, the ideas on interstellar flight presented at this conference and where they take us. 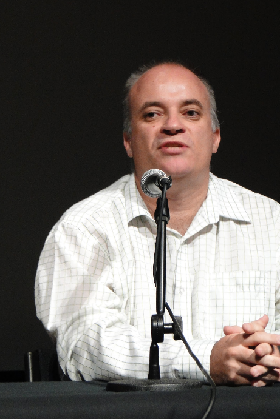 The Starship is still about 100 years away, but we will begin building it this century. This was the message that Gregory Benford and his mirror-twin, James Benford, were proclaiming together in San Diego, with the help of notables of both science and science fiction. And me. Just how I got involved is another story. Suffice it to say that I know a lot about starships, at least about every variety that has ever been seriously proposed.

The choice of venue and the timing were serendipitous – the Arthur C Clarke Foundation and the University of California in San Diego (UCSD) had been working together on the Arthur C Clarke Center for Human Imagination, and the UCSD is the alma mater of a surprising number of modern day Science-Fiction writers. Over the month of May a variety of events were scheduled, notably a conversation between Jonathan Lethem and Kim Stanley Robinson on May 14, but the biggest was the Starship Century Symposium. Not coincidentally there is also an associated book, though when I began working on my chapter contribution over a year ago I had no inkling of the event coming up. The Symposium provided a good kickoff for the book, which went on sale the first Symposium day.

The details came together quickly and the Symposium proved to be a credit to the organisers. The event proper was on May 21 & 22, but a UCSD function the night before set the scene, with the Chancellor and Sheldon Brown explaining what the Arthur C Clarke Center was and how it came about. UCSD is the alma mater for a surprising number of contemporary SF writers – not just the Benfords, but also David Brin, Kim Stanley Robinson, Neal Stephenson and many others – so the idea of Arthur C Clarke’s legacy finding a home there seems fitting.

I had arrived in San Diego that afternoon (May 20), after crossing the Pacific with a tail-wind for 12 hours, and had shared a shuttle bus to the La Jolla Shores Hotel, where the invited speakers were staying, with John Cramer. I had met John briefly at the Orlando 100 Year Starship (100YSS) conference, but had corresponded with him on-and-off for some time. He gave me a quick update on his retrocausality experiments (see his Alternate View column for details) and then we arrived. I grew up on Queensland’s Sunshine Coast so seeing the Pacific, but looking West, took a moment of reorientation.

Once checked in I needed to stretch my legs so I walked up the nearest street to the local Cafes and shops, only to run into fellow contributor to the book, Ian Crawford – another alien in this strange land of California. We discussed exoplanets and the fate of ocean planets, whether they would dry out or remain drowned, over the aeons. Returning to the hotel to get dressed I ran into Greg Benford – who briefly I confused with his brother Jim, as he was wearing a tie – and had an inkling I might be slightly over-dressed.

As with 100YSS, much of the discussion and interaction happened “off screen”. I spoke to so many people, several of whom told me amazing things, but I then promptly forgot what was on their name-badges. Familiar faces I quickly caught up with, especially Al Jackson, whom Centauri Dreams regulars would know well from Paul’s discussion of Al’s immense contribution to space-flight. Al astounded me by saying he only managed to see one live launch from Cape Canaveral – STS 135 – even though he had worked with many of the Apollo crews in the 1960s. A new face for me was SF writer Allen Steele, whose work I knew of, but hadn’t managed to yet read. A mutual friend, Winchell Chung, has written up much of the technical details of Allen’s novels on his Atomic Rockets website, and has also advised Allen on his more recent works. Other new faces, for me, were the polymath Eric Hughes, who wrote for Wired in the hey-days of Cyber-Punk in the early 1990s; Mark Canter, who is a former editor of Men’s Health magazine and these days writes SF novels with a more anthropological basis, and John Chalmers, an astrobiologist who has worked with Stanley Miller on the chemical origins of life. The audience of Starship Century was of stellar quality, how much more so the speakers. 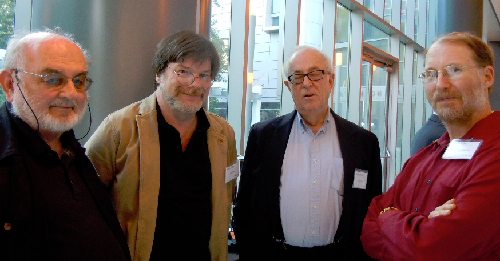 Day One, May 22, began with breakfast watching the breakers and discussing interstellar matters with James Benford. Instead of the UCSD Shuttle ride, I had a lift with Jim and Allen Steele as another passenger. Arriving, the puzzle was where to sit. With so many luminaries in attendance, one doesn’t just sit next to Freeman Dyson without introduction. Jim, Greg and Sheldon Brown [video] opened the day officially, and I sat back to listen to Peter Schwartz [video], renowned futurist and long term strategist for some very large companies, discuss the scenarios of the future that might get humanity to the stars. 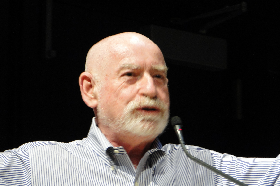 Peter covered three basic scenarios, though many more can be generated. The full details can be found in the Starship Century anthology, but in essence Schwartz saw three ideologies that could launch us to the stars. Firstly, “God’s Galaxy”, which implies a future Earth dominated by religion, sending forth missionaries to the unconverted of the Galaxy. Secondly, “The Dying Earth”, in which we’re seeking a second home, basically the back-story of “Firefly” and countless other SF treatments. Thirdly, “Interstellar Trillionaires”, in which the ultra-rich of a fully developed interplanetary economy launch forth for adventure or curiosity’s sake. Of course, what applies to us might also apply to other civilizations, with the logical implications for Fermi’s Paradox. Peter’s response to that was to suggest that “they” might be too sparsely spread in space-and-time for it to yet be an issue.

Next up was Freeman Dyson [video], who has a deserved reputation as a big thinker, as well as at least one near-miss with a Nobel Prize. In interstellar matters, his seminal popular piece “Interstellar Transport” (1968) described one of the few interstellar propulsion systems we could almost build now – nuclear fusion pulse propulsion. What I hadn’t realised was that the testing ground for “Project Orion”, the USAF/NASA nuclear pulse rocket, was in San Diego – of course, the test models only used high-explosives, but the video available of those tests is quite inspiring.

Since the heady days of the 1960s, Freeman has argued more for biotechnology playing a role in our interstellar plans. His lecture covered several ideas he has produced over the last 50 years, namely plant-derived habitats that we might grow on the cold bodies of the outer solar system, and the most efficient means of getting between the stars – send information. Eventually, he suggests, we might launch “biosphere seeds” to other star systems and grow new habitats for Earth-derived life as well as ourselves. Naturally this had ethical reactions from the audience as well as the rattling of chains by the Ghost of Fermi – if we can do it Out There, why hasn’t Someone done it here? After the lecture, during a break, I suggested to Ian Crawford that we might not know our biosphere’s genome well enough to tell if such a scenario hasn’t happened here. 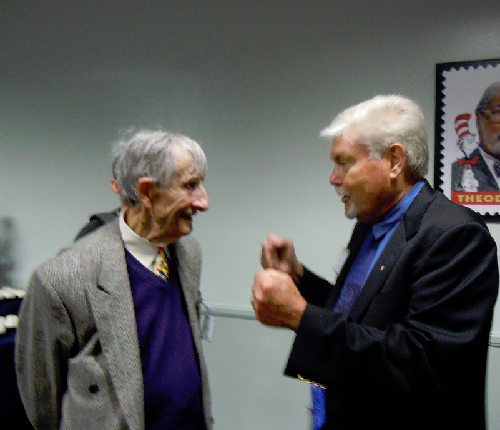 If Freeman Dyson created controversy, the next speaker, Robert Zubrin [video], practically invited it by daring to suggest that greenhouse warming might be preferable to billions of people living in poverty. Zubrin’s talk covered the economic Big Picture of what was needed to create an interstellar capable civilization, but also provided a chance for Robert to vent spleen about more radical environmental ideologues. Naturally he has a book which covers that particular argument, so I will refer the reader to that for more details. On interstellar matters, he made a powerful case that 100 to 200 years of continued development would see humanity ready to set forth to the stars in the first generation of fusion-propelled starships.

My one quibble was the “Energy at Retail Prices” fallacy being used to estimate the economic scale of interstellar flight – a 1,000 tonne spaceship moving at 0.1c and using energy at 10% efficiency would cost $125 trillion in energy bought at the retail rate of $0.1/kW-hr. The problem is that one doesn’t buy energy for a starship and just charge up the batteries. Instead a starship is more like an energy generator – using either solar energy or fusion fuels – and this requires a wholly different economic measurement. The estimates can vary significantly as a result. 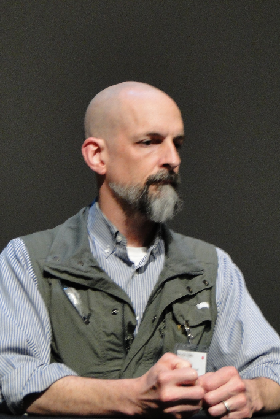 Neal Stephenson’s talk [video] was something else again. Not what I expected from an SF writer at all. Instead of Big Picture discussions, he described a vast 20 kilometer tower that he, and his Arizona State University team, have designed. His talk was thus a detailed look at an advanced theoretical engineering design study in progress. The challenge of such an immense structure, possibly hundreds of millions of tonnes of steel, working in such a changeable environment as the Earth’s atmosphere is fascinating, as is the associated novella in the anthology. But how does it relate to interstellar flight? Naturally the first thing I thought of was as an anchor for a space elevator. Greg Benford suggests another use in the anthology, in his story following as a coda to the Stephenson story. In the current design there is a big empty volume – for future use. A space to fill, for the next generation’s imagination. A reminder, like the Pyramids became, that what one achieves in the present will look different to the people who come after you.