Exoplanet Targets in Nearby Space

I’m a coffee fanatic. Not only do I drink a lot of the stuff, but I roast my own beans and love fiddling with roasting times and fan speeds, trying to hit exactly the right note. And with a just-brewed carafe of Burundi by my side this morning, it’s natural enough that I would be drawn to an exoplanet tool called ESPRESSO. Echelle SPectrograph or Rocky Exoplanet and Stable Spectroscopic Observations is the next generation spectrograph for the European Southern Observatory’s Very Large Telescope, which has already played such a huge role in finding distant worlds.

Using the HARPS spectrograph, the VLT already holds the record for most exoplanet discoveries from equipment on the ground. Upgraded with ESPRESSO, the VLT should be primed for even more fine-tuned radial velocity measurements. HARPS was designed to get us down to about the 1 m/s level, although its effective precision is considerably tighter. But we’re still not in range of Earth-like planets in the habitable zone. The Earth creates a radial velocity variation of 9 cm/s on the Sun, about three times smaller than HARPS can work with. ESPRESSO makes up the difference, taking us down to a few cm/s if all goes well, making detection of habitable planets in Earth-like orbits feasible from the ground.

Installation at the VLT is currently scheduled for 2016. As we ponder near-term developments like this, it’s intriguing how much is happening to push our knowledge of smaller exoplanets forward right here on Earth. The Next-Generation Transit Survey (NGTS), like ESPRESSO, follows a highly successful predecessor, in this case the Super-WASP project that went after exoplanets on the cheap. That’s ‘cheap’ as in camera lenses bought on eBay that have found 65 exoplanets.

Although Super-WASP (Wide Angle Search for Planets) demonstrated how successful searches could be managed from the ground, the Kepler ‘long stare’ into the Lyra/Cygnus star field examined planets whose transits are in many cases at the limit (or beyond it) of ground-based follow-up observations. NGTS goes after ‘hot Neptunes’ and ‘super-Earths’ from its site at Cerro Paranal at the European Southern Observatory in Chile, looking for transits around bright, nearby stars. These are transits that would allow follow-up observations by radial velocity methods, revealing not only the radius but also the mass and density of these worlds. 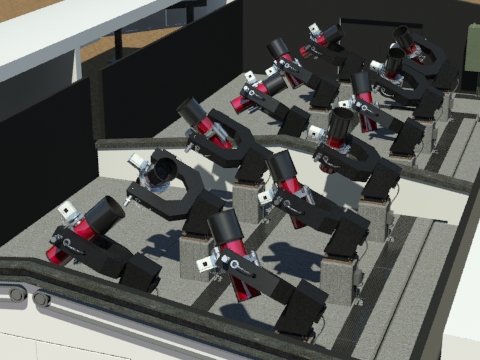 Image: Artist’s impression of the completed NGTS, a robotic facility to be sited at ESO-Paranal. Credit: Next-Generation Transit Survey.

Quoted in this feature in Astrobiology Magazine, Warwick University’s Peter Wheatley, co-principal investigator for NGTS, says the idea is to gather “… the first statistical sample of measured densities for small planets.” He adds: “We believe this sample will allow quantitative tests of planet formation, migration and evolutionary models, and will drive the development of future models.” But with space-based equipment like Hubble and the James Webb Space Telescope in the mix, we can also look toward identifying useful targets, smaller planets bright enough for their atmospheres to be studied through ‘transmission spectroscopy,’ where starlight that is absorbed as it passes through the atmosphere is analyzed to flag its components.

From the NGTS site:

The observation of the planet during its transit at many different wavelengths allows us to obtain its transmission spectrum (stellar light passing through the planet atmosphere). The transmission spectrum is measured by identifying the small differences in transit depth as a function of wavelength. This technique usually requires extremely high signal to noise data and has been successfully applied only on a few planets orbiting bright stars, like for example HD189733. However it is a powerful technique measuring the distinct signature of chemical components in the atmosphere of a planet. This technique can be used to search for water on some planets, and even eventually for biomarkers on rocky planets. It has been successfully carried out on GJ1214b, a Neptune type planet, using FORS [FOcal Reducer and low dispersion Spectrograph] observations. However, the discovery of additional bright targets is essential for this technique to be more widely applied to planets in the Neptune size range.

And here’s the GJ1214b work, showing how the transit light curve can be used to tease out atmospheric information:

The Next-Generation Transit Survey is to be a robotic installation using an array of small telescopes operating in the 600-900 nm band, maximizing their sensitivity to K and early M-class host stars. Finding the brightest exoplanets in the ‘hot Neptune’ and ‘super-Earth’ categories will give us fodder for study by the VLT as well as Hubble and JWST, with all key technologies already demonstrated through a successful prototype. Also aided by NGST data will be the European Space Agency’s CHEOPS (CHaracterising ExOPlanets Satellite), slated for 2017 launch, which will target already identified planets to improve their transit measurements.

Ground- and space-based instruments are intertwined as we push exoplanet studies toward smaller and smaller planets. We already confirm many transits through radial velocity methods with tools like HARPS, but to take the study of exoplanet atmospheres to the next level will require even larger observatories like the planned European Extremely Large Telescope, or the proposed Colossus. In an era of big equipment, it’s heartening to think that relatively inexpensive tools like the NGTS can play so vital a role in finding the targets for these behemoths.