On Memory and Destinations

There was a time when people collected old photographs in drawers and photo albums, a time before the digital age when you wasted three or four shots getting just the one you wanted, and the perishability of film was born home every time you saw colors fading on an old image. Yesterday I browsed through black and white snapshots of family members long gone, pictures taken in the 1920s and 1930s, and thought about how we try to preserve memory by framing a moment. Then I thought about how July 19, 2013 was itself going to be preserved, a celestial alignment snatched from time as seen from deep in the Solar System.

Carolyn Porco, who serves as imaging team leader for the Cassini Saturn orbiter, calls July 19 ‘a day for all the world to celebrate.’ Cassini will look back at our planet and snap our picture in natural color next to the fabulous system of rings and moons it’s been showing us all along. Thus a pixel from Cassini’s 1.44 billion kilometers will become an opportunity for reflection, for unlike the ‘Pale Blue Dot’ image taken by Voyager 1 back in 1990, this snapshot, actually a mosaic, has been announced in advance. I had hoped to write about it yesterday but got caught up in non-space related work and managed no post at all. But looking forward or back, the image is still worth celebrating.

Porco was part of the ‘Pale Blue Dot’ team that was so memorably treated in Carl Sagan’s book of the same name, so her thoughts have weight. Of the new effort, she says this:

“My sincere wish is that people the world over stop what they’re doing at the time the Earth picture is taken to revel in the sheer wonder of simply being alive on a pale blue dot of a planet, and to appreciate the ever-widening perspective of ourselves and our world that we have gained from our interplanetary explorations. We are dreamers, thinkers, and explorers, inhabiting one achingly beautiful planet, yearning for the sublime, and capable of the magnificent. Let’s celebrate that, and make this one day a day the whole Earth smiles in unison.”

Indeed. Narrow and wide-angle images of the Earth will be taken from 2127 to 2142 UTC (1727 and 1742 Eastern time in the US) on the 19th. Around that time yesterday, as I thought out this post, I was having a gin and tonic after a day that had proven stressful both mentally and physically. I sat out on the deck with a fine, gentle breeze rustling the trees and thought about framing moments in time, and how in one particular moment our home world — all of it — will be captured by an exquisite technology.

North America and part of the Atlantic Ocean will be illuminated when Cassini records its mosaic of the Earth as Saturn is backlit by the Sun. A 2006 Cassini image had also shown the Earth from Saturn space but this new imagery will be the first taken in natural color, as human eyes would see it, and represents the first time images of Earth and Moon have been taken with Cassini’s highest resolution camera. We should wind up with something like this: 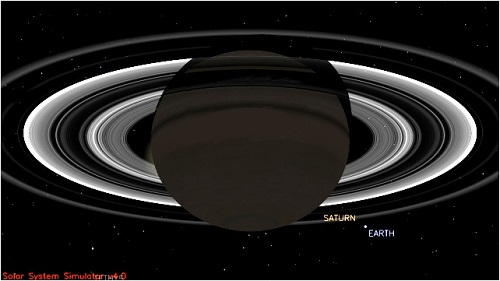 Image: A simulated view from NASA’s Cassini spacecraft on July 19, 2013, showing the expected positions of Saturn and Earth around the time Cassini is taking Earth’s picture. Credit: NASA/JPL.

The old photos in the chest in my living room are all filled with memories, people walking at the edge of a great river in western Illinois, the building where my dad built his coffee company in St. Louis, the snapshots he and my mother took on a cruise to South America. I can see relatives I only dimly remember still young, standing by Buicks and Packards, getting ready to go to war.

Our space-based images point to both past and future. Looking back at our planet frames us as a species awash in immensity, but one beginning to leave its world and reconfigure its perspective. We note the grand accomplishment of the images we take but are inevitably reminded how close Saturn is to the Earth in terms of interstellar distances. Then we compare the past images of our pale blue dot to the pixels of places we have yet to visit. Thus the haunting view of Alpha Centauri that Cassini made some five years back. Below, Centauri A and B are clearly visible over the horizon of Saturn, though the red dwarf Proxima Centauri is too faint to be distinguished.

Saturn is 30,000 times closer than the Alpha Centauri stars. We have evidence of but one planet there and even that has yet to be confirmed, so we are much in the dark. Cassini’s new picture of Earth will show us our own world from a distance that renders its features as unknowable as whatever planetary systems may exist 4.3 light years away. The Cassini images of these two places are not about discovery but about reflection. They should spur our philosophy as much as our curiosity. We bring meaning to our quest for knowledge when we look both forward and back, remembering what has been and who we are, while anticipating what we are to become.