Gliese 667C keeps getting more interesting. In the past we’ve looked at studies of this star in a triple system just 22 light years away, work that had identified three planets around the star. As one of these was in the habitable zone, this small red dwarf (about a third of the Sun’s mass) quickly engaged the interest of those thinking in terms of astrobiology. Now we get news that GJ 667C may actually host up to seven planets, with three evidently in the habitable zone.

I would say Mikko Tuomi (University of Hertfordshire, UK) is guilty of a bit of understatement. He’s quoted in this ESO news release thusly:

“We knew that the star had three planets from previous studies, so we wanted to see whether there were any more. By adding some new observations and revisiting existing data we were able to confirm these three and confidently reveal several more. Finding three low-mass planets in the star’s habitable zone is very exciting!”

Exciting indeed — we’ve never found three super-Earths within the same star’s habitable zone, in this case a realm closer to the parent star than the planet Mercury in our system. The work drew on data from the UVES spectrograph on ESO’s Very Large Telescope (Chile), as well as the Carnegie Planet Finder Spectrograph at the Magellan II site in Chile, the HIRES spectrograph on the 10-meter Keck instrument on Mauna Kea, and previous data from the HARPS (High Accuracy Radial velocity Planet Searcher) on the ESO 3.6-meter instrument in Chile.

What we wind up with after a thorough analysis of the radial velocity data for GJ 667C are five signals described by ESO as ‘very confident,’ with a sixth signal that is tentative and a seventh that is more tentative still. From the paper:

— – Up to seven periodic signals are detected in the Doppler measurements of GJ 667C data, being the last (seventh) signal very close to our detection threshold.
— The signiﬁcance of the signals is not affected by correlations with activity indices and we could not identify any strong wavelength dependence with any of them.
— The ﬁrst six signals are strongly present in subsamples of the data. Only the seventh signal is unconﬁrmed using half of the data only. Our analysis indicates that any of the six stronger signals would had been robustly spotted with half the available data if each had been orbiting alone around the host star.

The habitable zone here is found to lie between 0.095–0.126 AU and 0.241–0.251 AU. Two planets exist on the star-side of the habitable zone, three within it, and the last two further out in the system. The assumption here, echoed by ESO, is that all five of the inner planets including the three in the habitable zone are tidally locked, with one side in permanent sunlight and the other in darkness. The skies above one of the habitable zone planets could present an interesting view indeed, as the ESO artist’s impression below conveys.

I want to look more closely at the author’s conclusions on the three habitable zone planets, starting with planet c, which is closer to the inner edge of the HZ than the Earth is in our system. Global climate here would depend upon the properties of the atmosphere:

If the atmosphere is thin, then the heat absorbed at the sub-stellar point cannot be easily transported to the dark side or the poles. The surface temperature would be a strong function of the zenith angle of the host star GJ 667C. For thicker atmospheres, heat redistribution becomes more signiﬁcant. With a rotation period of ∼ 28 days, the planet is likely to have Hadley cells that extend to the poles (at least if Titan, with a similar rotation period, is a guide), and hence jet streams and deserts would be unlikely. The location of land masses is also important. Should land be concentrated near the sub-stellar point, then silicate weathering is more eﬀective, and cools the planet by drawing down CO2 (Edson et al. 2012)….

The authors describe planet f as ‘a prime candidate for habitability’:

It likely absorbs less energy than the Earth, and hence habitability requires more greenhouse gases, like CO2 or CH4. Therefore a habitable version of this planet has to have a thicker atmosphere than the Earth, and we can assume a relatively uniform surface temperature. Another possibility is an “eyeball” world in which the planet is synchronously rotating and ice-covered except for open ocean at the sub-stellar point (Pierrehumbert 2011).

And finally, about planet e, which receives:

…only a third the radiation the Earth does, and lies close to the maximum greenhouse limit. We therefore expect a habitable version of this planet to have > 2 bars of CO2. The planet might not be tidally locked, and may have an obliquity that evolves signiﬁcantly due to perturbations from other planets. From this perspective planet e might be the most Earth-like, experiencing a day-night cycle and seasons. 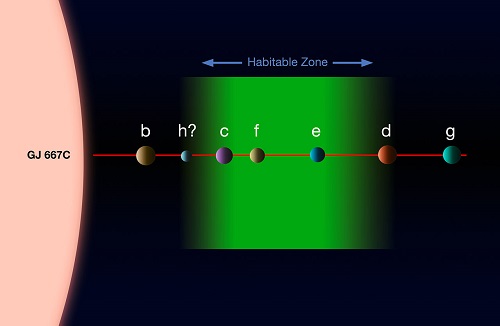 Image: This diagram shows the system of planets around the star Gliese 667C. A record-breaking three planets in this system are super-Earths lying in the zone around the star where liquid water could exist, making them possible candidates for the presence of life. This is the first system found with a fully packed habitable zone. The relative approximate sizes of the planets and the parent star are shown to scale, but not their relative separations. Credit: ESO.

Nature of the Super-Earths

As to the composition of the super-Earths around GJ 667C, the authors note the ‘packed configuration’ of the system, with all planets inside 0.5 AU, and go on to say:

…the planets either formed at larger orbital distances and migrated in (e.g. Lin et al. 1996), or additional dust and ice ﬂowed inward during the protoplanetary disk phase and accumulated into the planets Hansen & Murray (2012, 2013). The large masses disfavor the ﬁrst scenario, and we therefore assume that the planets formed from material that condensed beyond the snow-line and are volatile rich. If not gaseous, these planets contain substantial water content, which is a primary requirement for life (and negates the dry-world HZ discussed above). In conclusion, these planets could be terrestrial-like with signiﬁcant water content and hence are potentially habitable.

Is GJ 667C the first among many M-dwarf systems containing several potentially habitable worlds each? The authors speculate that this is the case, and if that is so, then we may ultimately learn that life is more common on worlds around these small red dwarfs than around any other class of star. It’s a notion worth thinking about, given that M-dwarfs make up perhaps as much as 80 percent of the stellar population.

It’s worth mentioning that this study includes a reanalysis of earlier data that underlines the growing power of our archived observations to inform new work. Thus Guillem Anglada-Escudé (University of Göttingen), who worked with Tuomi on this project: “These new results highlight how valuable it can be to re-analyse data in this way and combine results from different teams on different telescopes.” The new tools of digital storage and analysis mean that we are gathering data at a clip far beyond what we can exhaustively analyze, meaning that surprises may await in numerous datasets when weighed against hints from new studies.

The paper is Anglada-Escudé et al., “A dynamically-packed planetary system around GJ 667C with three super-Earths in its habitable zone”, accepted for publication in Astronomy & Astrophysics.