The star Gliese 667C is as intriguing as it is because it underlines in triplicate the ‘habitability’ question, which surfaces every time a planet is discovered in a zone around its star where liquid water could exist on the surface. This is the classic definition of ‘habitable zone,’ meaning not so much a place where humans could live — we have no knowledge of other conditions on these worlds, knowing little more than their minimum mass — but a place where a basic condition for life as we know it is possible.

I’m much in favor of considering exotic environments for life, and these would include venues ranging from the upper clouds of Venus to the depths of the icy gas giant satellites in our own system. But when we read about ‘habitable zones’ in most scientific papers, we’re usually falling back on the liquid water criterion because it’s hard enough to search for any kind of life on a distant world, much less a kind that we don’t even know exists. Liquid water is a starting point, a baseline in the search for life-supporting worlds, but it hardly means the hunt for life stops there.

My own speculations about systems like GJ 667C become purely imaginative. I notice how many systems we’re finding that have ‘super-Earths,’ a category of planet that doesn’t even appear in our own Solar System. I also note that small M-dwarfs can produce clusters of planets that, in the case of GJ 667C, are close enough that three can be squeezed into the habitable zone. Imagine a civilization emerging on one such world, with other possible life-bearing planets so tantalizingly close — what a boost that would give to the proponents of the local space program! 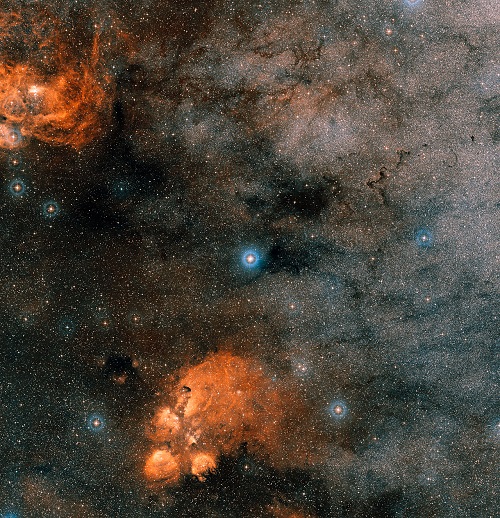 Image: This picture shows the sky around multiple star Gliese 667. The bright star at the centre is Gliese 667 A and B, the two main components of the system, which cannot be separated in this image. Gliese 667C, the third component, is visible as a bright star, very close and just under A and B, still in the glare of these brighter stars. The very subtle wobbles of Gliese 667C, measured with high precision spectrographs including HARPS, revealed it is surrounded by a full planetary system, with up to seven planets. Credit: ESO/Digitized Sky Survey 2. Acknowledgement: Davide De Martin.

In Are We Alone, a fine essay in Aeon Magazine, astrobiologist Caleb Scharf (Columbia University) places the exoplanet hunt in a cosmic context. We may be getting used to them now, but the early proliferation of ‘hot Jupiters’ and now ‘super-Earths’ was not an expected outcome at the beginning of exoplanet detection — for that matter, the pulsar planets found around PSR B1257+12 in 1991 certainly raised eyebrows as orbiting the remnant of a once massive star. Scharf points out, too, that 70 Virginis b and 16 Cygni Bb, discovered not long after the detection of planets around 51 Pegasi in 1995, were moving on highly elliptical orbits.

These wonderful finds — and news like GJ 667C delivered yesterday — keep reminding us that the old idea that our Solar System is somehow representative of what we’ll find elsewhere is deeply flawed. Says Scharf:

Many exoplanets… follow orbits that are far more elliptical than any followed by the major planets around our Sun. More puzzling still, the most frequent type of configuration, the one that has earned the moniker of ‘the default mode of planetary formation’, is that of closely packed worlds, on orbits that take mere days or weeks to loop around their stars. These compressed versions of our own system seem, for now, to be far more normal than our own. But if we’re not normal, what are we? That’s a question we can’t answer yet, because our census of stars and planets is still woefully incomplete.

Back to the habitability question. With the prospect of tens of billions of stars in our galaxy harbouring planets of Earth-size and into the super-Earth range, we live in a universe that gives us the chance to find out whether life is rare or common. Being in a habitable zone does not mean a planet sustains life, and it will be the job of our next-generation instruments to help us study planetary atmospheres so we can unlock the numbers on just what the odds are. Scharf speaks of an ‘equation for abiogenesis’ that we can search for throughout a galaxy that accommodates us by giving us a vast number of targets. We can thus take a measure of our own significance:

If we lived in a cosmos with only a few planets, we could never deduce the true probability of abiogenesis with any precision, even if they all harboured life — as imagined by earlier advocates of plurality. We might never be lucky enough to find one of these worlds within examining range, and all would be lost among the stellar fields of the Milky Way. The existence of billions of planets gives us a chance to write the equation, a chance to pin down the relationship between habitability and actual habitation.

So the excitement of finds like the planets around GJ 667C isn’t that we have yet more evidence that clement places for life can exist in the cosmos. It’s that we have another target — at 22 light years a relatively close one — that we’ll eventually be able to use as we make the crucial call on life’s equations. In the coming century, a discovery in either direction, that life is a rarity or is as common as, well, planets in the habitable zone, will have profound implications for philosophy as well as practical action. It will guide our intentions as we develop the technologies to reach other stars