Starship Century: A Review of the Book

Could there be a more time-worn trope in science fiction than the arrival of colonists or explorers on a new world? The stage is set for adventure and the unwinding of whatever plot theme the author has in mind, but if the planet is Earth-like, we see the colonists quickly settling in, adapting to local conditions and, in relatively short order, creating a new society. Back in the 1950s the film When Worlds Collide showed the arrival of desperate survivors of a doomed Earth on a planet that would be their refuge, the assumption being that from this point on, everything would be no more difficult than setting up a camp on some new continent.

Would it be so? For that matter, would our human crew be able to survive the journey? Paul Davies has his doubts, and he expressed them forcefully at the recent Starship Century event in San Diego. While we tend to concentrate on time and distance problems — how do you get something moving fast enough to get your crew to another star within a human lifetime? — Davies is more concerned with long-term survival and the creation of a truly self-sustaining ecosystem, not to mention what happens to that ecosystem when it mixes with its counterpart on an alien world. 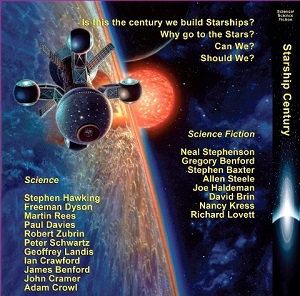 A huge part of the conundrum has to do with microbes. They account for almost all terrestrial species and thrive absolutely everywhere, down to kilometers below the surface. As Davies points out, microbes form a network of biological interactions that we know all too little about, into which are woven the equally complicated activities of viruses. We wind up with an ecological web of a complexity that defeats our best attempts at modeling. Thus the problem:

In the absence of sending the entire terrestrial biosphere, a fundamental unsolved problem arises: what is the minimum complexity of an ecosystem — dominated, as I have explained, by microbes — necessary for long-term sustainability? At what point, as more and more microbial species are dropped from the inventory of interstellar passengers, does the remaining ecosystem go unstable and collapse? Which microbes are crucial and which would be irrelevant passengers as far as humans (and their animal and plant food supply) are concerned?

Davies’ thoughts on this ‘Noah’s Ark conundrum,’ as he calls it, form the basis of his contribution to the Starship Century book, and you can see a video of his talk in San Diego online. The problem he outlines is one that won’t go away, for if we do solve the propulsion problem, what happens when we get light years from Earth only to discover that we left a bacterium behind that makes all the difference in keeping us alive? For that matter, can we predict how a sustainable ecosystem survives and changes in conditions of extreme long-term isolation?

The Fiction of Science

It’s one of the strengths of this collection of essays and short stories that it interweaves the science fictional impulse with the science. Thus Davies’ conjectures are anticipated by Richard Lovett’s story “Living Large,” which sketches a multi-century journey to the stars through the eyes of one of its future crew. Problems with closed-loop ecologies form the basis of the crew member’s interview with a journalist anxious to communicate starflight realities to the public, with all that means about radiation issues, efficiency in food production, recycling of nutrients and the rest. Through Lovett we see some of Davies’ key points illuminated in a tale that grew out of Lovett’s own thoughts on adapting to changing and ultimately alien ecosystems.

It was Freeman Dyson who said “Science is my territory, but science fiction is the landscape of my dreams.” Many of us, even those who do not claim science as native turf, can second that assertion about science fiction and dreaming. It is the sheer audacity of science fiction to take us out of the conventional world and into alternative possibilities that are vividly realized and challenge us to question our assumptions. Thus Nancy Kress’ “Knotweed and Gardenias,” a cautionary tale about a deep space mission whose crew begins to show behaviors that are inexplicable. Can they find the one thing mission planners left out of their own artificial ecosystem?

Readers with a taste for Heinlein will take huge pleasure in seeing a rough and vigorous future sketched out in Gregory Benford’s “The Man Who Sold the Stars,” a lively tale whose title makes a nod to Heinlein’s “The Man Who Sold the Moon.” Like Heinlein’s Delos Harriman, Benford’s Harold Mann is driven by his own inner compulsions to make things bigger, better and more innovative than ever before, creating a series of business breakthroughs that range from nanotech applications in orbit to asteroid mining, high-tech profit hunting all in the service of an innate drive to push boundaries or, as Mann says, “Man’s got to throw long in this life.”

“If you’re young and lean,” Harold’s future wife tells him, “things can fail and you still keep going. For the big space companies, the whole competition is just getting the government contract, then it’s all risk aversion. It’s not at all about doing something cool, first to market, then making money so you can do more. That is what I like: not playing it safe. To shift gears, to follow your nose.”

As indeed she does in a lifetime with steadily expanding technologies that eventually take her and her husband on an improbable journey to the nearest star. Along the way the roadblocks thrown by bureaucrats, hostile competitors and public indifference are progressively overcome, and we watch the development of a Solar System infrastructure enabled by the production of nuclear thermal rockets that become the Conestoga wagons of an expanding spaceward push. But as the tale shows, it takes more extreme measures when the distances become interstellar.

Geoffrey Landis, a crack science fiction writer who also favors this book with a poem, puts the focus on nuclear thermal technologies in an essay that explains the limitations of the chemical rocket and the technologies that can surmount it [video]. Both Landis and Adam Crowl touch on these matters, with Crowl offering a comprehensive overview of starship ideas in the literature — more about the Crowl essay later this week — while Landis homes in tightly on a technology that’s exceedingly simple. Gas is moved over a hot reactor core, to be expanded and pushed out a nozzle to produce thrust. Landis calls it the “spaceship equivalent of a pickup truck.”

Water is abundant in the outer system… After all, once you get far from the Sun — roughly past the middle of the asteroid belt — water ice is just another kind of rock. Closer in to the Sun, many asteroids have water as part of their composition in the form of water of hydration. So you can refuel your nuclear rocket using hydrogen generated from harvesting rocks in the Trojan asteroids, or short period comets — and, since you have a transportation system, you can haul fuel wherever you need it in the inner Solar System as well. You can either use electrolysis to split out the hydrogen for reaction mass — or, if you want higher thrust but can afford lower performance, you can use water (or ammonia — another ice common in the outer reaches of the Solar System) as the reaction mass.

Thus we get the space-age ‘Silk Road’ trading routes of space, with our craft going out to the outer system, gathering up the water to split into hydrogen and oxygen, and bringing it into the inner system. Our ships return from the outer dark laden with fuel, water for life support and the myriad uses of industrial processing. Landis runs through the history of nuclear thermal designs at NASA, considering the NERVA (Nuclear Energy for Rocket Vehicle Applications) work of the 1960s that produced designs (and tests on) a number of nuclear rockets. Including the Rover program, NASA did 28 full-power test firings of nuclear engines at the Jackass Flats test site in Nevada. We’ve never flown them, but these rocket engines have been thoroughly tested.

Landis’ thoughts on a bi-modal rocket, one that uses the heat of the nuclear core when high thrust is needed and otherwise taps nuclear power to run an ion engine, show us the kind of rocket that might one day colonize the Solar System. Just how nuclear thermal fits into the wider panorama of deep space propulsion concepts is something we’ll be talking about in coming days not only with Jim Benford’s thoughts on solar and beamed-sail missions but also with a long look at Adam Crowl’s survey of interstellar concepts, ideas that range from fusion through sails and into exotic possibilities like particle beam propulsion and interstellar ramjets. I also want to discuss Martin Rees’ thoughts on where we are going and revisit Freeman Dyson’s provocative speculations about what might happen at the edge of the Solar System.

The Case for Deep Space

Two other titles that meld science and science fiction come quickly to mind, the first being Project Solar Sail, a 1990 book edited by Arthur C. Clarke, and the more recent Going Interstellar, edited by Les Johnson and Jack McDevitt. Starship Century puts an exclamation point on the idea with a series of thought provoking essays and compelling science fiction tales that link thematically to the idea of building a pathway that will eventually take us to interstellar flight through wise use of Solar System resources.

With authors like Martin Rees, Freeman Dyson, Neal Stephenson, Stephen Baxter, David Brin, Ian Crawford and John Cramer, the ideas fly, and it was delightful to see an old favorite, Joe Haldeman’s “Tricentennial,” reprinted long after its 1976 appearance in Analog (and also delightful to see that it has lost none of its punch). The profits for Starship Century go toward “experiments, theory and concept studies” involving interstellar flight at a time when interest in space-related technologies seems to be surging, as witness the success of Planetary Resources’ recent fundraising, and the suddenly burgeoning series of upcoming conferences which includes Starship Congress in Dallas this August as well as the 100 Year Starship Symposium in Houston this September. Starship Century should further ramp up public interest. It is a provocative cri de coeur that belongs on the shelf of anyone with an interest in starflight.