Focus on the Sail

The British geneticist and biologist J.B.S. Haldane has left us with one of the more memorable lines about scientific inquiry, one that draws on the richest of all of Shakespeare’s plays for its punch. Hamlet tells Horatio that there are more things in heaven and Earth than are dreamt of in his philosophy (Act 1, Sc. 5), a thought Haldane adapts in the service of intellectual surprise. In his collection Possible Worlds and Other Essays (1927), he writes:

I have no doubt that in reality the future will be vastly more surprising than anything I can imagine. Now my own suspicion is that the universe is not only queerer than we suppose, but queerer than we can suppose … I suspect that there are more things in heaven and earth than are dreamed of, or can be dreamed of, in any philosophy. 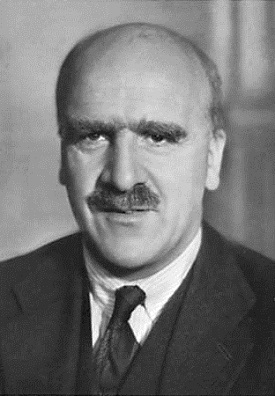 We can imagine Olaf Stapledon nodding as he read those lines. Haldane sketched out a human history covering the coming 40 million years in his essay “The Last Judgement,” one that Stapledon drew on in creating his own Last and First Men (1930). We can also imagine the reader surprise that probably met Haldane’s use of solar sails as a way of getting around the Solar System, all part of the same essay, in which Venusian colonists (after the demise of the Earth) contemplate crossing to a passing star on beams of the Sun’s light.

Image: John Burdon Sanderson Haldane (1892–1964), who gives us one of our earlier references to solar sails as a way of reaching the stars.

In Defense of the Sail

These days we have seen solar sailing in action through the Japanese IKAROS mission and the smaller NanoSail-D project from NASA, even as larger sails have been constructed for ground tests and we look forward to a late 2014 launch of NASA’s Sunjammer, which will deploy a sail 38 meters on a side (the sail’s name comes from an Arthur C. Clarke story that envisioned a race to the Moon using solar sails, one that ends with the abandoned ship being targeted for interstellar space). Solar sails, in other words, are not — like fusion, like antimatter — propulsion systems of the future. They’ve reached flight status for deployment and testing in space.

These sails work because light, although it has no mass, can impart momentum. If we can make the necessary upgrades in materials to enable a close pass by the Sun (perhaps with the aid of an occulter to shield the craft at perihelion), we can imagine driving a sail deep into the Solar System at speeds of several hundred kilometers per second. But as Jim Benford shows in his essay “Sailships” in Starship Century, we need to go much faster for an interstellar mission, and that involves beaming energy that will produce force at great distances.

I say this because sailships have a singular advantage: they leave the engine behind. So we can build a spacecraft that consists of only payload and structure — no fuel at all. The propellant is light itself, so sails reflect light waves, whether visible or microwave or laser produced, from a beam generated elsewhere. Sails can be made both light and smart, in the sense that control systems, sensors and computational ability can be embedded in the structure of the sail itself — a smart sail, with dispersed circuitry, and therefore far harder to damage by meteors or accident.

All this makes a solid case for sail technologies, and so does the fact that in the year 2000, Benford and his brother Gregory produced laboratory data showing that carbon sails could be driven by microwave beams to produce accelerations of several g’s. When I wrote about this work in Centauri Dreams (the book), I was struck by the fact that this laboratory work demonstrated beam-riding, in which the pressure of the beam and the concave shape of the sail work together to produce a sideways restoring force. The sail can also be stabilized against yaw and drift because the beam being directed at it can carry angular momentum that can be imparted to the spacecraft, thus spinning it.

Benford looks at issues of stability, deployment and large-scale space construction for sails and the beam sources that drive them, all of which demand a stable infrastructure to build upon. But the fact that we already have sails capable of space deployment points toward building experience with sail engineering and in particular materials as we learn to optimize our work with carbon nanotubes and carbon micro-truss structures. It’s an intriguing thought that, sails being large structures we will learn to work with in space, their growth should also help in the development of large transmitting antennae of the kind we will eventually need to build.

A stair-step series of beamed power applications builds the groundwork for the sail infrastructure, one that grows out of engaging commercial interests:

In today’s frugal climate, it is important for technology development to be coupled to commercial applications. Several of the missions we’ve described are potentially commercial matters. Starting with orbital debris mapping, one can see an incremental commercial development leading first to satellite power recharging. Eventually, as the space market and business confidence grows and capital becomes more available, this development plan leads to the repowering of satellites in GEO and ultimately to launch services. Investment costs are minimized because the research program leads to applications, which feed capital back into research, leading to new applications.

Ultimately, we’d like to build a true beamer — the source of the laser or microwave beam we’re sending to the sail — that would be assembled in space from materials mined from the moon or from asteroids. Placing the beamer in a close solar orbit would maximize the power available. The beauty of the beamed energy concept is obvious: Early fusion designs like Daedalus could carry a payload that was less than one percent of its initial mass, while sailship payload masses can be considerably higher. After all, we’re leaving the propellant behind us in the Solar System. Moreover, a single beamer, once established, could be used for many sailship missions.

Imagine, then, future sails many kilometers in diameter that are deployed by spinning up the initial, folded package and, in close proximity to the beamer, are pushed out by laser or microwave beam. The acceleration quickly increases as the beam stays fixed on the sail for hours, then days. As the sailship reaches the outer Solar System, the beam switches off and the spacecraft is launched on its interstellar journey, perhaps stowing the sail for cruise. The fact that electromagnetic waves can transfer power over long range makes this scenario possible. 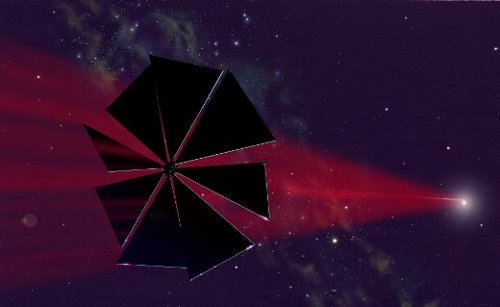 Fusion, Benford notes, is still struggling with physics and engineering issues, so that cost estimates for continued research and development are wide open. If the idea is to solve the physics, then tackle the engineering questions and finally look at the economic feasibility, then sails have the edge. We know the basic physics and have an engineering requirement that demands large antenna and optical arrays, along with assembly of our photon sources. Usefully, we have considerable experience in the sub-systems that are a foundation of this work.

We often think of beamed sail concepts in terms of gigantic structures like the Fresnel lens that Robert Forward wrote about in the outer Solar System, thousands of kilometers in diameter and massing half a million tons, or his 75,000 ton staged laser sails destined for Epsilon Eridani. But researchers like Geoffrey Landis have gone to work on Forward’s concepts using high-temperature materials like boron and carbon that would allow better acceleration, and proposing a string of lenses that would drastically reduce the size of the Fresnel lens.

The theoretical work continues as we press on with our early sail deployments. J.B.S. Haldane had no doubt that the future would surprise him, and doubtless the fiction of Olaf Stapledon took his thoughts in directions he could never have anticipated. We will learn in the coming century whether the audacious idea of a sail being pushed between the stars is another Haldane whim that nudges our philosophy, pointing to a workable approach to crossing the interstellar gulf.

Next post: Red Dwarfs: Clouds in the Habitable Zone