How close can a planet be to its star and still be habitable? If by ‘habitability’ we mean liquid water on the surface, with whatever consequences that may bring on a particular world, then it’s clear that the answer is partially dependent on clouds. We’ve developed one-dimensional models that can study the effect of clouds in various exoplanet environments, but they’re unable to predict cloud coverage, location or altitude. A new paper now describes a three-dimensional model that can make such calculations about atmospheric circulation, with interesting results.

Focusing on planets around M-class dwarf stars, Jun Yang and Dorian Abbot (both of the University of Chicago) and Nicholas Cowan (Northwestern University) are quick to note that red dwarfs like these constitute perhaps 75 percent of all main sequence stars. Current data (based on the work of Courtney Dressing and David Charbonneau) suggest that there is an abundance of Earth-size planets in the habitable zone — one per star — around M-dwarfs. The close orbits and deep transit depth of planets in the habitable zone here make them relatively easy to detect.

Yang, Abbot and Cowan put their model to work looking at the effect of water clouds on the inner edge of the habitable zone, with results showing that clouds can have a significant effect on cooling the planet, allowing liquid water to exist much closer to the star than was previously believed. Assuming M-dwarf planets close enough to be in the habitable zone will be tidally locked — with one side always facing the star — the team shows that the side of the planet exposed to the star would develop highly reflective clouds at the ‘sub-stellar’ region directly below the sun’s position in the sky. 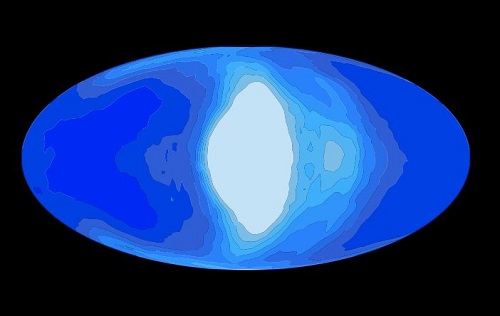 ‘High noon’ on an M-dwarf world, in other words, should produce clouds that have a significant cooling effect. Just how significant an effect is revealed in the paper’s conclusions:

We have performed the ﬁrst 3D global calculations of the eﬀect of water clouds on the inner edge of the HZ and predict that tidally locked Earth-like planets have clement surface conditions at twice the stellar ﬂux calculated by 1D models. This brings already detected planets, such as HD 85512 b and GJ 163 c, into the HZ, and dramatically increases estimates of the frequency of habitable planets. Adopting the planetary demographics from Figure 19 of Dressing & Charbonneau (2013), our revised inner edge of the HZ increases the frequency of habitable Earth-size planets by at least 50–100%. Crucially, we have also shown how this stabilizing cloud feedback can be tested in the near future with thermal phase curves from JWST.

The behavior of clouds on planets that are not tidally locked is going to be markedly different. The researchers believe that such worlds will have an albedo (reflectivity) similar to Earth’s because only part of the tropics and the mid-latitudes will be covered with clouds and the water content of the clouds will be small. But tidal lock produces clouds with high water content covering between 60 and 80 percent of the dayside, according to these models. The thickest clouds occur where light from the star is the most intense, thereby significantly increasing the albedo of the planet.

Such clouds, under conditions described in the paper, account for 73 K of cooling, thus extending the habitable zone despite the planet’s proximity to the star. What I like about this work is the possibility of testing it in the near-term using the James Webb Space Telescope, with which we can measure the temperature of M-dwarf planets at different points in their orbit. A planet without cloud cover will show its highest temperatures when the dayside is facing the telescope (with the planet on the far side of the star). Temperatures would be lowest when the planet comes around in its orbit to show its dark side to the telescope.

But a planet with highly reflective clouds on the dayside will be different, says Jun Yang:

This University of Chicago news release points out that we can see the same effect on Earth when looking at places like Brazil or Indonesia from space. An infrared instrument will find unusually cold conditions when it observes the cloud deck, which is at high altitude. Temperature variations of this kind from an exoplanet around an M-dwarf would indicate clouds and confirm the presence of liquid water on the surface. Thus three-dimensional simulations of the way air and moisture move through the atmosphere extend the potential habitable zone in the star’s direction.