‘A Terrible Beauty’ Among the Stars

Martin Rees’ ideas on how humans will adapt to starflight, discussed here yesterday, offer plenty of ground for speculation and good science fiction. After all, the path ahead forks in many directions, one of them being the continuing development of artificial intelligence to the point where ‘artilects’ rather than humans become the logical crew for star missions. If decades or even centuries are needed to cross to another system, then this gets around the problem of keeping people sane and cooperating across what might be generations of voyaging.

Another fork is biological, with humans being gradually engineered to make them more adaptable to environments they’ll find at their destination. Here we can imagine crews sent out in some kind of deep hibernation, their biology tweaked to allow a ready transition to the new planet. Or perhaps cyborg solutions suggest themselves, with humans augmented by digital technologies to deal with problems and interface directly with critical shipboard computer systems. 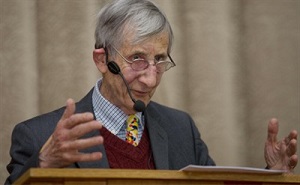 I always think of Freeman Dyson when speculating about these things because back in 1985, he lectured in Aberdeen on a one kilogram deep space probe that would be as much biological as mechanical, a genetically engineered symbiosis of animal, plant and electronics. Dyson saw the animal component as providing sensors and nerves and muscles for basic operations and navigation, while electronics dealt with communications and data return. The plant component offered a closed-cycle biochemistry fed by sunlight. Artificial intelligence would integrate all operations in a probe he described as ‘agile as a hummingbird, with a brain weighing no more than a gram.’

You can read about the concept in Dyson’s Infinite in All Directions (Harper & Row, 1988), and you might pair it with Anders Hansson’s paper “Towards Living Spacecraft,” which ran in the Journal of the British Interplanetary Society in 1996. In the same Starship Century volume as the Martin Rees essay is Dyson’s latest thinking on the matter, a lively piece called “Noah’s Ark Eggs and Viviparous Plants.” Like Rees, Dyson is captivated with the tools that molecular biology is giving us and sees them as a way to seed the universe with life, turning inhospitable venues into living worlds [video].

After all, we are now learning the language of the genome and have sequenced the genomes of several thousand species. As the speed of such sequencing increases and the costs decline, it will take no more than twenty years or so to sequence the genomes of all species now existing on our planet. It turns out that describing the entire biosphere does not take up all that much space. In fact, Dyson writes, the information content of the biosphere genome comes to something on the order of one petabyte, which is less than the amount of data held by Google. “The biosphere genome,” he writes, “could be embodied in about a microgram of DNA, or in a small room full of computer memory disks.”

The larger vision here is that we can’t talk about permanent human settlement away from Earth unless we learn how to grow complete ecosystems in remote places. Here’s the concept:

It is not enough to have hotels for humans. We must establish permanent ecological communities including microbes and plants and animals, all adapted to survive in the local environment. The populations of the various species must be balanced so as to take care of each others’ needs as well as ours. Permanent human settlement away from Earth only makes sense if it is part of a bigger enterprise, the permanent expansion of life as a whole. The best way to build human habitats is to prepare the ground by building robust local ecologies. After life has established itself with grass and trees, herbivores and carnivores, bacteria and viruses, humans can arrive and build homes in a friendly environment. There is no future for humans tramping around in clumsy spacesuits on lifeless landscapes of dust and ice.

But Dyson doesn’t stop at the kind of worlds we would consider suitable for humans. He’s talking about going well beyond this, designing biosphere populations that can survive in environments ranging from planetary moons to comets. He imagines future bioengineers designing biosphere genomes for such places (these are the Noah’s Ark Eggs of his title) and seeding them in venues like the outer Solar System, where warm-blooded plants that can collect energy from sunlight would begin the process of building an ecosystem. Many biospheres would fail but those that survived would evolve in unpredictable ways as they adapt to small, cold places without atmospheres. You can see that Dyson’s emphasis is on life at large, not just humans.

How would you engineer a warm-blooded plant? Dyson thinks even objects as distant as the Kuiper Belt could become homes for life if we can do something like this:

Two external structures make warm-blooded plants possible, a greenhouse and a mirror. The greenhouse is an insulating shell protecting the warm interior from the cold outside, with a semi-transparent window allowing sunlight or starlight to come in but preventing heat radiation from going out. The mirror is an optical reflector or system of reflectors in the cold region outside the greenhouse, concentrating sunlight or starlight from a wide area onto the window. Inside the greenhouse are the normal structures of a terrestrial plant, leaves using the energy of incoming light for photosynthesis, and roots reaching down into the icy ground to find nutrient minerals.

Comets have plentiful sources of carbon and oxygen along with nitrogen and other key elements. Sunlight at a distance of 100 AU is reduced by a factor of ten thousand, but even the human eye can concentrate incoming light onto a spot on the retina by a factor larger than a million. So Dyson is arguing that a mirror as precise as a human eye could keep a plant warm at distances even further out than the Kuiper Belt. These self-grown mirrors would, like sunflowers, track the Sun as it moves across the sky. Plants like these would also be viviparous, with the seeds developing into viable plants before being dispersed into the frigid waste around them.

Stop being provincial, Dyson is telling us: Instead of focusing on how to find or re-create exactly Earth-like conditions wherever you go, think about helping life itself to spread into environments where it does not now exist. Give life this chance and let evolution take over to lead where it will. Seeding the universe may lead to places utterly incapable of supporting people like us, but extend the tools of molecular biology far enough and the explorers of the far future may adapt themselves to the environments they have shaped. ‘A terrible beauty is born,’ Yeats once wrote about a different kind of transformation, but in that beauty may lie habitats for new beginnings.