Perspectives on Pluto and Charon

We’re just past the 35th anniversary of the discovery of Pluto’s moon Charon. Or more precisely, we just passed the July 7 date when the announcement of that discovery, which had actually happened in June of 1978, was made. That turned my thoughts back to Larry Niven’s story “Wait It Out,” which tells the tale of two astronauts who are stranded on Pluto’s surface. Removing his helmet to die quickly, the narrator discovers that he lives on in a strange semi-stasis, his brain now a superconductor. First published in 1968 (in All the Myriad Ways), the story contains no Charon, but the scene lingers with me. I’ll quote just a patch of it, though I’ve quoted it before:

All of that, coupled with the Charon anniversary, had me thinking about what Pluto’s surface would look like with the moon included. A couple of things come to mind here. Pluto’s axial tilt (obliquity) is 124 degrees, which means that Pluto’s rotational axis is nearly in the plane of its orbit. Charon orbits the dwarf planet in its equatorial plane. Recall too that the length of Pluto’s day is the same as the orbital period of Charon. The result: Charon always presents the same face toward Pluto and vice versa.

That may seem similar to our own Moon, but because Charon orbits over Pluto’s equator, it does not appear to move relative to the horizon. This Southwest Research Institute page on the Phases of Charon, written by Marc Buie, gives further background, but the point is that because Charon orbits Pluto in the same way that communications satellites orbit the Earth, there is never a moonrise from Pluto’s surface. Moreover, the moon is invisible over half the planet.

We wind up with a moon that undergoes regular phases. If the Sun were directly over Pluto’s equator at the start of Plutonian spring, then Charon at its ‘new moon’ phase would move directly in front of the Sun, to produce an eclipse. As it moves through the rest of its 6.4 day orbit, it would progress through a series of phases. The diagram below tells the story:

Image: The Sun crossed the equator in 1988 during the middle of a 6 year season of eclipses that would have been spectacular to watch. This marked the start of spring in the northern hemisphere and the full moon was really full. Credit: SwRI/Marc W. Buie.

But take a look at the start of summer in the Northern hemisphere (this will next happen in 2030). Here the Sun passes over 56 degrees north latitude, roughly where Scotland is on Earth:

And as Buie goes on to explain:

Another longer term cycle also affects the phases and that is Pluto’s orbit around the sun. Since Pluto’s rotation axis is tipped on its side, it has very pronounced seasons. Unlike our Moon, Charon also undergoes the same exact seasons. The only time you’d see a completely full moon would be at the start of spring or fall. At the start of summer or winter, just over half the surface would be illuminated at its fullest, either the north or south polar regions depending on the season.

Charon orbits some 19,000 kilometers away from Pluto. From its surface, Pluto is gigantic in the sky, more than 14 times as wide and with 200 times the area of our Moon in the sky, as Alan Stern notes in his latest PI’s Perspective for the New Horizons mission. We can thank James Christy and Robert Harrington (U.S. Naval Observatory) for the discovery of the largest moon relative to its planet in the Solar System. And we can thank New Horizons for the image below, showing Pluto and Charon as seen from the spacecraft. New Horizons was 550 million miles from Pluto, further than the distance between the Earth and Jupiter, when the photo was taken on July 1, giving us a bit of a gut-check on the distances just to our own outer system. 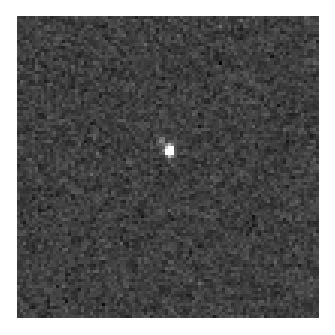 Two years from now, New Horizons will pass just over 12,000 kilometers above Pluto’s surface, where the LORRI imager will be able to spot features about the size of a football field. This is going to be a fascinating system to untangle. Charon’s interior is thought to be a combination of rock and water ice at about 50/50 proportions, while Pluto is far more rocky. The discovery of the largest moon began the study of this system as a double planet, one that is doubtless the result of a collision somewhat similar to what occurred in Earth’s early history to form our Moon. We can only imagine how much more we’ll learn as New Horizons closes the distance to its target.