Rayleigh scattering is what happens when light is scattered by particles considerably smaller than the light’s wavelength. Although it can happen in solids and liquids, it’s most obvious when it occurs in our sky, causing its blue color. We’re seeing the short blue wavelengths of sunlight scattered by oxygen and nitrogen molecules in the atmosphere, while red wavelengths are absorbed more strongly, hence less scattering. When you leave the atmosphere and go into space, the Earth appears blue because the oceans absorb red and green wavelengths more than blue ones, and thus we can see the reflected blue color of our sky.

But colors from within the atmosphere or beyond it depend on local conditions. The reddish sky shown by the Viking landers in 1977 was the result of iron-rich dust thrown up by the dust storms that are endemic to the planet. We can assume that the color of other planets as seen from space — think Jupiter or Venus — is the result of particles within their atmospheres. What we can’t assume is that any planet that looks blue from a distance is going to be a clement world like the Earth. That case is made emphatically by the much studied ‘hot Jupiter’ HD 189733b, a transiting planet that has become a laboratory for the study of exoplanet atmospheres.

We’re dealing with an exotic world, one that orbits its star at just one-thirtieth of the Sun/Earth distance, with an atmosphere reaching temperatures well above 1000 degrees Celsius and the subject of frequent battering by stellar flares. Radiation from the parent star is thought to be 20 times more powerful than that from our Sun, with an X-ray dose 3 million times higher than Earth receives. Because it is a transiting world, HD 189733b’s atmosphere can be studied as it leaves its signature on the primary star’s light during passage in front of and then behind the star.

The new work, led by Frédéric Pont (University of Exeter) now tells us that this savage world some 63 light years away would appear, if actually seen by human eyes, a deep azure blue. The measurements were made with the Hubble Space Telescope’s Imaging Spectrograph (STIS), which the team used to monitor how the planet’s light changed during its orbit. Tom Evans (Oxford University) is first author of the paper on this work:

“We saw the brightness of the whole system drop in the blue part of the spectrum when the planet passed behind its star. From this, we can gather that the planet is blue, because the signal remained constant at the other colours we measured.”

The study proceeded by examining the secondary eclipse, when the planet passed behind the star. Here’s a bit on the methodology from the paper:

… we measured the reﬂection signal by monitoring the change in brightness of the star-planet system that occurred during secondary eclipse. Unlike the primary transit, which allows us to probe the daynight terminator region of the atmosphere, the secondary eclipse signal is directly related to the brightness of the dayside hemisphere. Although secondary eclipses have been measured previously for HD 189733b at infrared wavelengths…, our new observation constitutes the ﬁrst measured for HD 189733b at short wavelengths, where thermal emission from the planet is negligible. Any detected light is therefore entirely due to scattering by the atmosphere. 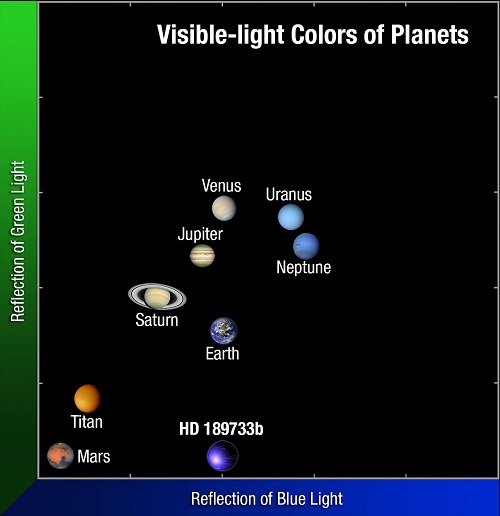 Image: This plot compares the colours of Solar System planets to the colour of the hot Jupiter HD 189733b. With the exception of Mars, the colours are primarily determined by the chemistry of the planets’ atmospheres. Earth’s blue atmosphere plus the blue tint of the oceans dominate our world’s hue. HD 189733b’s deep blue colour is produced by silicate droplets, which scatter blue light in the scorching atmosphere. Credit: NASA, ESA, and A. Feild (STScI/AURA).

The paper calls the color “…a deep, dark blue, quite distinct from the atmosphere colors seen in our solar system.” The blue may well be the result of silicate particles in the atmosphere, which scatter blue light. It’s also consistent with Pont and team’s earlier work on HD 189733b, which revealed the presence of high haze in the atmosphere and suggested red ‘sunset’ colors as the hue of HD 189733b’s sky. Sodium has previously been identified in the atmosphere and, because sodium absorbs red light and dust scatters red, this is an atmosphere that, according to this ESO news release, will redden light shining through it but turn reflected light blue.

As conducted by the Space Telescope Imaging Spectrograph, secondary eclipse observations are obviously a powerful tool. And in this case, HD 189733b once again proves a reliable touchstone on what can be accomplished to analyze the atmospheres of planets we cannot actually image. The paper is Evans et al., “The Deep Blue Color of HD189733b: Albedo Measurements with Hubble Space Telescope/Space Telescope Imaging Spectrograph at Visible Wavelengths,” Astrophysical Journal Letters Vol. 772, No. 2 (2013), L16 (abstract / preprint).