This is as strange a maze as e’er men trod,
And there is in this business more than nature
Was ever conduct of.

That’s Alonso in Shakespeare’s late masterpiece The Tempest, a king of Naples who finds himself on a remote island where Prospero weaves his magical powers. It’s an apt passage for Timothy Ferris to quote in his chapter “The Central Nervous System of the Milky Way,” a part of the 1992 collection The Mind’s Sky that was the basis of yesterday’s post. For in an unusual conclusion to the essay, Ferris wonders whether the real purpose of a galactic network (and hence an ultimate goal of SETI) isn’t passing along not only our science but our broader culture to other civilizations. “Who knows what importance our existence, or some shard of our thought, might have to a scholar or artist — whether biological or artificial in origin — in a remote galaxy in some far-future time?”

It’s a pleasing thought for a species used to feeling dwarfed by the universe, and it would apply to all intelligent species whose work might find an enthusiastic reception elsewhere. But I return to Ferris because his essay looks out on a vista that is conceivably not just interstellar but intergalactic. A long-term, evolving network, growing by virtue of the very traffic it handles, may come to approximate the galactic nervous system of the title. Reaching another galaxy with a series of self-reproducing probes would obviously take eons, a project well beyond the intent of a biological species perhaps, but not out of the question for an automated, growing mind. Would such a vast communicating web ever run out of topics to consider? From the essay:

“…on no level, even that of a pangalactic intelligence, could mystery ever be wholly banished. The observable universe — meaning that part of the cosmos within which light signals can at any given epoch be detected — is eternally smaller than the totality of the universe. Even if the entire Virgo Supercluster is embroiled in thought, a million galaxies buzzing with lanky synapses that take tens of millions of years to connect, that vast intelligence will always have more to learn, and forever have room to wonder. 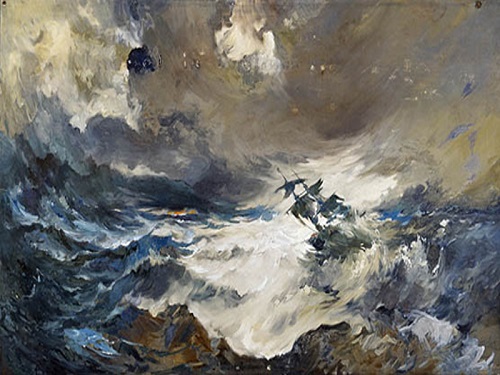 Image: The wreck of the Sea Venture off the Bermudas in 1609, an event thought to be an inspiration for Shakespeare’s The Tempest. Will works of human imagination one day flow through a galactic network, preserving our art, science and philosophy beyond the lifetime of our species? Painting by W. H. Harrington. Credit: Bermuda National Trust and Bermuda Maritime Museum.

The Problem of the Probe

But back to a much simpler network, the one formed by early self-reproducing probes as they expand outward from the home world of their builders. One objection to self-reproduction is that the probes in question eventually mutate, become virus-like in their spread and run essentially out of control of their makers, with results we cannot anticipate (Carl Sagan raised this issue back in the 1980s, speaking about strategies for colonizing the galaxy). Ferris thinks that intelligent builders will understand the problem from the start. They’ll put the network together under the same principles that telecommunication companies today work under, expanding infrastructure only at a pace demanded by traffic, with the network in charge of replication rates.

That very significant concern aside, the advantages of running a galactic network are manifest. For one thing, civilizations anxious to preserve their legacy will be committing their output to a growing library that will outlast all civilizations (just as, to use a pedestrian comparison, I take a certain comfort in knowing that every word I type on this keyboard is automatically backed up on multiple servers in the cloud). A second virtue is the network’s ability to shield participating civilizations. We’ve had the METI argument before and will have it again. Messaging extraterrestrial civilizations opens the sender up to the uncertainty of not knowing what forms of intelligence receive the signal, nor what the result of the attempted contact may be.

The galactic network, if it is designed with clever parameters, gets around this by duplicating its data throughout the entire system, working with a time span that grows as the constituent builder probes continue to reproduce and spread outwards. Information about the participant worlds can be, in Ferris’ view, filtered in whatever way the local civilization chooses, allowing a culture to share itself with a carefully modulated dose of privacy. Here the Internet metaphor that runs through Ferris’ thinking betrays him, as we all ponder how hackers move through our existing worldwide networks even as security specialists try to find the holes that let them in.

Imagine that we receive an invitation to join such a network on some future day. Do we accept it? Here I’m thinking of David Brin’s recent novel Existence, where the question of whether interstellar visitors are telling the truth — and speculations about why they might not — form a part of the developing conversation about the consequences of contact. What happens if our expansion into the cosmos creates encounters with not one but several civilizations, and what if they each give us a different narrative about what we as a culture need to do next?

No, I can see many reasons for being skeptical of the emissaries of a purported galactic network. On the other hand, there seem to be many reasons to think of building one ourselves, once we have such capabilities. Network terminals established at locations between known civilizations would make information exchange a bit easier as we and they tapped closer sources of data. And I like the spirit with which Ferris approaches this possibility:

One is communicating, of course, not with living beings but with a computer, but the computer is rich with information deposited there by living beings, and one should not underestimate the value of such an arrangement. I can enjoy a play by the late Samuel Beckett without fretting overmuch about the fact that I cannot correspond with Beckett, and if I read a book or watch a movie or run a computer program I am in a sense communicating with the authors of those creations, regardless of whether they are dead or alive.

In that sense, of course, it’s hard to see how any great author is truly dead. As long as the ideas are being transmitted and received, the unique perceptions of that personality are still available to us. Imagine the riches of a network created billions of years in the past, laden with the science and poetry of countless cultures, many of whom are doubtless long gone. It’s a heartening thought that such a thing could exist if civilizations live long enough to launch this kind of self-reproducing enterprise into the heavens. We saw yesterday that Geoff Marcy’s work will now extend to a search for extraneous optical transmissions from extraterrestrials at work. If successful, that search would tell us that intelligent life is out there, but a single flash in the night without the keys to the library — assuming there is one — will long remain an enigma.

The Sagan paper I refer to above was written with William Newman. It’s “The Solipsist Approach to Extraterrestrial Intelligence,” Quarterly Journal of the Royal Astronomical Society, Vol. 24, No. 113 (1983). Its point is that self-reproducing probes of the sort Ferris describes will never be built because they constitute a threat to their builders as well as other sentient species that encounter them. Fred Saberhagen’s ‘Berserker’ stories invariably come to mind.