I’ve come to believe that building the system-wide infrastructure we’ll eventually need for interstellar flight will depend on satisfying two imperatives: Planetary defense and astrobiology. The first demands the ability to move payloads quickly to distant targets, allowing plenty of time to change the trajectory of problematic objects. The second is all about science and answering key questions about our place in the cosmos. I know few people who think life doesn’t exist elsewhere, but if it really is out there, finding and cataloguing it will involve human crews operating deep in the Solar System.

After all, we’re learning how widespread internal oceans may be, and it’s possible that even places as remote as Triton may have spawned some kind of organisms. And while we’ve had our eye on Europa’s hidden ocean for some time now, Enceladus is a recent entrant into the astrobiology sweepstakes with its jets of water ice and organic particles emmanating from the so-called ‘tiger stripes’ at the south pole. The Cassini orbiter discovered the jets back in 2005, and we’ve been learning more ever since. Now Cassini’s VIMS instrument (Visual and Infared Mapping Spectrometer) has given us data showing that the plumes vary predictably over time. 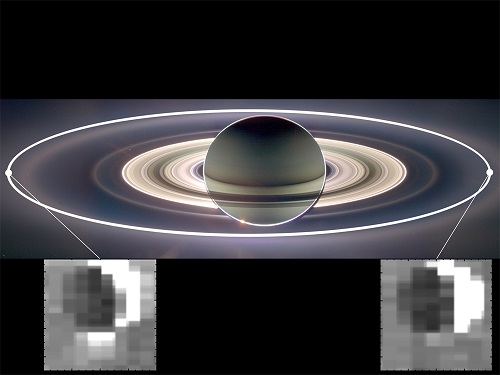 Cornell University’s Matt Hedman likens what’s happening to adjustable garden hose nozzles. As Enceladus orbits Saturn, the ‘nozzles’ in the south pole fissures close when the moon is closest to the planet, and open again as it swings further away. Think of Enceladus being alternately squeezed and released. The new findings confirm a variability in the plumes that had been long suspected but never observed until now, one that has implications for the moon’s internal structure. Says Christophe Sotin (JPL), a co-author of the paper on this work:

“The way the jets react so responsively to changing stresses on Enceladus suggests they have their origins in a large body of liquid water. Liquid water was key to the development of life on Earth, so these discoveries whet the appetite to know whether life exists everywhere water is present.”

Yes, and with New Horizons bearing down on Pluto/Charon, we’re soon going to learn whether there is evidence for internal oceans in this interesting binary system. One day, we’re going to investigate Kuiper Belt objects like Makemake and Haumea, the latter especially interesting because of its ellipsoid shape and the probability this was caused by an ancient impact. We may learn much by comparing and contrasting Haumea with other Kuiper Belt objects as we find out whether radiogenic heating could keep internal oceans liquid even in these environments.

Enceladus itself continues to teach us that objects once thought quiet can be active and filled with potential. The famous jets being sprayed from Enceladus turn out, when examined in the infrared, to be dimmest when the moon is at its closest point to Saturn, while three to four times as bright at its most distant point. Gravitational effects like these are now visible, thanks to Cassini, but they remind us of the unseen internal action taking place as the giant planet squeezes and relaxes tiny Enceladus, an energy source that has shaped the moon and perhaps created conditions hospitable to life.

The paper is Hedman et al., “An observed correlation between plume activity and tidal stresses on Enceladus,” published online in Nature 31 July 2013 (abstract).