The Model of the Universe

The creator of the Galaxy Garden (Kona, Hawaii), Jon Lomberg is an artist working in many media whose work continues to resonate in the space community and the public at large. Centauri Dreams readers will know that he worked with Frank Drake in designing the cover for the Voyager Interstellar Record and the sequence of 120 photographs and diagrams portraying Earth and its inhabitants (soon to become the first human artwork to leave the Solar System). But they’ll also remember COSMOS, the series for which Jon served as chief artist. In fact, he worked as Carl Sagan’s principal artistic collaborator for many years, including key work on the film CONTACT. Here Jon extends his ideas on nature, art and astronomy to venues much larger than the Galaxy Garden itself, a proposal that would model our staggeringly beautiful cosmos. For more on the concept, be aware that Jon discussed these ideas in his talk at the recent Starship Century conference, a video of which is available. 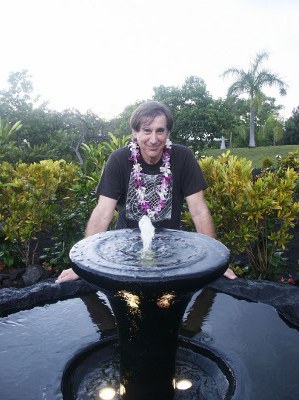 Astronomy daunts us with its distances. One mind-numbing number after another, equally incomprehensible. Do you have a good sense of the difference between 40 million and 140 million? Such quantities are difficult to scale and difficult to grasp.

One of the hardest concepts to convey is the scale of the Universe. Here is a proposal for a new way to address this problem.

THE MODEL OF THE UNIVERSE is a Pacific-wide system of beautiful and well-crafted markers that place extragalactic objects in an enormous scale model the size of the planet. The three dimensional model is projected onto the surface of the Earth, with the center of the Earth representing the location of the Big Bang in some higher spatial dimension. The center of the projected model is the Milky Way Galaxy Garden in Captain Cook, Hawaii. Scaled to the Galaxy Garden, a model of the Universe would be about the size of the Pacific Ocean.

Markers showing individual objects can be purchased, donated, sponsored, or built by the host business or organization. An umbrella organization and its website will provide educational materials explaining the project and providing, for example, announcements as new markers are added to the model.

The Local Group of Galaxies are scattered in the few square miles surrounding the Galaxy Garden in Honaunau. The Virgo Supercluster extends 20 miles out from the Local Group—approximately the distance between the Galaxy Garden and Kona International Airport. So all the various parks, businesses, schools, and beaches could be the site for the varied galaxies of the Virgo Supercluster.

This presents an opportunity to turn all of West Hawaii into a cosmological model of the Virgo Supercluster. The entire Big Island maps nearby superclusters. Astrotourists can spend part of their holiday exploring the extragalactic environment and getting a real sense of the relative distances to objects that are otherwise just hazily “somewhere out there.”

More distant clusters and cosmological objects are located as shown on the accompanying designs. NOTE: The mapping is preliminary only to suggest the concept.

If you are not familiar with the Galaxy Garden concept, please take a moment and have a look at www.galaxygarden.net. 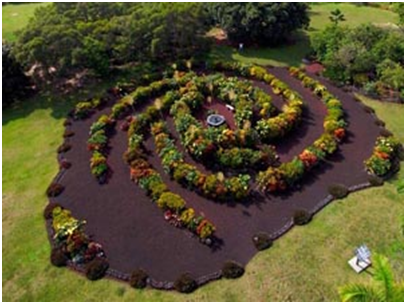 The GG is the world’s first large-scale explorable model of the Milky Way Galaxy. Scaled at 1000 light years per foot, this 100’ garden offers visitors a direct, sensory, intuitive way to understand the scale of the solar system compared to the galaxy. 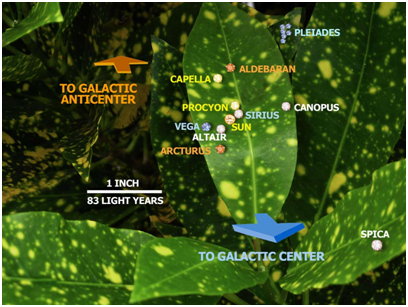 At 83 light years per inch, nearly all the stars visible to the naked eye are in a volume equivalent to a single leaf. Anyone, even a child, can understand the difference between a fraction of an inch and a 100’ garden surrounding. We have found that this conveys the scale of the Galaxy better than any other astronomy educational experience. 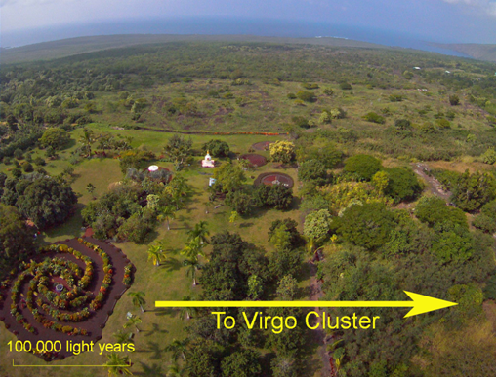 The Local Group of Galaxies are scattered in the few square kilometers surrounding the Milky Way in Honaunau. 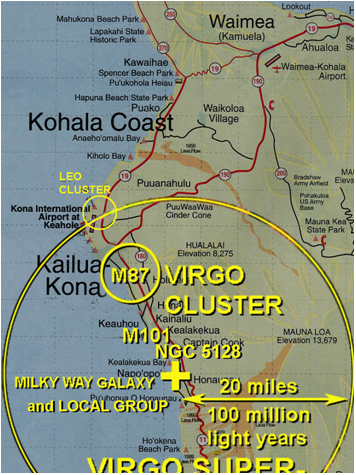 Traveling toward the town of Kailua-Kona from the Galaxy Garden, the extragalactic explorer encounters many famous galaxies, whose beautiful portraits are displayed on simple but elegant and sturdy markers. Astrotourists can spend part of their holiday exploring the extragalactic environment and getting a real sense of the relative distances to objects that are otherwise just hazily “somewhere out there.” 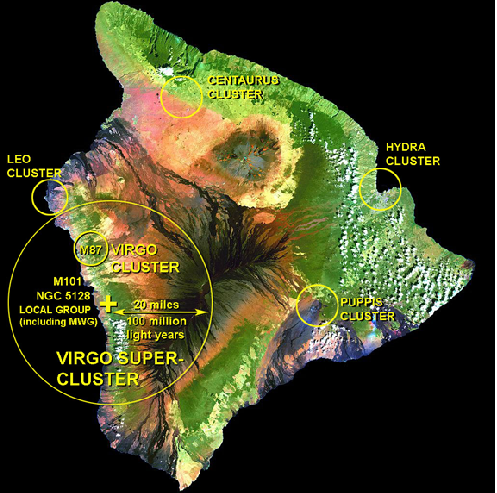 • NGC 5128, the brilliant radio galaxy Centaurus A, is located in Kealakekua Bay, famous historical site of Captain Cook’s visit, frequented by many tourists.

• Spiral Galaxy M101 is at the West Hawaii Community College.

• M87 is in the town of Kailua-Kona, perhaps on the grounds of the Hulihee Palace or in the lobby of the historic King Kamehameha hotel.

• Other superclusters could be located in Waimea, Hilo, and Volcano. 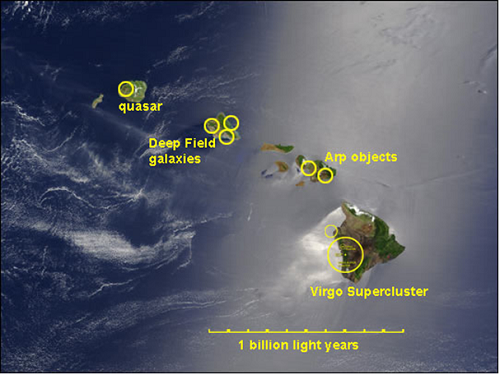 More distant objects are located on the neighbor islands, at appropriate tourist, educational, and community venues. 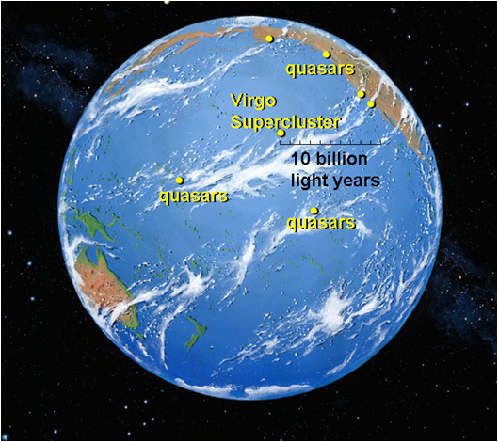 Objects at cosmological distances could be located at schools and science centers from Alaska to San Diego, as well as Tahiti (Point Venus?) and American Samoa.

Because the network projects the three-dimensional distribution of galaxies onto a spherical surface, the entire Earth becomes a model of the Universe with the center of expansion (the Big Bang) lying in a dimension not accessible from the model Universe. This provides a vivid educational metaphor that helps people to visualize the topology of the expanding universe and facilitates understanding of why there is no defined spot among the galaxies where the Big Bang took place. 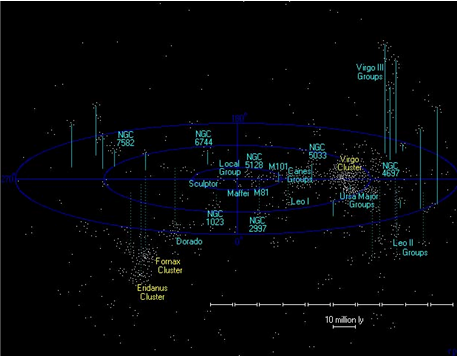 Reference 2: Other superclusters and voids out to 200 mly 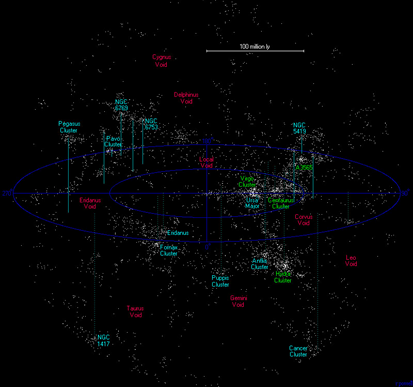 Conversion of Kona to Cosmic Distances