On the scale of Jon Lomberg’s Galaxy Garden, discussed here on Friday, the star GJ 504 is less than an inch away, representing some 60 light years. In fact, as Jon reminds visitors to the Garden in Hawaii, almost all the stars visible to the naked eye are contained in the volume equivalent of a single leaf. When I speak about interstellar matters I always try to find comparisons that get across the scale of the galaxy, but I can’t think of a better way to experience that scale than to walk through these gorgeous grounds near Kailua-Kona.

As I think about GJ 504 and the Galaxy Garden, I’m also reminded that Kona is the source of one of my favorite coffees, yet another reason for making the trip. But yesterday afternoon I roasted some excellent El Salvador beans and I’m settling in with a brightly flavored mug as I write, just the thing to kick off the week. I begin it with GJ 504 because a team from the SEEDS project (Strategic Explorations of Exoplanets and Disks with Subaru) led by Japanese astronomer Motohide Tamura (University of Tokyo) has just pulled off an important discovery, the least massive planet yet to be directly imaged, as opposed to detection by transit or radial velocity.

Image: Near-infrared color composite images of a “second Jupiter” around the Sun-like star GJ 504. A coronagraph and differential techniques suppress the bright light from the central star. On the left is the intensity image, which shows the radiant power passing through the area, while on the right is the signal-to-noise ratio image, which shows the weakest signal that the detecting system can recognize. Credit: NAOJ.

The star in question is a G-class object which, at 160 million years, is far younger than our Sun. In fact, the age of this system raises questions about the calculated mass of the planet. The SEEDS team comes up with a mass as small as three Jupiter masses, with the distance between star and planet being 44 AU, which would put it out around Pluto’s aphelion in our system. Is this a ‘second Jupiter,’ as this news release states? The answer depends on how accurately we can model a cooling giant planet, for the mass estimate depends upon the age of the host star and luminosity models for objects of planetary size. The paper notes that:

Because massive exoplanets cool and fade with time, direct-imaging searches have been most successful around young stars. Mass estimates for young planets depend strongly on the assumed system age, planetary atmosphere models, and initial thermodynamic state, leading to large uncertainties in the inferred mass.

GJ 504 is evidently old enough for different models – assuming different temperature ranges in early planet formation — to converge, which they do around the 100 million year mark. While the authors go on to say that “no fully established model for estimating the masses of directly imaged planets exists as of yet…,” they add that further direct imaging of older systems whose age is better determined will help us to remove many of these uncertainties.

Discovering worlds like this is going to provide ample fodder for planet formation theorists. Gravitational instability is a formation model that relies on fragmentation of the outer protoplanetary disk and subsequent collapse into a giant planet. The other model, core accretion, depends on planetesimals accumulating and acquiring a gas envelope from the protoplanetary disk. Both of these models run into problems this far out from the parent star, as both require a massive disk in the outer system. We have much to learn about the genesis of gas giants.

SEEDS is proving itself a useful window into outer planets and disk structures, with a plan to observe about 500 stars to develop statistical results on how common outer giant worlds are. But the work extends to protoplanetary disks and, because the mix of stars under investigation varies widely in age, should give us information about how both disks and planets evolve. As the project continues, we can marvel at the success of adaptive optics and coronagraphs at making observations this sensitive from Earth’s surface. It’s important work because direct imaging gives us information about a planet’s temperature, luminosity, atmosphere and orbit. 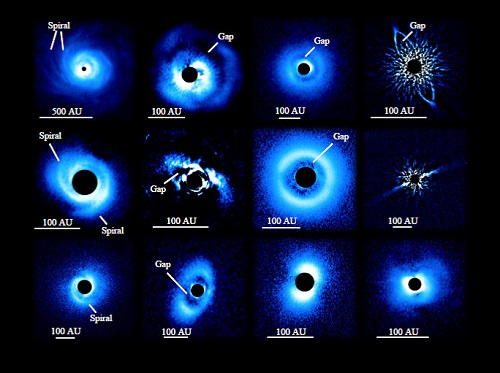 Image: Gallery of disks imaged in the near-infrared by Subaru SEEDS. Note the spirals and gaps in the disks that the images reveal. (Credit: NAOJ)

Interestingly, GJ 504b turns out to be another blue planet, an indication that its atmosphere is less cloudy than that of other directly imaged planets. Following up from the paper on this work:

…the relatively blue… color of GJ 504 b is consistent with T-type brown dwarfs in the same temperature range… which are representative of less cloudy atmospheres that could occur naturally in this temperature range… In addition, models examining cloud clearing as a function of temperature and surface gravity in Marley et al. (2012) do predict that a temperature of ∼500 K and log g of ∼4 [a measure of surface gravity], as expected for GJ 504 b… should lead to a clear atmosphere, while the properties of previously imaged planets place them in a cloudy regime. The cold and perhaps less cloudy atmosphere of GJ 504 b thus places it in a physically distinct state from the hotter and cloudier atmospheres of previously imaged planets, and should be highly interesting for further atmospheric studies in the future. These properties imply that GJ 504 b will become a benchmark object for the study of exoplanet atmospheres.

Also setting this world apart from the other directly imaged planets is its cold temperature and comparatively light mass. And while a planet three times as massive as Jupiter is a large world indeed, we can take heart from the continuing success of direct imaging campaigns as we ponder future instruments that will image smaller, Earth-class worlds.

The paper is Tamura et al., “Direct Imaging of a Cold Jovian Exoplanet in Orbit around the Sun-like Star GJ 504,” accepted for publication in The Astrophysical Journal (preprint).