A Prize for ‘Black Sky Thinking’ 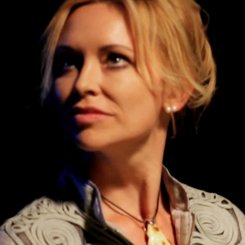 If you can get your head around the idea that architecture can ‘grow’ by using the tools of synthetic biology and ‘smart’ chemistry, you’ll see that what goes on inside a starship may be radically different from anything we’ve imagined before. Rachel Armstrong has done outstanding research in the area of sustainable solutions for both natural and engineered environments, and works daily on design issues raised by new materials. It’s not surprising to find Dr. Armstrong involved with Project Persephone, the attempt by Icarus Interstellar to model environments aboard a long-duration starship that might spend centuries or more getting to its destination.

Image: Sustainability savant Rachel Armstrong, whose work involves ‘living architecture’ that makes it possible for buildings to be constructed with some of the attributes of biological systems. Credit: Icarus Interstellar.

When Richard Obousy reported in these pages last March about developments at Icarus, he noted the challenges posed by a ship like this:

A habitable long duration starship will need evolvable environments that not only use resources efficiently but can respond quickly to the needs of populations and bypass the current necessary time lags that are implicit in the current system – in identifying critical upgrades and then activating industrial supply and procurement chains – which are already playing catch-up by the time they are realized.

Of course, these are problems with direct relevance today where urban infrastructures in the era of the mega-city can quickly become outdated. The challenge in both cases is to come up with environmental solutions that can not only last but grow organically with our needs. That obviously takes us out of the realm of traditional architecture, or at least melds it with new disciplines. And it’s just that cross-disciplinary reach that Armstrong is reaching for through the Black Sky Thinking Prize, which will be awarded to an individual who tackles interstellar issues with the same willingness to supercede conventional ideas that Armstrong values so strongly.

In a just published article, Armstrong explains the kind of innovation the prize will honor:

While traditional modes of innovation rely on individuals to develop novel objects around which markets and customers are built, where the product is ‘pushed’ into use – the Black Sky Thinking Prize seeks a different kind of innovation, which is inspired by a pioneering vision that invites others to help its realisation. The Black Sky Thinking Prize therefore encourages ‘pull’, as well as ‘push’ innovation, to unite and motivate communities of interstellar researchers and explorers, to realise a shared goal. This approach to generating novelty is not only crucial for our exploration of the worlds beyond our own but may also help navigate the substantial challenges that we face here on earth, where established frameworks persuade us to constrain our thinking within the limits of incremental innovation which benefits a few, rather than the many.

The plan is for the Black Sky Thinking Prize to be awarded biennially at the Starship Congress organized by Icarus Interstellar, an event that debuts next week in Dallas. The competition begins in 2014 with a judging panel that Armstrong describes as “international experts, visionaries and mouldbreakers” now in the process of being appointed. Winners will present their ideas at the Starship Congress as well as receiving a monetary grant. More on this as it develops, but it’s worth noting here that the prize will favor conceptual breakthroughs that could influence the evolution of interstellar studies over near-term technologies. 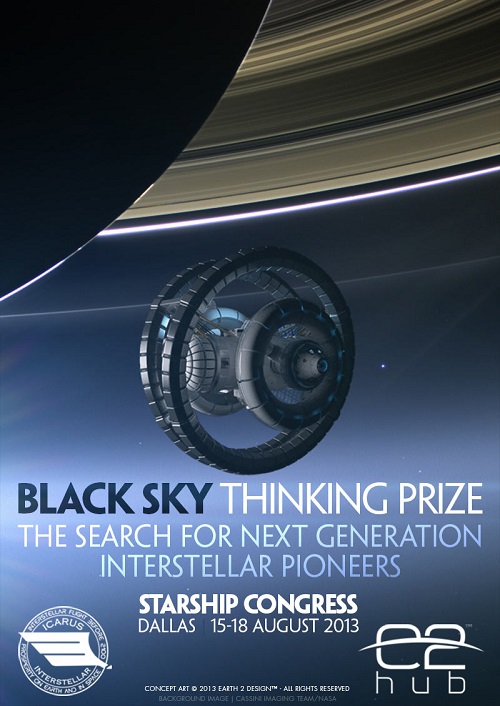 Encouraging futurists with grants and an audience keeps new ideas in the mix, always a welcome development considering how hard it is for people to move past their preconceptions. It’s tricky for any worldview to imagine its successors,but people like Intel’s Brian David Johnson put a great deal of time into the effort. I think of Johnson with regard to the Black Sky Thinking Prize because the writer/engineer is tasked by Intel with looking about ten years out to imagine the kind of future the devices that are in the concept stage today will emerge into as products.

As Icarus Interstellar is doing with Black Sky, Intel has been encouraging such thinking for several years through its own Tomorrow Project, which involves working scientists as well as science fiction writers and a cross-disciplinary audience that participates in conversations about these matters worldwide. A current hot topic is how cloud computing, driven by chips that will soon shrink to sizes small enough to be installed on everything from clothing to kitchenware, will aggregate information to provide services whose shape we have yet to define.

The Tomorrow Project’s The Future – Powered by Fiction competition solicits science fiction, essays, comics and videos from people of ages 13-25 all over the world, with ten winners to receive cash prizes and have their work published online. Winners will be announced by the end of this year. As with Armstrong’s Black Sky Thinking Prize, Johnson’s goal is to develop humanized visions of a future that uses intelligent technology to produce sustainable lifestyles. I’m all for prizes like these that set a high bar and encourage broad participation, for the solutions to intractable issues can emerge disruptively and from unexpected quarters.