A paper just published online by the journal Astrobiology examines what a Europa lander could accomplish on the surface. It’s part of the process of future mission building even if that future is deeply uncertain — we’re a long way from a Europa lander, and funding even a far less demanding flyby mission is problematic in the current environment. But Robert Pappalardo, lead author of the study at JPL, explains the rationale for a close-up study of the icy world:

“If one day humans send a robotic lander to the surface of Europa, we need to know what to look for and what tools it should carry. There is still a lot of preparation that is needed before we could land on Europa, but studies like these will help us focus on the technologies required to get us there, and on the data needed to help us scout out possible landing locations. Europa is the most likely place in our solar system beyond Earth to have life today, and a landed mission would be the best way to search for signs of life.”

The image below, which offers a pole-to-pole view of Europa by overlaying higher resolution mosaics over a lower resolution global view obtained during Galileo flybys, shows the vivid linear features (lineae) whose color has been enhanced to highlight the red markings associated with many of them. Some of these features may well have biomarkers near them that have reached the surface from the global ocean beneath. Modeling their formation presents the possibility of fracturing caused by processes in the ice shell itself, with some models suggestive of liquids pushing through the fractures to form the numerous ridges we see on the surface. It’s precisely here that we could find exchanges of material between the surface, the icy shell and the ocean. 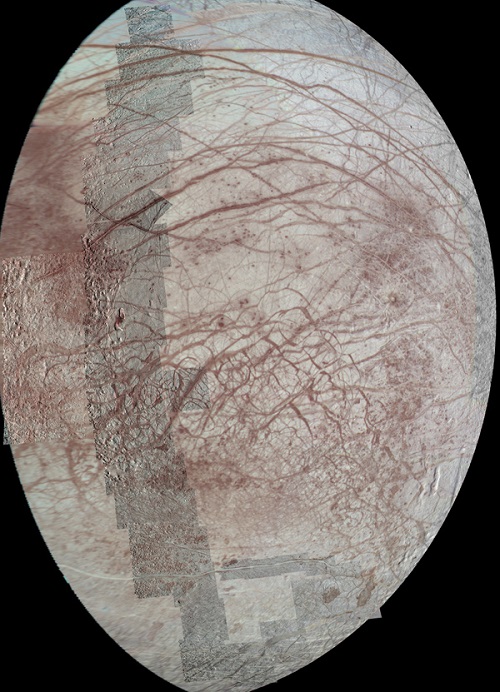 Image: The terrain in this view stretches from the side of Europa that always trails in its orbit at left (west), to the side that faces away from Jupiter at right (east). In addition to the lineae, the regional-scale images contain many interesting features, including lenticulae (small spots), chaos terrain, maculae (large spots), and the unusual bright band known as Agenor Linea in the south. The mosaic was constructed from individual images obtained by the Solid State Imaging (SSI) system on NASA’s Galileo spacecraft during six flybys of Europa between 1996 and 1999. Credit: NASA/JPL-Caltech/University of Arizona.

Radiation is obviously a factor near Europa, one that will have a huge impact on hardening a lander for survival but also on choosing the most likely landing site. The paper points out that many of the darkest features on the moon also seem to be the youngest and are therefore likely to be less processed by radiation. The team, whose members were drawn from a number of NASA centers and universities, made lower radiation regions a priority for choosing sites where a lander would operate.

Europa’s so-called ‘chaos’ regions — marked by jumbles of ridges, plains and cracks — are the most likely targets because of their apparently young age and their associated dark plains that may consist of frozen fluid from the ocean. The image of suggested landing sites below is drawn from the paper, with associated caption.

Image: Candidate landing sites on Europa. Top: Blue contours show radiation intensity on Europa’s surface, as labeled with the geographic extent to which electrons of a given energy affect the surface and how deeply they penetrate (excluding the effects of secondary particles)… Candidate landing sites are indicated by red circles on the global map and shown in regional scale images at bottom. Left: Dark plains associated with chaos in the Galileo E25 region. Center: The chaos terrains Thera and Thrace Maculae. Right: Dark chaotic terrain in the Galileo E17 regional mosaic. Each candidate site satisfies the criteria of low-albedo, youthful material that appears to have originated from the subsurface and is outside the most intense radiation regions on the satellite. Credit: Pappalardo et al. (full citation below).

Two candidates stand out: “Thera and Thrace Maculae present very attractive targets for exploration on the basis of their low albedo, relatively young age (they have disrupted the preexisting terrain), and likely endogenic origin. It has been suggested that water may exist beneath Thera Macula today.” The problem is that we don’t have a view of Europa’s surface detailed enough to make many further inferences without more data from reconnaissance missions. This is going to be one tough place to touch down on safely, as the paper makes clear:

The highest-resolution images of Europa’s surface currently available are the handful acquired by the Galileo spacecraft with resolutions that range from 6 to 12 m/pixel. These show a surface that is rough down to the pixel level, containing fractures, slopes, and scarps. Most daunting are plates and matrix material resulting from chaos formation…, although these are scientifically very attractive places to explore. Imaging with resolution of 4 m/pixel of very young and active terrain on Saturn’s satellite Enceladus—in a portion of Enceladus that resembles Europa’s surface at comparable (tens of meters) resolution—reveals a landscape with many large ice boulders down to the resolution limit.

All of which puts the focus on existing mission candidates like Europa Clipper. Planetary geologist Philip Horzempa provided a recent update on this concept, which could launch as early as 2021 depending on ever-present budgeting fluctuations. Europa Clipper would not be a lander but a Jupiter orbiter that, over the course of two and a half years, would perform 32 flybys of Europa, the closest as low as 25 kilometers. According to Horzempa, the mission is seen as a precursor to a future lander, with a reconnaissance camera included as part of the package to provide lander-scale characterization of the surface with resolutions down to 0.5 meters. 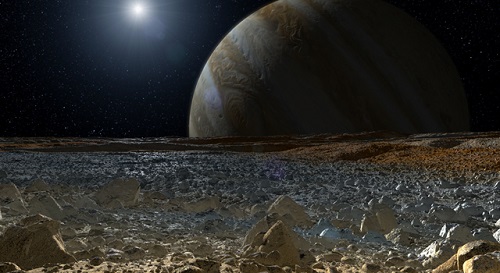 Image: This artist’s concept shows a simulated view from the surface of Jupiter’s moon Europa. Europa’s potentially rough, icy surface, tinged with reddish areas that scientists hope to learn more about, can be seen in the foreground. The giant planet Jupiter looms over the horizon. Image credit: NASA/JPL-Caltech.

A future team of Europa lander specialists would study a selection of perhaps fifteen potential landing sites to down-select to a primary and a backup. Read Horzempa’s essay for more on the instruments being designed for the mission, which will have to survive intense radiation exposure through the use of 150 kilograms of dedicated radiation shielding. The Clipper team is weighing numerous options including mini-probes (nanosats) that might orbit or even make a hard landing on Europa. As we wait to see what plays out on the funding front (and remember the ongoing cost of the James Webb Space Telescope), work on the Europa Clipper design continues even as we ponder the most effective sites for safe operations and science on the surface.