As we approach Starship Congress in Dallas, the Institute for Interstellar Studies has announced the creation of the Alpha Centauri Prize Awards, the first of which will be the ‘Progenitor Award,’ to be bestowed at this year’s Starship Congress on August 18. The winner will receive a certificate and $500 cash award donated by Icarus Interstellar, the organization behind the Dallas meetings. The winner is to be chosen from among those presenting at the Starship Congress. 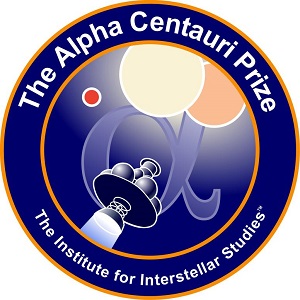 The Dallas gathering that convenes this Thursday will be the third major interstellar conference so far this year, following conclaves in Huntsville (Tennessee Valley Interstellar Workshop), San Diego (Starship Century) and preceding September’s 100 Year Starship Symposium. In addition, a conference on The Philosophy of the Starship was held by I4IS in London in May. In that suddenly quickened climate for interstellar studies the judges for the Alpha Centauri Prize Progenitor Award are being asked to make their selections based on originality, direct relevance to interstellar flight, and the potential of the work to be viable both technologically and economically in this century.

Addendum: Kelvin Long writes to tell me that another Starship Century conference will take place in London this October, along with a conference on Project Icarus. More on these when I have further information.

The Progenitor Award is the first of what is to become a series of awards in deep space design. Subsequent awards are, according to an email from I4IS executive director Kelvin Long, to be launched over the next two years. The intent is to provide incentives for design work of relevance to interstellar flight. A recent post on the Institute for Interstellar Studies website offers this:

We will set technical standards for physicists, engineers, biologists and scientists to reach for, harnessing the skills of old, and building the skills of new. We will foster and encourage pathways to new design concepts which solve old problems, and generate insights into new ones…

As explained in the I4IS post, the larger motivation is to adopt the lessons learned in the Ansari X-Prize competition to spur innovation and create technical developments in interstellar research. Here the future competitions become ambitious indeed, encompassing design studies by international teams of 6-10 designers, with each team submitting a final report to a judging panel after a development time of one year, and recurrent competitions taking place every two to three years. The plan is to drive design work in a host of projected technologies:

The Alpha Centauri Prize would be an international competition that has the function of incentivizing research, contributing technical knowledge, developing designer capability whilst inspiring the public towards the vision of interstellar flight. It is one of the best ways to advance the prospects for interstellar travel, and to have separate design studies, which could be derived, iterated and improved. Over time, the concept would be worked upon by future generations and ultimately lead to a direct design blue print for an interstellar probe after several decades of running. Like the BIS/Icarus Interstellar Project Icarus and the soon to be announced I4IS Project Dragonfly, it is the hope that other teams around the world would be assembled to work on specific proposals investigated historically such as NERVA, Starwisp, Vista, Longshot, AIMStar, Orion or one of the many others.

Long and Icarus Interstellar’s Richard Obousy created Project Icarus in 2009 as both a continuation and redefinition of the 1970s era Project Daedalus. The competition foreseen in the Alpha Centauri Prize, unlike Icarus, does not focus on a single propulsion system but considers all options from solar sails to antimatter, eschewing redesigns of historical work to create what the site describes as ‘new and innovative design concepts.’ I4IS envisions competitions taking place every two to three years to increase the technological readiness of different propulsion schemes, with eventual cash prizes in the $10,000 to $100,000 range:

After running the competition for two decades we may find that what may emerge is not a single choice for going to the stars in the coming centuries, but instead a realization that it is a combination of approaches with highly optimized engineering designs that will be the way to go. This may suggest hybrid propulsion schemes and could for example be along the lines of a fusion-based drive with anti-proton catalyzed reactions but using a nuclear electric engine for supplementary power and perhaps a solar sail and MagSail for solar system escape or upon arrival. From the two decades of research will develop reliable engineering studies, practical progress of the technology and several clear front runner designs to focus initially divergent research options towards the proper investment into the clear front runner designs by a process of gradual down select.

Competitions have proven their worth in aviation and aerospace (think Lindbergh and Burt Rutan), but in those cases we were dealing with existing or near-term technology and building hardware. What I4IS intends with the Alpha Centauri Prize is to turn the same principles to work at design studies that will surely out-run present-day engineering. It’s an idea that worked with the volunteer teams that have designed Daedalus and are now designing Project Icarus. With government funding all but non-existent on most of these concepts, it’s heartening to think that philanthropic alternatives can be found to push studies across the spectrum of propulsion options. A torrent of research papers would be a welcome outcome of such competitions.