As we saw last week, touching down on Europa is going to be a tricky maneuver, at least based on the surface mapping we have so far, where boulders show up all the way down to the limits of resolution. That’s why we need better imagery from the moon, a major motivation for the proposed Europa Clipper. Titan poses far fewer problems. Its thick atmosphere allowed the Huygens probe to land softly after a long, slow descent by parachute. Proposals for Titan missions have included boats to explore its lakes (Titan Mare Explorer) and airborne laboratories to soar through its skies (AVIATR: Aerial Vehicle for In-situ and Airborne Titan Reconnaissance).

The SETI Institute, working with NASA, has been testing the lake option at Laguna Negra, a lake in the Chilean Andes, in a project called Planetary Lake Lander (PLL). The idea is to develop the kind of autonomous hardware we’ll need to explore Titan from the surface. But PLL is a dual-purpose mission that also studies the watershed of Chile’s Echaurren Glacier, a freshwater source for millions that is rapidly disappearing. The expertise the researchers bring to the lake thus becomes useful not only in modeling a highly changeable environment on Titan but also in providing real-time data on the impact of deglaciation on terrestrial lake habitats and biology. 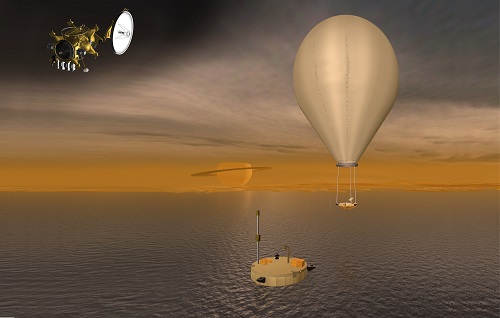 The prototype robot has been operational since 2011, charting the lake’s depth and making a variety of scientific measurements. A report from Laguna Negra by one of the team members last December describes testing the PLL on a three-kilometer sail across the lake in a journey that took eight hours, with data from the lander being sent to NASA Ames as it would be on a real mission, though via orbiting communications satellites rather than the Deep Space Network. A real mission would also cope with bandwidth restrictions not being mimicked in this work.

This National Geographic article notes that the current PLL unit is too heavy to ever make it into space, but astrobiologist Nathalie Cabrol, who leads the lander’s science team, likens the work to where the Mars rover teams were ten to fifteen years ago, when their prototypes were undergoing tests in the desert. PLL has been at Laguna Negra conducting unsupervised operations through the Chilean winter, but the researchers plan to return to work on the robot’s sensors and problem-solving capabilities, crucial in an environment where communications times run in hours in both directions. Autonomous operations are obviously an essential. “We’re not only building a robot, but a new generation of robots,” says Cabrol. “The new generation will not just be sitting around waiting for us to tell them what to do.”

A Titan lake lander would float across the surface of a large Titan lake like Kraken Mare or Ligeia Mare, measuring winds, waves and changes in the weather. Because it is the only other body in the Solar System known to have stable liquid on its surface, Titan’s lake explorations can be readily modeled on Earth. And in terms of getting down safely, it compares well with Mars, as the PLL team noted in a post last year:

The Earth’s surface is shaped by plate tectonics, so we have distinctive low ocean basins and higher terrain on the continents. Mars and Titan are single plate planets, and so have a more uniform distribution of topography. However, Mars, more like Earth, has had a lot of volcanic and tectonic activity, that has formed the tallest volcano in the solar system (Olympus Mons) as well as very deep and large canyons (Valles Marineris). Titan has a lot of erosion from its methane rainfall and little tectonic and volcanic activity, and so has very low topography. Topography is challenge of you are trying to land a rover, so the Curiosity rover had a radar to make sure the landing site was safe. That is certainly an advantage of landing on a lake on Titan- a very flat and safe surface!

From an astrobiological perspective, a Titan lake lander could tell us much about the complex chemistry on the moon. PLL lead engineer Trey Smith, discussing Titan’s hydrocarbon atmosphere and lakes, adds that interesting organic chemistry is probably happening on the surface: “No living thing we know of on Earth could survive on Titan,” he said, “but that doesn’t mean there isn’t some other exotic form of life there.” Life’s chances at -180 Celsius may be hard to calculate, but that’s one good reason to get an instrument package back to Titan, whether airborne or afloat. Whichever option we use, the views should be spectacular.