The Sail Comes to Texas

Low clouds had descended upon Dallas when I landed at Love Field, and by the time I got to the Hilton Anatole for the Starship Congress being hosted by Icarus Interstellar, the city outside was swathed in mist. This was last Wednesday evening, and it was late enough by the time I had dinner that a quick stroll through the cavernous facility was about all I wanted to do before getting some sleep. The Anatole, though, was gorgeous, filled with paintings and sculpture, some of which (two statues of elephants) became helpful landmarks as I learned to navigate the place. 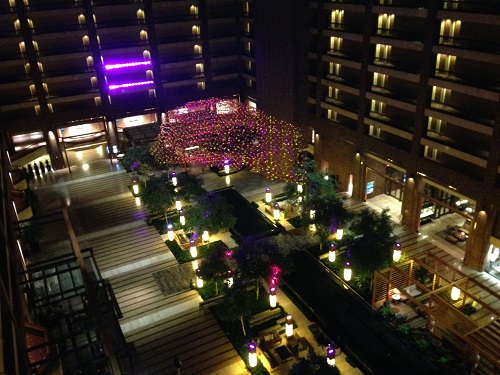 Image: An atrium at the Hotel Anatole at night, one of two, connected so that inveterate walkers like myself could make figure-eight circuits by following the room corridors on any floor.

Starship Congress was a roaring success, the kind of thing that happens when you put people with passionate interests in the same place who usually know each other only through email or by reputation. Saving the day for me on day one was my friend Pat Galea, an Icarus Interstellar fixture, who had brought one of those little MiFi ‘hotspots’ with him. For we learned that the hotel wireless didn’t extend into the meeting room, but Pat, who is to computer issues what Itzhak Perlman is to violins, soon had four of us up and running with a slow but adequate connection. That allowed me to send out the occasional tweet and check various things on Google. 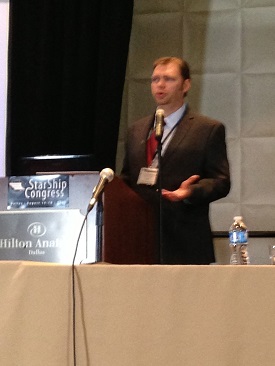 I was glad that the Icarus Interstellar Kickstarter campaign had gone as well as it had, raising a good deal more than the initial goal, and thus funding the travel costs of a number of speakers. We’re all learning our way with crowdsourcing tools like Kickstarter, but they offer a level of public engagement that Richard Obousy, Icarus Interstellar’s president, acknowledged in his opening remarks. In the post-Apollo era, everyone is aware of the need to find ways to engage the public in the great issues of space exploration, and having a stake in an interstellar conference, even if the contributor can’t make the trip, is one way to get this done.

My conviction is that the first serious mission targeting another star will use sail technologies in one form or another. The first conference session was devoted to sails, leading off with Jim Benford’s keynote, followed by Les Johnson, who described current and near-term work. Right now the only propulsion method that will get us to interstellar velocities is the sail, and even then we’re talking no more than a couple of hundred kilometers per second, so it’s still a long trip. The Alpha Centauri crossing at 300 kilometers per second (perhaps realizable through a close pass by the Sun with deployment of the sail at perihelion) would still take 4300 years.

This is always a bit of a mind-bender because Voyager 1, the fastest probe we have leaving the system right now, moves at a ‘mere’ 17 kilometers per second, and while New Horizons topped that briefly in the early part of its journey, it will ultimately pass Pluto/Charon at about 13.9 kilometers per second. We need to find ways to ramp these numbers up, and that search begins in the lab. What Benford described in the opening session was a series of experiments he and his brother Greg made on beamed propulsion back in the year 2000. The researchers were working with a carbon fiber mat shaped into a small sail with a thickness of less than 1 millimeter.

Carbon fiber is ideal for sail work because when you put a microwave beam on the sail the material absorbs energy and begins to heat. A sail made of aluminum would begin to melt as you reach about 900 K, limiting possible accelerations, but carbon fiber has a low areal density (about 8 grams per square meter in the material the Benfords used) and a microwave reflectivity approaching 90 percent. The material is actually a carbon-carbon microtruss, meaning a core of carbon fibers is fused to a textured outer surface. With carbon nanotubes woven into the material, this microtruss is capable of temperatures up to 3000 K, at which point it doesn’t melt but sublimes, going from solid to gas with no intervening liquid state.

Working with a sail in an Earth-bound laboratory means you have to achieve an acceleration of one g just to lift off, but the Benfords were able to get up to 10 gs in these experiments, using a wavelength of about 3 centimeters and a pulse duration of 0.2 seconds. Although the tiny experimental sails began to heat up at higher beam powers and bounced off the ceiling of the lab, they survived and remained undamaged after the flight.

All this is provocative because a normal solar sail — think Japan’s IKAROS, for example — is pushed solely by sunlight, the fact being that while photons have no mass they do impart momentum. That’s fine when working in the inner Solar System but the effect of sunlight drops drastically as you move outward, dropping off by the inverse square of the sail’s distance from the Sun. In other words, a sail at Jupiter’s 5 AU from the Sun receives only 4 percent of the sunlight it would in Earth orbit, so an outbound sail is going to need a microwave or laser push if we want to keep it under acceleration all the way to system’s edge and beyond.

The laboratory work that has been done thus far is highly encouraging. Having learned that a sail can indeed be pushed to high accelerations by using a microwave beam, the Benfords were also able to show that a sail of the right shape — concave and something like a parachute — will be stable and stay centered in the beam. In fact, the beam induces a sideways restoring force so that even assuming a certain amount of ‘jitter’ in the beam itself, the sail is capable of riding the beam. We’re a long way from the laboratory to the gigantic sails envisioned by Robert Forward, but we’re getting good indications that once we have the expertise to build the right kind of ‘beamer’ in space, the physics will allow sail missions that can reach interstellar velocities.

Transmitting angular momentum to a sail through a beam of photons has also been demonstrated and is, in Benford’s words, ‘a trivial process,’ so that sail deployment might become a matter of putting a large sail into space and inducing a spin to unfold it. Whatever deployment method might be used, the fact that a beam can carry angular momentum means that controllers can stabilize the sail against yaw and drift once deployed. Keep in mind, too, that a number of sail mission concepts actually call for lower power densities than the Benfords needed in the lab — remember, they were pushing the sail from deep within a gravity well. So the experimental case for beamed sails is solid and we can look forward to space-based testing. 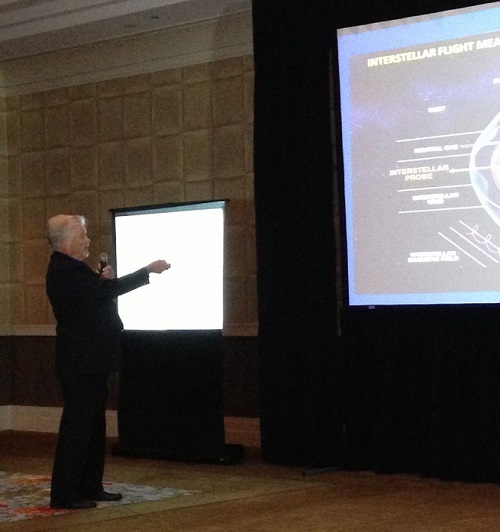 Image: Jim Benford discusses the experiments he and his brother performed on sail beaming at the Jet Propulsion Laboratory.

Half a million dollars produced the results Benford described, making the point that while we do have these initial results, we lack a large body of data to draw from not just with sails but most other interstellar propulsion proposals as well. “We have far too many concepts and far too little data,” Benford reminded the audience, adding that “Nature will produce the answers if we ask the correct questions.” Indeed. And these experiments tell us that useful work this early in the interstellar process can grow out of laboratory studies that aren’t hugely expensive. The interstellar community should be thinking about how it can support such ground-breaking work not only on sails but other proposed solutions to the interstellar propulsion conundrum.

One of the exciting thing about interstellar studies is the sheer number of questions it raises. With sails we are dealing with a subject that has moved out of the conceptual phase. We know the physics and are beginning to demonstrate sail methods here on Earth. We can now move in two directions, the first being to work on new materials that will be lighter and more responsive to the beam on the sail. The second step, an obvious one, is to continue with actual space deployments of sails and begin to do beaming experiments on them. More tomorrow as I look at other sail presentations from Starship Congress, beginning with Les Johnson’s overview on what we’ve accomplished so far in space and what we can expect in the next few years.