Sailcraft: Uses of the Beam

I’m always on the lookout for practical ways to use solar sails. We think long-term here and interstellar flight is the topic, but the other side of that coin is that we need to see incremental progress made that builds toward a significant human presence in space. Creating the installations to send powerful microwave or laser beams to interstellar sailships will involve mastering all kinds of needed objectives starting with getting large payloads to low-Earth orbit cheaply and building plentiful expertise in moving supplies at interplanetary distances. 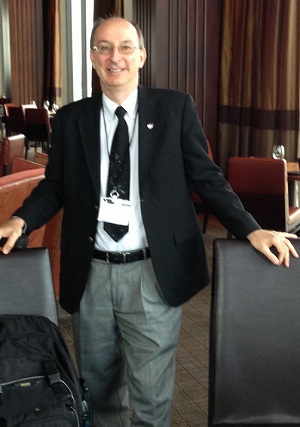 Sails can go to work for us here, and before we get to that level, we can chart a path of development with clear, practical uses that companies and governments can support. Yesterday I mentioned Les Johnson’s talk at Starship Congress in Dallas, in which he described ongoing sail efforts and noted that NASA’s Sunjammer sail was partly sponsored by the National Oceanic and Atmospheric Administration. Early warning for solar storms is a practical outcome and one space agencies should be able to use to gain funding. Meanwhile, we can watch private attempts like the Planetary Society’s Lightsail-1 and hope they can find their way to a launch manifest, which would continue to validate the model of commercial engagement.

Image: I knew I had at least one good shot of Les Johnson from the conference, but I couldn’t find it yesterday. A quick search of my iPhone pulled it out. The shot above was snapped at the Hilton Anatole’s top-floor restaurant the evening of the first day in Dallas.

One other kind of mission that Johnson mentioned, a sail rendezvous with a near-Earth asteroid, is certainly viable. There are various ways to operate around asteroids, but the sail offers you the option of visiting multiple objects, performing studies as needed and moving to the next target. Targeted missions by chemical or even ion rockets don’t have an open-ended target list, but the sail can rely on ever-present solar photons to keep it operational, giving us deeper insights into objects we have now begun to catalogue extensively for science and for planetary safety.

The Beam and the Near Miss

When it comes to putting a beam on a sailcraft to keep it operational even at distances greater than 5 AU — or to provide a huge velocity boost for closer-in missions between the Earth and Mars — we also need to be thinking about practicality. A Mars colony or an aggregation of asteroid miners in need of supplies could use the services of beamed sailships. Greg and Jim Benford have studied the effects of desorption of polymer layers on a sail, an effect caused by heating the sail with the beam that provides accelerations greater than those achieved by photons alone. Mars travel times of about a month can result from proper use of the beam.

We can imagine a network of sail-based supply ships as we spread out into the Solar System, an era in which we master solar sails and their beamed sailship counterparts while doing necessary work. Also intriguing at Starship Congress was another angle on the practicality of beaming, this one from Philip Lubin who, with co-researcher Gary Hughes, has been studying ways of dealing with asteroids on problematic trajectories. Lubin (UC-Santa Barbara) described what we might consider a directed energy orbital defense system using lasers fed by solar energy. It could be a major addition to our toolkit of asteroid deflection options.

Ironically enough, as Lubin told the crowd in Dallas, the white paper describing his DE-STAR system was released the day before the spectacular fireball over Chelyabinsk and the near-miss from asteroid 2012 DA14 reminded the world that asteroids can be dangerous. Lubin pointed out that 35,000 impacts from various objects have occurred in the last 4000 years, with about 100 tons of material entering the atmosphere on a typical day. Most of this is obviously not causing carnage, but we’re charting the orbits of large objects to make sure nothing threatens the planet with an extinction level event. We’d obviously like to get to where we could rule out Tunguska-class impacts as well, which are large enough to take out an entire city.

DE-STAR (Directed Energy Solar Targeting of Asteroids and exploRation) is a way to deal with such impactors. It would use a massive phased array of lasers to break up or evaporate the objects. The Santa Barbara team has calculated the requirements for a range of DE-STAR systems beginning with a desktop device and extending to 10-kilometer arrays and beyond. Their DE-STAR 2 is envisioned as a 100-meter system that could nudge asteroids or comets enough to avoid an impact.

But a 10-kilometer DE-STAR 4 could punch an asteroid with 1.4 megatons of energy per day, obliterating a 500-meter asteroid over the course of a year. Lubin described how space photovoltaics could be applied to create a beam of coherent focused light that would produce a spot size of about 30 meters at a distance of 1 astronomical unit. The beam would be applied to the asteroid when it was still distant, perhaps 1 AU out. And while totally evaporating an incoming object is feasible, it’s hardly necessary. The goal is simply to deflect it. 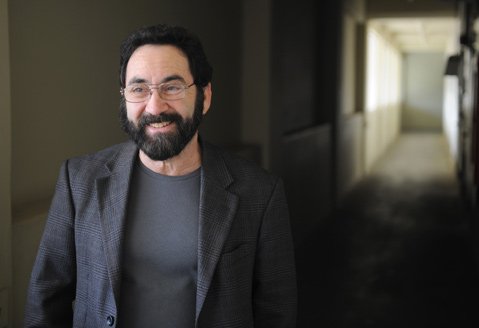 A phased array of lasers powered by the Sun scales up nicely in Lubin’s calculations from basic components that already exist to larger space-based installations with which we’ll have to develop expertise. Here again, though, there is a path of development and a clear rationale, planetary defense. And I’m sure you can see where I’m going with this: DE-STAR can produce the beam needed to drive a sailcraft to interstellar velocities. Lubin told the Dallas audience that a much larger DE-STAR 6 system could bring a 100 kilogram sailcraft up to 1200 kilometers per second over a range of 1 AU, while pushing it to 2 percent of the speed of light by the time it reached the edge of the Solar System.

Interestingly enough, there are a few SETI ramifications here as well. A DE-STAR 4 system is so powerful that when directed at another star it would be visible as the brightest star in the sky up to 1000 light years away. Those who think in terms of sending messages to extraterrestrial civilizations — and the subject of METI, always controversial, came up in Dallas, about which more later — could modulate a laser. Lubin’s is one way of creating the kind of interstellar beacon many of us think should not be built until we can reach a rational consensus about what the aims of such messages would be and what the possible risks of sending might involve.

The Triumph of the Small

I don’t want to close today without mentioning nanotechnology in sail terms, because as Eric Malroy made clear to the Starship Congress audience, mass is a critical concern as we move toward making larger sail structures. We want to push these things up to interstellar speeds, but the stronger the beam we put on the sail, the higher its temperature. So we’re looking for the right kind of materials to withstand the heat even while reaching incredibly low areal densities, at which point acceleration, in Malroy’s terms, ‘goes through the roof.’

A lot of work has already gone into sail materials, much of it by Geoffrey Landis (NASA GRC), who took Robert Forward’s aluminum sail structures and re-examined them. Niobium, beryllium and transparent films of dielectric (non-conducting) materials like silicon carbide, zirconia and diamond all fell under his attention as he searched for ways to bring sailships to higher accelerations while using smaller sails. Beryllium was an early front-runner but Landis went on to talk about sails made out of diamond-like carbon — a material much like diamond — that could be assembled in space with a plastic substrate. The beauty of this is that you can reach cruise velocity while still close to the laser source, thus using smaller sails and smaller lasers.

Malroy (NASA JSC) noted the possibility of using nanotechnology to print computing and sensor devices directly onto the sail, significantly reducing mass. The idea reminded me of Forward’s Starwisp, a microwave-driven sail that contained sensors at the various junctions of the spider web-like structure, so that instead of pulling a payload along behind, the sail and the payload were the same structure. Lenses and nano-transmitters could return imagery from distant solar systems using these techniques, and Malroy also described swarms of miniature beamed sails of the kind first described by Jordin Kare. In any event, he believes that by properly deploying nanotechnologies, we can reduce interstellar sail mass by 70 percent. 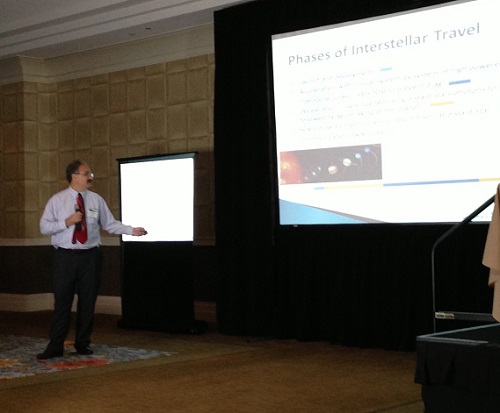 If these concepts intrigue you, you can read more about Starwisp in Remembering Starwisp, though the archives contain a number of other Centauri Dreams posts that get into the concept. Jordin Kare’s ‘SailBeam’ micro-sails are described in Interstellar Propulsion Exotica. But we won’t get to the beamers needed to drive such spacecraft until we can show a sustainable path of development that begins with practical applications today. That’s why the idea of experimenting with phased arrays for asteroid mitigation appeals to me. It’s laboratory work we can perform now with implications that could take us out of the Solar System.

Tomorrow I’ll be looking at an intriguing concept for building an interstellar infrastructure that was presented at Starship Congress. For now, though, let me mention that the paper on sail desorption mentioned above is Gregory Benford and James Benford, “Power-Beaming Concepts for Future Deep Space Exploration,” in the Journal of the British Interplanetary Society Vol. 59 No. 3/4 (March/April 2006), pp. 104-107. Jim Benford didn’t get into the desorption issue in his Dallas talk, but it’s provocative and gives sails an added kick. 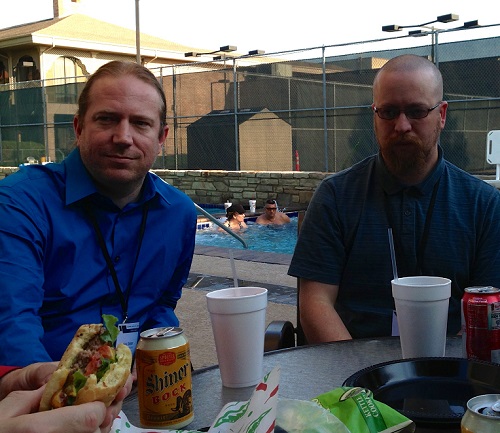 And to close, this final photo, showing my son Miles and science fiction writer Oz Monroe, who flew in from the West Coast for Starship Congress. We had a great dinner sitting around the Hilton Anatole’s pool with Sonny White along with Rob Adams (NASA MSFC) and his wife Tia. The cheeseburger you see here is Sonny’s.