A Light Bridge to Nearby Stars

Charles Quarra tells me that like many kids who grow up dreaming about the stars, he realized early on that a career in physics would make sense. A book-filled childhood helped fix this focus, especially Carl Sagan’s The Cosmic Connection and Peter Nicholls’ The Science in Science Fiction. Charles went on to get a Physics B.Sc degree from Universidad Simón Bolivar in Caracas in 2006, but adds “pursuing it as a career turned out to be less satisfying as time went on. I’ve also been programming most of my life, so a transition to a software development career felt almost too natural for me, which I’ve been doing since moving to Panamá in early 2008.” His interest in space propulsion and exploration, though, remains strong, as evidenced by the paper he presented at Starship Congress in Dallas, which looks at building a chain of stable equidistant laser relays to provide beamed power for interstellar spacecraft. In the post below, Charles summarizes what he has in mind. 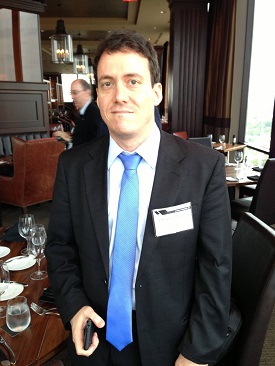 For decades since the beginning of the space age, mankind’s technological capabilities have grown exponentially in almost all but a few fronts of knowledge. One of the areas where evolution has been particularly frustrating is the result of the abysmal separation between our increasing capability to observe and find new potential places to visit, while our collective will to explore deeper and longer has stayed almost the same, if not languished at times. We seem to be the kids in front of the candy store of the universe, condemned to remain there for what seems like an eternity, while the object of our curiosity stays perpetually out of reach.

The ‘starway’ concept I present here is a natural evolution of the work of both Robert Forward and Geoffrey Landis in extending the reach of beamed power into deep interstellar space, by taming the beam divergence that is ever present in all laser wavefronts. Beamed power gives us the possibility of leaving the source of energy at home, avoiding the exponential blowout of energy requirements imposed by the Tsiolkovsky rocket equation. But beamed propulsion is far from devoid of issues: The pointing accuracy, the huge laser sources and sails tens or hundreds of kilometers wide demand engineering capabilities that are still far from our current horizon.

Handing Off Power to Starships

Conceptually, the starway tries to push the idea of multiple lenses for beam refocusing, analyzed by Landis in the 1990s, in the direction of making them reusable: Can we take a string of lenses, deploy them between two stars and keep them operational for long periods?

If so, the potential gains would be enormous: One of the problems that makes interstellar flight so hard is not only the extraordinary distances but also the almost entire absence of useful power required for propulsion. So a string of stabilized lenses in deep space would be able to deliver the required high energy density. 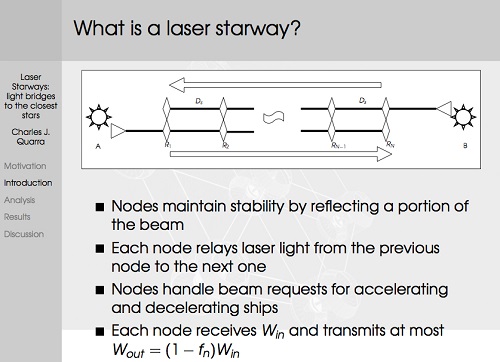 The conceptual step of stabilizing the lenses involves upgrading the elements to more than simple optical elements. We need slightly more complex relay devices capable of tasks that go beyond the simple optical refocusing of the beam: Reflection, beam splitting, heat rejection and telemetric coordination, to name a few other engineering requirements that the optical relays need to be able to do (sometimes simultaneously) in order to guarantee the continuity of power delivery along the structure, and toward nearby sails in transit. As it turns out, the principal parameter that determines the available power for sail propulsion on the light bridge structure is the optical efficiency of the relays: As the optical efficiency of the relays stays below the critical value (which for a starway made of thousands of nodes will imply losses per node around 100 ppm) the efficiency of the laser thrust utilization grows rapidly.

In order for sails to be able to take full advantage of the available power for maintaining constant acceleration without affecting their thermal envelopes significantly, material developments are needed: To handle the Doppler shifting of the beam relative to the sail rest frame, the sails either need to have reflectances with broad spectral peaks or they need to be made of tunable dielectric films that can electrically shift the peak. Dynamically adjusting the wavelength of the laser instead would not necessarily be a good strategy, since that would only translate the spectral efficiency problem from the sails to the optical relays, where efficiency is even more paramount in order to stabilize the starway.

But does it make sense to deploy such structure? One of the vexing aspects in the starway architecture is the substantial requirement of deploying a laser system and solar collector array at the destination system. At first, the proposition seems ridiculous: If the capability is available to do it, why bother sending such substantial cargo instead of your actual intended payload?

The question can be answered only by specifying what we expect from interstellar flight. Do we want one-off missions, demanding huge investments with limited overlap and resource sharing? Or do we want to build a long-term infrastructure that, once deployed, consistently reduces the complexity and cost of subsequent interstellar flights? Interestingly, this is not the first time we had to deal with this same exact dilemma: Roman engineers perfected the technology to build large bridges over rivers that divided Roman territories and provinces. This technology was key to keeping the Roman Empire connected across most of Europe for several hundred years. Building bridges was undoubtedly a daunting task relatively compared to the effort required to cross the river in floating boats, but once they were deployed, the long-term benefits in reduced travel time and risk vastly exceeded any potential building costs.

Radial velocities will mean that certain stars are better suited for a starway than others. For instance, Gliese 581, at 20 light years, moves at a relatively slight pace of 10 kilometers per second. If we had 20,000 nodes (each at a 70 AU separation), we would have to add a new optical node in the starway every 30 years or so. For the same reason, Barnard’s Star (which is much closer, but has a velocity a lot higher than galactic escape velocity) would not be a good candidate for a starway, demanding several new nodes a year being pushed into the line. 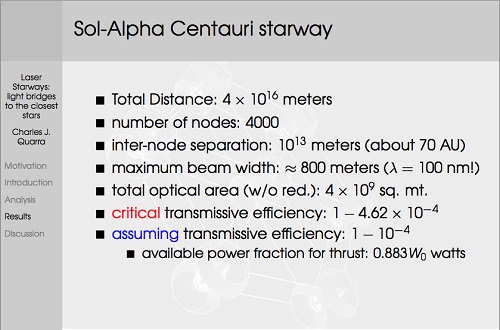 As promising as the concept sounds, there are a number of issues that need to be solved before we can start building them. First, we need to figure out exactly what it would take to deploy such a structure. A starting point for deployment analysis is the multiple-lensed beamed sail mission proposed by Geoffrey Landis, and the fact that this analysis exists goes a long way to proving that deployment is far from being impossible. Depending on the masses of the hundreds or thousands of relays, deployment might take somewhere between several decades to a few hundred years. But the grunt work of relay design is still ahead, and graphene has an enormous potential for reducing the relay mass, at least for the thermal management sections.

But assuming these technical problems can be addressed, an advanced civilization could spread by deploying starways between neighbouring stars. A interstellar network of this kind would not only enable interstellar transport, but would also make high-bandwidth communications much more feasible. Might such a communications network be detectable?

On the problem of SETI by detecting the signature of remote starways in our galactic backyard, I’ve been fortunate enough to have had interesting exchanges with Adam Crowl, an interstellar expert who requires no further introduction to the Centauri Dreams readership, on the possibilities of detecting starways from remote distances. Unfortunately, typical relay nodes are expected to be far too small (a few kilometers at most, if relying on lasers on optically visible wavelengths) to be detected with our current observational resolution. Starways connected to our solar system would require a array laser and probably some extensive solar energy capturing infrastructure that we should probably have already detected if it was present at all.

But beyond a starway’s transportation capabilities, the architecture can easily be extended to relay information in bi-directional interstellar channels. This could provide a partial but nonetheless interesting explanation why purposeful ETI interstellar communications in radio bands seem to be largely absent: Communications are being exchanged by the equivalent of private end-to-end starway networks, largely out of the prying eyes of naive observers like us

Interestingly, the refocusing element design of a starway will profit from certain key developments in adaptive optics and optical mirror mass reduction that are highly sought by the astronomical community. In this regard, the unscheduled talk of Joseph Ritter from the University of Hawaii at Maui at Starship Congress was particularly enlightening, showing interesting possibilities for extending optical resolutions from the ground to the nano-radian range. Quoting my friend Miles Gilster, wouldn’t it be extraordinarily poetic if the technologies required to make the stars seem closer to us are the same technologies that will allow us to be closer to them?