With the beginning of a new week it’s time to ponder how best to move forward with coverage not only of the recent Starship Congress in Dallas, but the upcoming 100 Year Starship Symposium in Houston. For that matter, I still have material from the Starship Century event in San Diego, a gathering I was unable to attend but which continues to be available online. The Starship Congress videos are also up for those who missed Dallas, and I’m going to assume the Houston conclave will likewise be recorded. Watching online can’t match the interaction and conversation of being there, but getting to hear the presentations is a major plus.

What I’ll be doing as Houston approaches is continuing to reflect on the conferences I’ve attended so far this year while also trying to keep up with ongoing news. In the days since Dallas I have continued to speak with a number of presenters who will be joining us, as Charles Quarra did on Friday, with reports on their own work. Several have also agreed to drop in as regular columnists, so we’ll be tracking ongoing progress in a number of interesting areas as reported by people directly involved. I’m seeing the level of engagement between researchers and the public growing, a fact that speaks well for using the Internet to move the ball forward. Kelvin Long is head of the Institute for Interstellar Studies and one of the founders of Project Icarus, the attempt to redesign the Project Daedalus fusion starship of the 1970s. As befits the latter, he is also editor of the Journal of the British Interplanetary Society, whose role in interstellar studies has always been immense. It was Geoffrey Landis who told me many years back that JBIS (‘J-biz,’ as it is affectionately known) had been the home of advanced concept thinking for decades, and as a BIS member myself, I can tell you that seeing that familiar cover appear in my mailbox renews my energy levels for tackling these issues.

Project Daedalus, of course, was designed largely in London’s pubs, particularly the Mason’s Arms, while Project Icarus takes a different tack, the effort being distributed over the Internet in addition to gatherings at conferences (and yes, the occasional pub still crops up). When Long spoke to Starship Congress, he offered up a history of the field as it grew from the Renaissance musings of Leonardo da Vinci all the way through the first astronauts on the Moon and into the present day. It was a useful session (and I thank Kelvin for the kind words about Centauri Dreams) because it helped to frame where we are today in relation to the DARPA grant of 2011 that drew so much press attention.

The DARPA grant of $500,000 resulted in the 100 Year Starship organization that is putting on the upcoming Houston conference, and in many ways awakened public interest in the idea that a trip to the stars was feasible. Popular science fiction on television and in the movies has for the most part made star travel out to be a simple matter, and it’s my guess that the average home viewer looks at the Enterprise flitting about the galaxy and regards the idea of star travel as something akin to fantasy. Thus to have newspapers and other venues begin to report in on serious work that researchers were performing came as a bit of a surprise to many.

Who knew that so much was going on, even if most of it was not being funded by government agencies? Kelvin and I have had this discussion before, and I’m always glad that he hearkens back to Les Shepherd, the British nuclear physicist who played such a large role not only in the British Interplanetary Society but in organizations like the International Astronautical Federation, which he served twice as president. Also a founder of the International Academy of Astronautics, Shepherd wrote a key paper in 1952 called “Interstellar Flight,” another JBIS contribution that moved the field forward by looking critically at how to move a starship.

Here I think of Giovanni Vulpetti’s words about Shepherd, which he kindly supplied for my obituary of the man that ran early last year:

Dr. Shepherd realized that the matter-antimatter annihilation might have the capability to give a spaceship a high enough speed to reach nearby stars. In other words, the concept of interstellar flight (by/for human beings) may go out from pure fantasy and (slowly) come into Science, simply because the Laws of Physics would, in principle, allow it! This fundamental concept of Astronautics was accepted by investigators in the subsequent three decades, and extended/generalized just before the end of the 2nd millennium.

Long’s talk went through Shepherd’s work and touched on many of the figures that have helped the field grow. On the first night of Starship Congress, Heath Rezabek gathered a number of those who had submitted proposals to DARPA for the 2011 grant, including Joe Ritter’s Starship Alliance and the Tau Zero Foundation. I was asked to supply some closing remarks to that event and gave the audience my view that the DARPA grant had put the earlier interstellar work into context and raised its visibility, firming up the idea that journeys to the stars moved beyond fantasy into the realm of extraordinarily difficult but not impossible mission challenges.

Like Long, I went through many of the names of the great players. After Shepherd, Eugen Sänger came to mind with his work on a so-called ‘photon drive’ in the 1950s. The great Robert Forward more than anyone worked out the physics of antimatter and sail possibilities and studied how powerful laser or microwave beams could drive a starship. George Marx wrote a seminal paper on beamed propulsion, while Clifford Singer studied particle beams to drive the craft. Gregory Matloff and Eugene Mallove examined worldships and sails (Matloff, of course, is still active), while the aforementioned work on Project Daedalus gave us the first true starship design.

The background is indeed rich, and bear in mind that many of these researchers were doing this work in their spare time while holding down demanding positions at labs or universities. The interstellar effort has been driven largely by will and determination. Alan Bond and Anthony Martin of Daedalus fame conceived new ideas for worldships, while in Italy the physicists Giovanni Vulpetti, Claudio Maccone and engineer Giancarlo Genta ignited an Italian solar sail effort that defined the issues and developed mission concepts that are still under investigation. One of these, Maccone’s FOCAL, is an ambitious mission to the Sun’s gravitational focus.

I won’t spend the entire post dwelling on the past, but it’s worth remembering that when Robert Forward was nearing the end of his life, he declared Geoffrey Landis (NASA GRC) to be his successor, and Landis indeed worked through many of the problems in sail materials that so interested Forward. The DARPA grant didn’t happen until 2011, but in the mid-90s we had the Vision-21 conference at NASA Glenn (then Lewis Research Center) followed by the creation of the Breakthrough Propulsion Physics project under Marc Millis. Ed Belbruno ran a conference called Robotic Interstellar Flight: Are We Ready in New York in 1994, this one sponsored by The Planetary Society and with involvement from NASA and JPL. The point is that tough-minded researchers have been tackling these issues since long before the public began to notice. We can hope the new interest will be quickened by future events, the most likely driver being the discovery of a truly Earth-like world around a star close enough for detailed study. 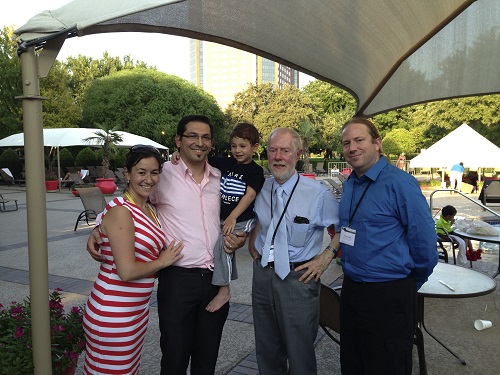 Image: Icarus Interstellar’s Andreas Tziolas, along with wife Zoi Maroudas-Tziolas, son Constantine, myself and, to my left, my son Miles.

Meanwhile, we continue with the interstellar effort while acknowledging that this is a multi-generational quest. The critical scientific and engineering studies are increasingly engaging the strands of science fiction and the popular media as the effort continues. We are discovering interest from sociologists, psychologists, historians, biologists, making the case that this is not a project that can remain purely a matter of physics and engineering. To engage the public we need the humanists as well, for we must ignite the vision in our culture, communicating sound reasons for deep space.

I sometimes turn to the Greek word mythos in describing what is happening. It’s the origin of the word myth, of course, and it has a range of meanings from ‘word’ through ‘fiction.’ The Greeks used ‘logos’ to mean ‘word’ as well, but logos was the word that can be argued and demonstrated, whereas mythos aimed at something ineffable, beyond argument, something that could provide guidance for the critical aspects of our lives. Mythos is all about how we face death, how we confront falsehood, how and where we find the meaning that keeps us going. Tennyson has Ulysses, that great figure of Homeric myth, speak for all those who go journeying:

“…my purpose holds
To sail beyond the sunset, and the baths
Of all the western stars, until I die.”

Whether consciously or not, we find in myths the inspiration we need to continue traveling. We tap mythos to get things done. In confronting the challenge of interstellar flight, we are re-learning what as a culture we knew in the days of ancient Athens and the earliest Chinese dynasties, that our works must not just reflect but surpass us. Because they are multi-generational, we must hand them along to our children so that they can build upon them to discover their meaning. Yes, we are dealing with the greatest problems of physics and engineering we have ever faced. But we know in our bones that to be successful, an interstellar effort must supercede all of this.