Sun-Skimming Planets (and a Riff on Brown Dwarfs)

It’s time to catch up with recent exoplanet finds out of MIT as I start weaving in recent news with conference notes and ideas from other reading. Kepler 78b is much in the news because of its orbit, which takes it around its star in a breathtaking 8.5 hours, so that you can cram almost three Kepler 78b years into a single Earth day. That means, of course, that this is a planet that all but skims its star, with an orbital radius about three times the radius of the star. In Solar System terms, we’re talking about a world forty times closer to its star than Mercury is to the Sun. 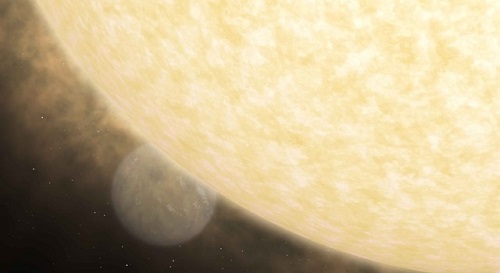 Image: A scorched Kepler 78b may have yet more to tell us, as the article below explains. Credit: NASA/JPL-Caltech.

With temperatures somewhere between 2300 K and 3100 K on the bright side (and I would assume this is a tidally locked world), we would be looking at a veritable ocean of lava on the surface. This MIT news release points out that because the researchers were able to detect the light emitted from the planet, we should be able to parse out further information about the composition of that surface and its reflective properties. From the paper on this work:

The robust detections of the occultations of the planet by the star, and of the time-variable illuminated fraction of the planet as it orbits around the star, make the system important for future observational and theoretical work. Observations with ﬁner time sampling could better pin down the transit parameters. This in turn would clarify the equilibrium temperature of the planet’s dayside… It is unclear at this point if the occultations would be large enough in any band to be detected with any telescope besides Kepler, but the prospect of studying the surface or atmosphere of an Earth-sized exoplanet may be attractive enough to justify a large investment of telescope time.

Kepler 78b orbits a late G-class star and has, according to the paper, the shortest orbital period among all planets yet found transiting a main sequence star. The researchers, led by Roberto Sanchis-Ojeda (M.I.T. Kavli Institute for Astrophysics and Space Research) note that the rarity of giant planets in orbits this tight may be the result of smaller rocky worlds being less vulnerable to tidally-induced decay of their orbits. Among the other Kepler Objects of Interest (KOI) are 17 exoplanet candidates with orbital periods of less than 16 hours and inferred planetary sizes smaller than that of Neptune.

All this intrigues me especially because of my interest in brown dwarfs, dim and cool enough that a planet needing warmth for habitability would have to orbit exceedingly close to the object. Then we come to work on KOI 1843.03, a still unconfirmed candidate whose transit period is a mere 4.5 hours. The MIT team involved with this one, led by Saul Rappaport, finds that for a planet to orbit its star this closely, it must be extremely dense to prevent tidal forces from disrupting it.

The paper on this candidate argues that while planets with masses from 0.1 to 8 Earth masses can exist with orbital periods as low as 3.5 hours, they must be composed largely of iron with silicate mantles. “A number of planets with very short orbital periods are starting to be found,” the paper adds, “and a continuing search for them is likely to prove fruitful.” And later:

We ﬁnd it interesting that constraints on the composition of close-in terrestrial planets can be obtained from such elementary considerations. There remain, of course, profound questions about why planets actually exist in such close-in orbits, which we will leave for another day.

The Rappaport work is interesting because of its methodology. The Roche limit is the distance from the star where its tidal forces would disrupt the planet and cause it to disintegrate. Even a small planet has to orbit outside that limit. Rappaport’s team argues that these ultra-short period candidates can be studied by using the Roche calculations to set limits on the planet’s mean density. If the planet’s radius can be measured by studying its transits (this contrasts transit depth with measured stellar radius) then the composition of the planet can be inferred.

Neither Kepler 78b (a G-class primary) nor KOI 1843.03 orbits a star anywhere as faint as a brown dwarf, but let’s extend our speculations to these dim objects. Nature seems to be telling us to expect planets just about everywhere we look. It will be fascinating to learn whether or not brown dwarfs can sustain planets pushing up against the Roche limit and thus remaining warm enough to sustain some kind of life. Gregory Benford’s story “The Man Who Sold the Stars” explores at its conclusion what a planet orbiting a dim Y-class brown dwarf might look like. Imagine, then, being on the surface of a planet circling the brown dwarf called Redstar:

Even though their helmets amped the visible spectrum, the effect was eerie. Stars shone in pale gray here against the inky black. The huge hull of Redstar hung as a burgundy disk cut off by the sea. Here and there across the long panorama of perpetual twilight, slanting rays of a deep Indian red showed floating plants, lapping on the waves in a somber sprawl. Everything glowed with infernal incandescence…. Down from the desolate slope to his left came an echoing cry, long and slow. In the thick air a thing like a huge orange gossamer butterfly fluttered on a thin wind. It swooped across a sky peppered with amber clouds and vanished with deliberate, long flaps of its enormous wings, vanishing behind a low eroded hill. 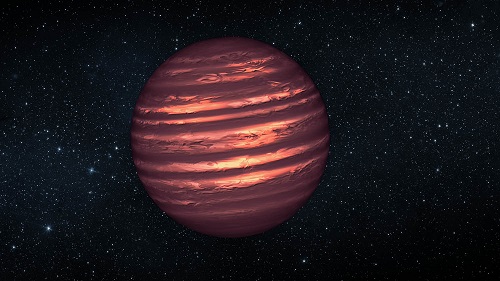 Image: Can a brown dwarf produce planets close enough to the object to be habitable? Credit: NASA, ESA, and JPL-Caltech.

A place like this is worth looking for, which is why brown dwarfs have such a large place in my imagination. Whether or not a Y-class dwarf could produce planets in such a configuration is something that only future observation will tell us. We are, though, beginning to learn the tricks of observing planets moving incredibly close to their parent star.

The paper on Kepler 78b is Sanchis-Ojeda et al., “Transits and Occultations of an Earth-Sized Planet in an 8.5 hr Orbit,” Astrophysical Journal Vol. 774, No. 1, p. 54 (abstract). The paper on KOI 1843.03 is Rappaport et al., “The Roche limit for close-orbiting planets: Minimum density, composition constraints, and application to the 4.2-hour planet KOI 1843.03,” Astrophysical Journal Vol. 773, No. 1, L15 (abstract). Greg Benford’s story is available in the Starship Century anthology.

Next post: Deep Time: The Nature of Existential Risk