The quickening pace of interstellar conferences in the past couple of years has been an encouraging surprise. If one necessary goal is to energize the public about the human future in space, then these meetings and their media coverage are surely part of the picture. I’m thinking about adding a calendar feature for conferences and other interstellar events to Centauri Dreams. Until then, here are some upcoming items, presented in chronological order.

“The Starships ARE Coming” 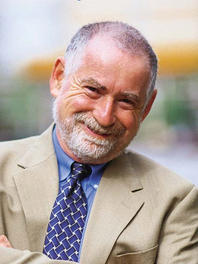 Peter Schwartz, writer, futurist and co-founder of the Global Business Network, will present a talk about starships and the scenarios that could lead to them on September 17th at 7:30 in San Francisco. Coordinated by the Long Now Foundation, the talk will track Schwartz’ presentation at the recent Starship Century conference in San Diego. From the Long Now site:

Participants included scientists such as Freeman Dyson and Martin Rees and writers such as Gregory Benford and Neal Stephenson. The professional futurist in the group was Peter Schwartz, who contributed scenarios playing out four futures of starship ambitions. To his surprise, exploring the scenarios suggested that getting effective star travel over the coming century or two is not a long shot. Even by widely divergent paths, it looks like a near certainty.

Schwartz’ talk “The Starships ARE Coming” will be presented at the SF Jazz Center in San Francisco. For more, click here.

The Orlando conference that kicked off the DARPA solicitation in 2011 is fondly remembered for its scope and depth, not to mention its sheer size. Now that the Dorothy Jemison Foundation for Excellence has formed the 100 Year Starship organization, we’ve had last year’s conference in Houston and anticipate an upcoming event in the same city. From the symposium website:

Across the globe, calls are being made for bolder human expansion into space beyond earth orbit. Achieving the interstellar journey in many ways must build upon, promote and establish fundamental research, technology development, societal systems and capacities that facilitate ready access to our inner solar system and which will leave an indelible mark upon life on earth. 100YSS is working to create new avenues to foster such innovative, robust collaborative, Transdisciplinary research, project design and technological development. The 100YSS 2013 Public Symposium—Pathway to the Stars, Footprints on Earth—seeks to highlight both the small incremental steps and radical leaps required to make significant progress on the way to interstellar space. 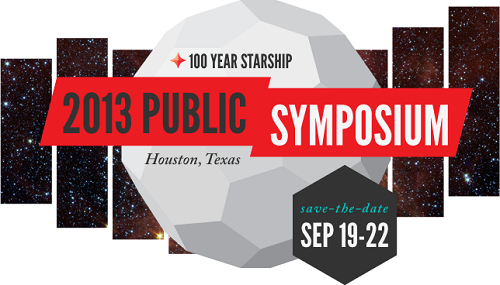 The 2013 Public Symposium runs from September 19-22 at the Hyatt Regency Downtown Houston. For details and registration, go here.

Physicist and science fiction writer Gregory Benford will appear at the Crawford Family Forum for a public conversation with KPCC’s Mat Kaplan, host of a science series called “NEXT: People | Science | Tomorrow.” Kaplan is also a host for the Planetary Society’s Planetary Radio. From the KPCC website:

Our ancestors gazed at a night sky filled from horizon to horizon with brilliant stars. Were they dreaming of reaching for the cosmos even before they were fully human? Regrettably, interstellar voyages with today’s technology would take thousands or even tens of thousands of years. We’re not there yet, but some of the smartest people on our planet are working on ways we can conquer the final frontier. Propulsion by energy beam, warp drive and other technologies are being researched with encouragement from NASA and other organizations.

“NEXT: Is This the Starship Century?” will take place on Wednesday September 25 from 7:00 to 8:30. For more information, click here. The Crawford Family Forum is at 474 South Raymond Avenue, Pasadena, CA 91105.

The second Starship Century Symposium will be held Monday October 21 at the Royal Astronomical Society on Piccadilly in London, with Royal Astronomer Martin Rees as a featured speaker. Including talks and a panel, the event will feature both James and Gregory Benford, editors of the recently published Starship Century anthology, which will be sold on the premises (proceeds going toward interstellar research). I should also mention that those of you who have asked about ebook editions of Starship Century can now find it online with color illustrations at Amazon, Smashwords and Barnes & Noble. Admission to the symposium is free.

The schedule for this event is still being firmed up, but speakers will include astronomer Ian Crawford and Stephen Baxter (tentative), with a starting time of 10:00 AM.

And although it’s not interstellar in nature, I do want to mention a competition of the sort I hope we’ll see more of in relation to space themes. Science education non-profit Iridescent is partnering with Warner Bros. Pictures in what is called the Gravity Design Challenge, based on the upcoming George Clooney/Sandra Bullock film Gravity. The film, due out in October, is a survival tale set in low-Earth orbit. Iridescent is hosting the Gravity Design Challenge on Curiosity Machine, its online science studio. The idea is that teenagers will work with their parents to create what Iridescent calls a ‘Rube Goldberg Machine rocket’ that simulates a space mission.

The month long contest is ongoing and ends September 10. The grand prize winner receives a trip to New York and four tickets to the premiere of Gravity. From an Iridescent news release:

Volunteer mentors, including professional engineers, faculty and students from a variety of organizations, including Boeing, Columbia University, Stanford University, UC Berkeley, USC, and University of San Francisco, will provide feedback to Gravity Design Challenge participants through the submission period. A panel of experts from the astrophysics field will judge the final entries.

The idea of leveraging popular entertainment in the direction of science education is one that could prove fruitful as a way of nudging young minds toward careers in aerospace, just as science fiction itself does. There are all kinds of creative ways this might be accomplished on the Net, and we’ll see whether future media events can tap into a similar educational impulse.

Next post: Thoughts on Ceres (and Memories of Pohl)