Thoughts on Ceres (and Memories of Pohl)

Working on this entry last night, I found my thoughts turning inescapably to Frederick Pohl, the iconic science fiction writer and editor whose death was announced just hours ago. Most Centauri Dreams readers doubtless have their memories of Pohl’s work, perhaps from the great novels of the 1950s like The Space Merchants and Gladiator-at-Law or the striking Gateway of the late 1970’s that would spawn the Heechee series. As something of a bibliographer, I’m also fascinated with Pohl’s role as a youthful magazine editor. He was editing Astonishing Stories for the pulp house Popular Publications at the age of 20, an occupation that would deepen into lengthy runs at Galaxy and IF and later stints editing books for Bantam. 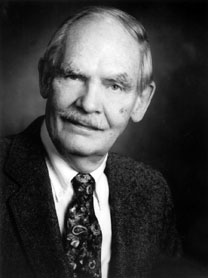 Pohl’s early days in science fiction are captured memorably in The Way the Future Was, a 1978 reminiscence that had me digging through my collection of old pulps to look up issues he had edited. Astonishing was always a favorite of mine, but I was surprised to realize how fond he must have been of Super Science Stories, which he oversaw from 1939 to 1943. In fact, one of Pohl’s last blog entries this July was an exhortation to bring back Super Science Stories in a new format, basing it on reprints much like the late Famous Fantastic Mysteries created by the Munsey group in the 1940s.

“I know I shouldn’t give it a thought, but if an offer got real, how could I say no?” Pohl wrote, not six weeks before his death. I would have loved to have seen that revived magazine in his hands.

But back to business. I learned of Pohl’s death while drawing up some notes on the asteroid belt, with which Pohl will always be associated in my mind because of the Heechee novels, in which some asteroids turn out to have been the site of an incomprehensible alien technology. The juxtaposition seemed utterly appropriate, for I remember reading Gateway in 1980 and thinking that Pohl had deftly sidestepped the interstellar propulsion conundrum. Rather than spending centuries developing the technologies to make a star mission happen, maybe we just run across an artifact that does things we can’t explain and makes such journeys possible. A thousand starships are at Gateway for the asking, though how they work is a mystery. I wouldn’t dream of throwing in any spoilers here, so you’ll have to go to the novels for more.

Ceres Inside and Out

What a grand notion the Heechee novels represented. It’s a shame Pohl won’t be here two years from now when the Dawn mission finally reaches the dwarf planet Ceres, which may hold a few surprises of its own. Orbiting in the main asteroid belt between Mars and Jupiter, Ceres is nonetheless much closer in composition to Jupiter’s moon Europa than to the rocky debris around it, particularly from the standpoint of astrobiology. Is it in fact a closer, easier Europa? This article in Astrobiology Magazine offers some thoughts on what Dawn mission science team liaison Britney Schmidt calls “a game changer in the Solar System.”

The change in nomenclature from asteroid to dwarf planet is indicative of the changes in our view of this object over the decades. When astronomer Giuseppe Piazzi discovered it in 1801, the object seemed inevitable, for as early as 1596 Johannes Kepler had noted the gap between Mars and Jupiter, and Johann Bode would later point to the probability of finding a planet there. The hypothesis of a pattern in planetary orbits like this has now been discredited, but the discovery of Uranus in 1781 seemed to confirm it and Ceres would be found shortly thereafter. As more and more asteroids began to be discovered and the true size of Ceres was realized, it lost the planetary status it had been assigned for almost half a century in astronomy books.

There’s no need to go back into the 2006 debate about what constitutes a planet other than to say that Ceres has now emerged as a ‘dwarf planet,’ joining Eris, Haumea, Makemake and Pluto in the designation. Confusingly enough, Ceres is still referred to as an asteroid in many quarters, though its unique status is conveyed in its round shape, an indication of formation in the early Solar System. The wild card, of course, is that there is the potential for a layer of water ice under the surface. Twice the size of Enceladus, Ceres is less than three times as far from the Sun as the Earth, making it a tempting target for studying water’s history as our system evolved.

Given the surface of objects like our own Moon, we can assume that Ceres has withstood its share of impact events in the early days of the Solar System, but an icy surface could have simply erased the evidence. Spectral evidence is also informative. From the article:

“The spectrum is telling you that water has been involved in the creation of materials on the surface,” Schmidt said.

“[Water is] literally bathing the surface of Ceres,” she said.

In addition, astronomers have found evidence of carbonates, minerals that form in a process involving water and heat. Carbonates are often produced by living processes.

I think Schmidt makes a good point, too, in going on to argue that Ceres may be just as interesting as more distant moons like Europa and Enceladus. For one thing, while Europa taps tidal interactions with Jupiter as a source of heat, Ceres draws on the Sun. For another, it’s considerably warmer than Europa, and unlike the latter, is not bathed in Jupiter’s deadly bands of radiation. Orbital or lander operations on Ceres should pose fewer challenges than Europa. What sets Europa apart, though, is the probability of a liquid ocean, while Ceres’ water is most likely in the form of water ice located in the mantle that wraps around its solid core. 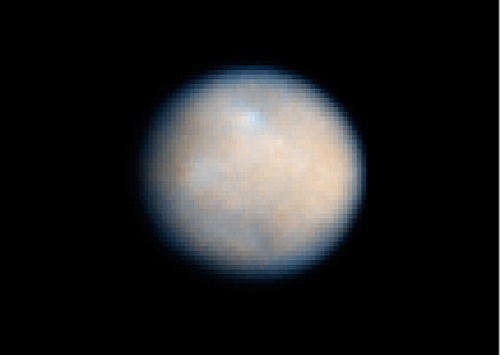 Image: Scientists using the Hubble Space Telescope found Ceres was more like a planet than an asteroid — information that eventually led to a change in its categorization from asteroid to dwarf planet. Ceres’ mantle, which wraps around the asteroid’s core, may even be composed of water ice. The observations by NASA’s Hubble Space Telescope also show that the asteroid has a nearly round shape like Earth’s and may have a rocky inner core and a thin, dusty outer crust. Credit: NASA/ESA/SWRI/Cornell University/University of Maryland/STSci.

I’ll return to the science fiction theme by mentioning that Larry Niven’s Known Space stories posit an asteroidal government based on Ceres, while the dwarf planet also appears in various roles in the hands of writers from Alfred Bester to Robert Heinlein and, in recent days, James S. A. Corey. The Dawn mission will presumably not find any Pohl-style gateways among the asteroids, but what an opportunity Ceres presents. In 2015, five months of Dawn’s orbital operations there will turn a fuzzy image into sharply resolved surface features in the same year that New Horizons does the same for Pluto/Charon. Ceres may reshuffle our thinking if we learn that it once had the potential for habitability. What we won’t have, alas, is Frederick Pohl’s fictional take on what a human mission to Ceres might look like and the wonders it might find.