Centauri Dreams readers will be familiar with Kelvin Long as a contributor here and as the author of Deep Space Propulsion: A Roadmap to Interstellar Flight (Springer, 2012). But the indefatigable Long has a broad range: He is the co-founder and Executive Director of the Institute for Interstellar Studies, former Vice President and co-founder of Icarus Interstellar, Managing Director Stellar Engines Ltd and Chief Editor of the Journal of the British Interplanetary Society. Fired with enthusiasm after the recent conference in Dallas, Kelvin took a new tack in this piece, wanting to communicate the experience of immersion in the new interstellar movement. 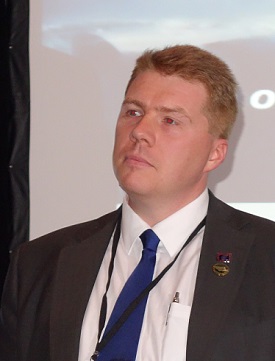 We huddled in this place, gathering our kindled fires and showing them to each other “look what I made”, “look what I discovered”, each with a gleam and a tear in the eye as we thought of the visions of vessels that could travel across space to other places and other times. This was the gathering from across the planet Clarke called Ocean, although the inhabitants of its lands knew it as Earth. They travelled and arrived, with expectations and excitement brimming to the boil as the presentations rolled out one by one, over a packed and eventful four days.

Boy and girl, young and old, we spanned over a century in the history of the human timeline, sharing our experiences, knowledge and wisdom, laughing and crying at the truths revealing themselves to us as the whispers and the breath left our lips and entered the ears and minds of each other. We talked about technology and engines of all types; riding the light of beams, or sailing on an electromagnetic wind from the Sun, or energising the atoms of hydrogen, to release those little photons of energy. Those timeless particles, which contain the very tease that they can travel at speeds we can only dream of. One of our own called Albert, out of a place called Bern, forbids us joining their frolics and we must forever stay bounded to the speeds of particles of matter. But others have alternative ideas, to reverse the charge of matter itself, and in a laboratory to see the cosmic curvature warped.

We gnashed our chins about space probes, big and small; the size of Moons to the size of pins, there was no limit to the meaning of a Starship in our minds eye. They all had structure, payloads and engines of some sort and everyone had their favourites, defending them like kids harking on about their favourite sport cards in a sticker book. The forces of nature were used in their fury, all to be bent, twisted and perturbed by the power of our mentality. Magnetic and electric fields to move excited charges, nuclear forces to harness energy for power, and gravitational forces to tame those dark stars of the deep, from which only a singularity grows and light is forever trapped within an eternal prison, from which mirages of relativity play out in the optics of our eyes. All obstacles to the goal were seen as that, obstacles to be climbed or loop-holed, there was nothing that could block our path to the pin pricks of light in the night. Our ambition knows no boundaries, and indeed we are Kings and Queens of infinite space, and we are not bounded by any nutshell.

The very definition of technology was debated and placed in the context of a living architecture, and not just in the perspective of inert constructions devoid of process in themselves. Our convergence with it was seen to continue ever more, as we rushed towards the future together, towards a dualistic landscape where the separation between us, and them, become blurred and even meaningless. In such a future of possibilities, how can we think to extrapolate as to what and when might occur? How can we conceivably fathom what is at the end of the road, when we are yet to even set forth on the journey?

The existence of “them” was thought through, and our possible encounter should it ever come to be. Some would have us shout now into the darkness “we are here come find us” whilst others would have us be silent and utter a hushed discrete tone. Are they waiting for us? Is there no-one? Let’s go see we said, let’s build vessels made of matter and energy to cross space and time and have these aged old curiosities slain to the books of our encyclopaedias. And what might we learn? That we are very small and really nothing of significance, or that we are similar to them, struggling to survive and prosper in the great Universe of age, as the Starmaker moves on dispassionately, perhaps to create another one of its other experiments and to begin the cycle yet again. 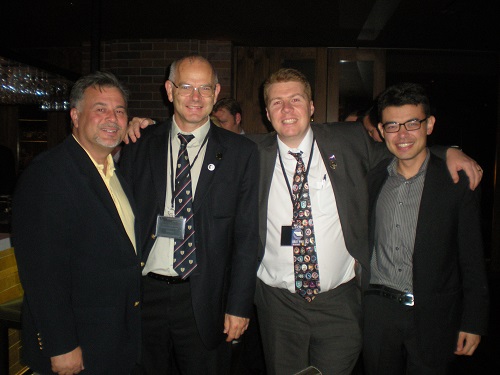 And for the first time, many came together, not for themselves, but on behalf of others, in a congressional session. Questions were posed, designed to tease out views, to create conditions of discomfort so that reasoned debate may be afforded, to fully scope that space. All people were civilized, courteous and wise, no fighting over electronic devices so that the world could hear just them, but all were to be heard, so was the consensus. We are one people, from this planet called Ocean that contains a little dirt; yet, we fight over that dirt, and seek to own one spot so that another cannot have it. But the grand adventure of the stars forces us to see beyond that measure, to see ourselves in a different context, not as a divided people, but as one with a common ancestry and in harmony with each other. Our trajectory is co-joined, the stars call us loudly across the void of the deep, and we answer in no uncertain terms; “We… are coming”.

The Starship builders – we are the dreamers of the future and the children of the renaissance Master. We see no boundaries to our desires and we are strong and steadfast in our vision to see it achieved. There is no holding us back, we are an ever present tide, an ever arriving force, and though we may drift from time to time from our path, we will always long to return to our goal and see it continued, because that is the compass of our migration, to return from whence we came.

I’m asked for my recollections of Starship Congress 2013 and I could tell stories of what was said and who did what. But it’s better to convey the emotion of the event, to place it in the context of its humanity, that we were there, and we…were moved. Oh what hope we can hold for our species when we do things like this, what optimism, what power we have over ourselves. Let’s have more of it, let’s talk, lets travel, lets design, lets calculate, let’s build…let’s be one people facing the challenge of the stars and see it solved in this generation or the next. Our equations play music to us, as they sing the song of the Starship, and we each try to compose a melody that resonates to the challenge, and thereby claim “Eureka! I have got it”. But no, we have all got it within ourselves and this then is our task – to put fires in the bellies of all the people of the world, to liberate them from their monotonous existence and shout “WAKE UP!….DON’T YOU KNOW THE STARS ARE CALLING YOU TOO?”