Yesterday’s look at Sara Seager’s new equation pointed out that it was designed to estimate how many planets with detectable signs of life could be discovered in the near future. The interview Seager gave to Astrobiology Magazine contrasts her work with Frank Drake’s famous equation to estimate the number of extraterrestrial cultures able to communicate with us. The comparison is understandable given the high visibility of Drake, but what I have called the Seager Equation is really something other than a revision of the earlier Drake principles.

For Seager’s focus is on the detection of any kind of life, not just communicating technological cultures, and her work is especially attuned to M-class dwarf stars, the kind of stars on which we’re most likely to be able to perform the needed observations in the near term. The biomarkers we’re looking for will probably first be examined by the James Webb Space Telescope, which will analyze the light from a parent red dwarf as a planet transits its face. The changes in starlight will tell us much about what kind of gases are found in the planet’s atmosphere.

At the European Planetary Science Congress at University College London, now in session, Lee Grenfell (DLR Institute of Planetary Research, Berlin) has also been talking about biomarkers. Oxygen, ozone, methane, and nitrous oxide when detected simultaneously would be signs of likely life, and Grenfell’s interest is in how we might go about detecting them. Like Seager, he’s interested in M-class dwarfs. His team has developed computer models to simulate different abundances of the biomarker gases and how they would affect the starlight filtered through a planetary atmosphere. The choice of M-dwarfs was an obvious one, says Grenfell:

“In our simulations, we modeled an exoplanet similar to the Earth, which we then placed in different orbits around stars, calculating how the biomarker signals respond to differing conditions. We focused on red-dwarf stars, which are smaller and fainter than our Sun, since we expect any biomarker signals from planets orbiting such stars to be easier to detect.”

Grenfell and company have clarified the effect of ultraviolet radiation from the parent star on the biomarker gases. Weak UV leads to less production of ozone, making its detection problematic even with upcoming instruments like the European Extremely Large Telescope. Too much ultraviolet is also a problem, causing increased heating in the middle atmosphere that effectively destroys the biomarker signature. Ozone detection in these models relies on an intermediate UV value. 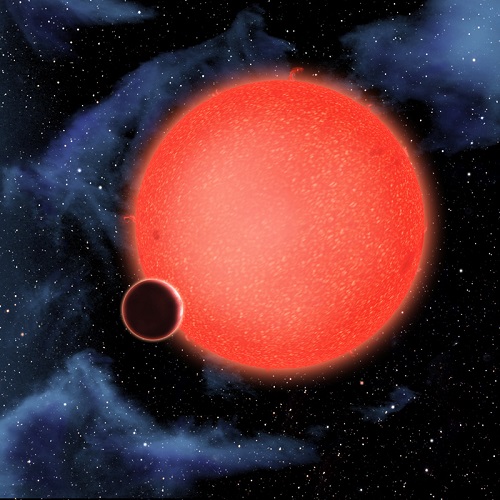 Image: GJ1214b, shown in this artist’s view, is a super-Earth orbiting a red dwarf star 40 light-years from Earth. Planets transiting red dwarfs may be the first upon which we can apply our biomarker detection methods. Credit: NASA, ESA, and D. Aguilar (Harvard-Smithsonian Center for Astrophysics).

We’re in the early days of biomarker studies, but it’s worth mentioning that we’ve already used the EPOXI mission (the combined extended mission of the Deep Impact spacecraft) to study the Earth from millions of miles away, and the Galileo spacecraft looked for our planet’s biomarkers when it made an Earth flyby back in 1990 on its way to Jupiter (Carl Sagan’s 1994 book Pale Blue Dot gives a wonderful account of just how tricky it is to take such readings, and what they can tell us). Studies like these are necessary warm-ups for future work around distant stars.

It could be said that in these cases and in Grenfell’s work, the limitation is the modeling of the exoplanet, which is explicitly based on Earth. But we start with Earth because it is obviously the world we know the most about, and the one most capable of being studied exhaustively with these methods. Learning how to look for biomarkers on our own planet will help us develop the tools we can apply to more exotic environments like that of an M-dwarf solar system. We’ll also need to distinguish between signals arising from life and those created by natural processes.

Sara Seager thinks there is at least a small chance that we’ll pull off such a detection within the next ten years using the JWST, but even if that’s an optimistic reading, the tools are falling into place to make a biomarker detection feasible within a few decades. If it does happen, then what many of us assume — that life forms readily in the universe — will begin to seem more likely. The larger question of intelligent life that can build a technological culture will presumably take much longer, unless a SETI reception suddenly answers both questions with a single paradigm-shattering signal.