Tracking Voyager 1 outbound for the past decade has been at times anti-climactic. Had the spacecraft reached interstellar space or hadn’t it, and how exactly would we know? The announcement last week that the milestone has been reached will forever mark August 25, 2012 as the date when a human-built object, still returning data, made the crossing. That it took a year of analysis only reminds us how much we have to learn about even this closest region of the space between the stars, where some interactions with the Sun continue.

“We have been cautious because we’re dealing with one of the most important milestones in the history of exploration,” said Voyager project scientist Ed Stone of the California Institute of Technology in Pasadena. “Only now do we have the data — and the analysis — we needed.” 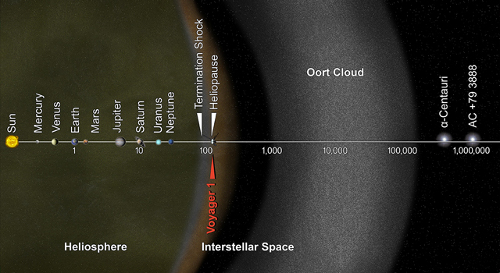 Image: I use this image — or one much like it — all the time in my talks because it puts huge Solar System distances in perspective. The scale bar is measured in astronomical units (AU), with each set distance beyond 1 AU representing 10 times the previous distance. Each AU is equal to the distance from the Sun to the Earth. It took from 1977 to 2013 for Voyager 1 to reach the edge of interstellar space. Credit: NASA/JPL-Caltech

The caution has certainly been justified. Voyager 1’s plasma spectrometer — able to measure the ionized gas, or plasma, that essentially inflates the heliosphere — stopped working all the way back in 1980. The direction of magnetic field lines emanating from the Sun became became the alternative marker, since solar plasma and interstellar plasma were expected to differ in direction. Another marker: The level of charged particles inside the heliosphere should drop and the level of galactic cosmic rays should rise when the heliosphere was truly crossed.

Last summer brought changes beginning in May and accelerating in July with a jump in the number of outside particles and a drop in the charged particles from the Sun. Confusingly, the magnetic field direction had not changed — was the spacecraft still inside the heliosphere? A solar storm early in 2012 may have furnished the answer. Leading the plasma wave science team, Don Gurnett and Bill Kurth (University of Iowa) realized that radio activity observed earlier in the mission had been the result of interstellar plasma encountering bursts of solar material.

The oscillations caused by such events should be observable when Voyager 1 is surrounded by interstellar plasma, and plasma oscillations in the spring of this year had the signature of that plasma, evidently the outflow from the March, 2012 solar flare activity. The scientists made the call based on the observed electron density of the plasma, which is higher in the interstellar medium. Working back through the data, the duo could pin the onset of these interactions to August of 2012, consistent with the earlier changes in charged particles and doubtless related to the burst of solar activity that set the plasma in motion. While amidst interstellar plasma, the spacecraft was still feeling some influence from the Sun. Let me quote Stone again on this:

“Now that we had actual measurements of the plasma environment – by way of an unexpected outburst from the sun – we had to reconsider why there was still solar influence on the magnetic field and plasma in interstellar space. The path to interstellar space has been a lot more complicated than we imagined.”

NASA is now saying that by August 25 the spacecraft had entered the interstellar region for good, an indication that the heliopause had been crossed. The Voyager team is in agreement that the spacecraft is in interstellar space, although Stone refers to it as “a mixed, transitional region,” and we still see some solar influence, possibly including the unchanged direction of the magnetic field, which is puzzling. Voyager 1 seems to be illustrating what we have been learning for the past sixty years, that the Solar System and its surroundings are much more varied and diffuse than we previously thought. We once conceived of our system as a place of nine planets and a belt of rocky debris. Now we know about numerous small worlds in the Kuiper Belt, a second band of rock and icy objects, and have re-tooled the very definition of the word ‘planet.’ We’ve also learned we’re surrounded by trillions of comets.

That latter point deserves some attention, for the numerous headlines talking about Voyager 1’s departure from the Solar System reflect a continuing misunderstanding about what the system actually is. The Oort Cloud is widely accepted as the home of long-period comets, occasionally jolted by gravitational interactions into sending a new comet into a Sun-grazing orbit. To leave the Solar System, we have to speak of going to a place where the Sun’s gravity no longer dominates, and that could take us out 100,000 AU or more. Voyager 1’s passage through the Oort Cloud will be measured in tens of thousands of years. In 40,000 years, Voyager 1 will be closer to the star AC +79 3888 than to our own Sun.

One of those headlines mistakenly saying that Voyager 1 had left the Solar System occurred in the Washington Post, but the article nonetheless contained this gem:

Launched in 1977, the Voyager’s computing power was impressive for its time. The spacecraft was designed to run most of its operations itself, since the billions of miles separating it and Earth make communication laggy. To accomplish that, Voyager has three interconnected computer systems: one to control the craft’s flight and altitude, another to control its instruments, and a third to manage the first two. The computers can process about 8,000 instructions per second — a fraction of the capability of your smartphone, which handles upwards of 14 billion each second. With memory measured in kilobytes, they can hold only hold a few thousand words worth of text.

We haven’t left the Solar System, but at 121 AU we’ve punched through the heliopause and are in a region where our spacecraft is surrounded by material from other stars rather than being dominated by plasma from the Sun. The achievement is colossal: We launched the Voyagers in 1977 on a mission designed to study specific planetary targets, with no expectations that they could be pushed to become our first interstellar probes. Their data are stored on 8-track digital tape recorders and broadcast back to Earth with a 23-watt signal. That Voyager 1 has now managed the journey speaks to the quality of its construction and the dedication of the teams that have monitored it over the decades. What more will it tell us before it falls finally silent?

Addendum: This just in from Jim Benford, who has been calculating when Voyager 2 and New Horizons will cross into interstellar space:

New Horizons is going the same direction as Voyager 2, as projected onto the ecliptic, but Voyager 2 is going south of the plane, New Horizons staying approx in the plane. It’s headed toward Sagittarius.

Next post: Comet Impacts and the Origin of Life