There is much to say about the 100 Year Starship Symposium in Houston, and as I have done with prior conferences, I will be drawing on my notes in the coming weeks. But I want to start the Houston coverage with the good news that emerged from the outer Solar System. Some time back, Jon Lomberg came up with the idea of sending a new kind of message into deep space. No, this wasn’t to be a controversial signal beamed at a nearby star, but a message from humanity that would fly aboard one of our spacecraft. New Horizons is already in the outer system on its way to a Pluto/Charon encounter in 2015 and, we hope, a close pass of a Kuiper Belt object after that. But Jon thought we could still use it, Voyager style, to house the sights and sounds of Earth.

The plan: To re-purpose a chunk of New Horizons’ computer memory, about 120 MB worth, after it has achieved its mission and is continuing out into interstellar space. The 120 MB figure is at this point a rough guess; it represents about 1 percent of the onboard memory. The message from humanity could be assembled by crowd-sourcing the project, getting input from all over the world, and uploading to the spacecraft — Lomberg’s idea is to begin a global contest allowing people to submit their ideas exactly one year before New Horizons flies by Pluto in July of 2015.

Image: Jon Lomberg, who is once again thinking about how to send the sights and sounds of Earth into the cosmos.

I was happy to join the advisory team for the project, for if there’s anyone who can make this happen, it’s Jon. He’s well known as an artist who worked with Carl Sagan on COSMOS and with Frank Drake in designing the cover for the Voyager Interstellar Record. Sending human artifacts on interstellar trajectories is not exactly a common thing to do, but Jon Lomberg is one of the few who has experience at it.

While conversations about the project went into into full gear on the Net earlier this summer, my son Miles went to work on the website that would eventually take the New Horizons Message public. I had assumed when I left for Houston and the 100 Year Starship that I would be focused solely on the various meetings and presentations there, but on Friday night Miles, who had been tuning up the site off and on during the conference, told me that it was ready to go. A quick confirmation with Jon gave the go-ahead to make the project public. Serendipity rules, for who better to make the announcement than the guiding force of SETI, Jill Tarter, who was herself on Jon’s advisory panel, and who even as we were discussing this happened to walk right by? 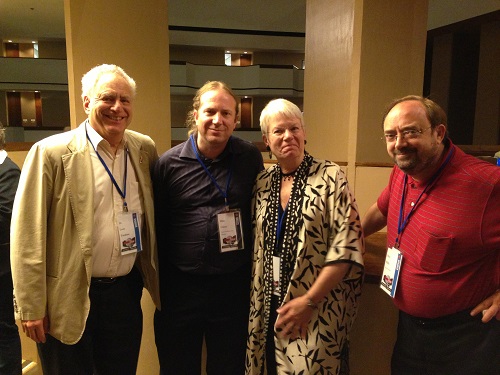 Thus Friday night, which had already been enlivened by a panel with writers Jack McDevitt, Ken Scholes, Karin Lowachee and Mary Doria Russell, became an impromptu planning moment in the crowded foyer outside the ballroom. Jill quickly agreed, Miles forwarded the relevant URL to her computer, and the next morning, after guiding an excellent panel on recent discoveries (about which more later this week), Jill announced the New Horizons Message Initiative and put the site up on the screen. We then asked the formidable LeVar Burton, also intercepted in the foyer, to blast out a tweet to his 1.7 million followers on Twitter, and the initiative was launched. 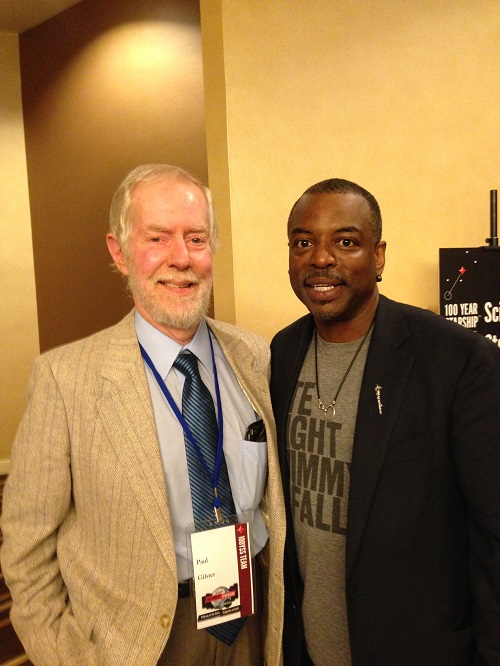 Image: A quick chat with LeVar Burton. Talk about a fun guy to be around, LeVar is a strong advocate for pushing to the stars, and he signed off on the New Horizons Message without hesitation.

There is much to do. First of all, we need people to go to the site to sign the petition to demonstrate public support that will persuade NASA. The New Horizons Message is a private initiative, and thousands of signatures on the online petition along with endorsements from leaders in astronomy and space sciences will be crucial in making the case to NASA. Also ahead is a fundraising campaign to provide the necessary budget supporting the project, which will pay for developing the techniques for storing and sending the message, holding meetings and conferences to plan and manage the submission process, and formulating and executing the ensuing contest.

The key here is to make this a message from the entire world, searching globally for pictures and other materials that can be voted upon in various categories of content. A self portrait of Earth in the early 21st Century will thus emerge. Unlike the Voyager Golden Record or the Pioneer plaques, however, this is a record that, once uploaded, can be updated over time, as long as the spacecraft is still in communication with the Earth.

No one realistically sees the New Horizons Message as a way to reach ET. This initiative is really about the Earth, and you might think back to the days of Apollo 8 and the stunning Earthrise photograph that so changed our perspective on our own planet. Astronaut Eugene Cernan is famous for saying “We went to explore the Moon, and in fact discovered the Earth.” That sentence was printed on a large poster in the ballroom at the 100 Year Starship Symposium, and along with it a parallel one: “What will we discover from another star?”

It’s a question with profound implications. I’ve said before in these pages that while the problem of the starship is a problem of science, it is also a problem of philosophy, for we have key choices to make as a species on how we want to live. Turning our aspirations toward space offers us the opportunity to reflect on our place in the cosmos and to see what we are doing in a new light. I strongly support the New Horizons Message Initiative and hope you will as well.