The 100 Year Starship Symposium forces an interesting conversation simply by virtue of its name. I learned this yet again this morning when I met a neighbor out walking his dog. He knew I had been in Houston and that the subject was space travel, but he assumed we must have been talking about Mars. “No,” I replied, “we’re actually talking about a much more distant target.” His eyes lit up when I described the Houston conference, and in particular when I talked about multi-generational efforts and what achieving — or even just attempting — them could mean.

The odd thing is, I get this reaction often when talking to people about interstellar flight. Sure, you’d expect the audience at the Houston symposium to be onboard with the idea of outcomes beyond their own lifetime, but I’m finding a genuine fascination with the idea among people who otherwise have no connection with space. I frequently lament the extreme short-range nature of modern society, but it heartens me to keep encountering what seems to be a hunger to overcome it. Maybe somewhere deep within all of us, not just a few of us, there is a hard-wired impulse to make a difference over not just the coming year but the coming century.

Let’s hope so, for if that’s the case, making the pitch for long-term thinking is going to bear fruit. The other definitional matter that the 100 Year Starship name brings up is the nature of the project itself. Is it a ship that will take a century to reach its target? Is it a ship that will be built in a hundred years? When my neighbor asked that one, I told him that what really counted here was finding out how to sustain an organizational effort over an entire century. At the end of that period we may be in position to build an interstellar craft, but we can’t know the timing. What we have to master is long-haul effort that gets handed off as needed to our descendants.

I’m swiping the title of Hugh Brody’s wonderful book on traveling the Canadian sub-arctic (a must-read if you’re not familiar with it) to point to how one person’s mapping of distant landscapes leads to another’s fascination with the place and eventual journey there. Starship planning, obviously audacious and open-ended, is about constructing multiple pathways to attack the interstellar question. In her introductory talk, 100 Year Starship leader Mae Jemison emphasized the multidisciplinary nature of the effort, pulling from the ‘hard’ and ‘soft’ sciences as well as the humanities to engage the broadest spectrum of the population:

“We need to create and inspire and maintain an environment where starflight can eventually be achieved,” Jemison added. “We need to foster explosive innovation, technical achievement, and societal advances in economics, governance, behavior, and education, not just in the hard sciences. This won’t happen without engaging people across lines of ethnicity, gender, and geography. No one organization can do it all. It is an audacious, bold venture that won’t be led by naysayers or caution. We are here to squander ourselves, squander ourselves for a purpose.” 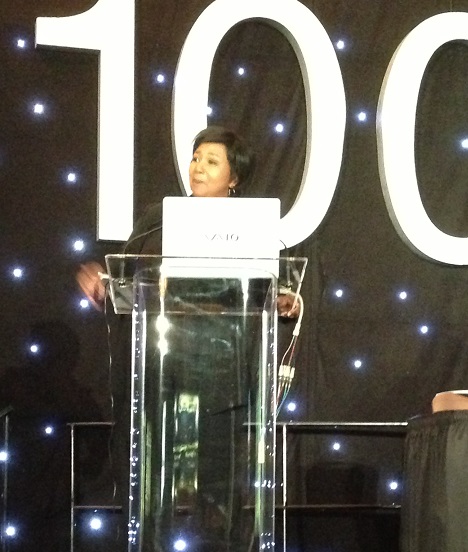 Image: Mae Jemison delivering her opening address at the symposium.

In the following talk of the plenary session, Loretta Whitesides, who along with husband George is looking toward the next generation of suborbital flight through Virgin Galactic (George is its CEO), told the crowd that the people who go to the stars won’t be us, but people much like us. The point she was making is that if we do manage to overcome the huge challenge of starflight, we will have managed it only by developing a community that can keep the effort going, transforming its participants in the same way the much-noted ‘overview effect’ has transformed so many space travelers by letting them see their own planet from a unique perspective.

This is a kind of societal evolution that takes place one mind at a time, but we can try to communicate it through public outreach and individual conversation. I’m reminded that Mae Jemison has said her own experience of the overview effect on her flight aboard Endeavour was slightly different than what some astronauts have reported. As she told the Houston audience, she naturally felt the deep connection many have reported with the blue and green Earth, but also a surprisingly strong connection with the cosmos that surrounded it. If it’s true that nobody shows a child the sky, maybe nothing but experience in space will gradually bring enough voices to this effort to reach the kind of cultural tipping point that can think and plan centuries ahead.

All of this raises questions of focus: If one thing is clear, it is that no starship will ever be built without the propulsion system to drive it to its destination. And if it is to be a starship with a human crew, no starship will ever fly without our mastery of closed-loop living systems, a subject about which we have much to learn through theory and experiment. But focusing solely on propulsion and life support would ignore the fact that starflight will be transformational in every aspect of life. Thus the relevance of John Carter McKnight’s excellent track that addressed culture, ethics and governance, of Dan Hanson’s track examining how the effort at starship building could enhance life here on Earth and Karl Aspelund’s track on systems design.

The net was broadly thrown, with Jill Tarter’s ‘State of the Universe’ panel ranging from the construction of the Square Kilometer Array to a timely update on the progress of Voyager 1, while the ‘Trending Now’ panel led by Hakeem Oluseyi addressed everything from the Colossus telescope (a particular interest of mine) to Ronke Olabisi’s discussion of growing bones, meat and other organics in the laboratory. The science fiction panel led by Levar Burton placed starflight in the context of culture and asked how we are portraying it in fiction today. 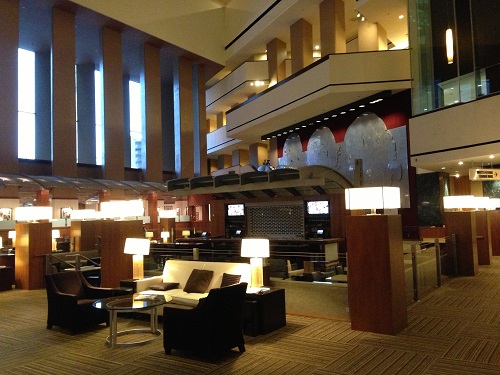 Image: The lobby of the Hyatt Regency in Houston, quiet in this morning shot, but the scene of numerous conversations as the day wore on.

I have notes on all of these events and more, and as I go through them in coming days I’ll report some of them in greater detail. But talking to my neighbor this morning reminded me of the importance of pulling interstellar ideas across many disciplines even if some of these matters can be addressed no more than theoretically. Questions of ethics aboard a starship, for example, may seem irrelevant if we have no engine to fly the starship in the first place, but it’s important to recognize that it will take more than a single century to resolve seemingly intractable problems that, if they divide humans on Earth, could destroy them over the course of a multi-generational star mission. There is also something to be said for energizing the arts by setting high goals that in turn inspire the general public.

Learning how to build science advocacy organizations, something Louis Friedman did brilliantly with the Planetary Society and which he examined in a luncheon talk, will be crucial in sustaining an effort that lasts centuries or more. So we need to be pulling in ideas across the disciplines. I’ll close today by quoting Kathleen Toerpe (Northeast Wisconsin Technical College), who is deeply involved in multidisciplinary activities for space through her work with the Astrosociology Research Institute. I’ll use her own words rather than my more fragmentary notes, lifting them from a recent comment she posted on this site in early September as she prepared to make the trip to Houston:

I’m one of those humanists and social scientists you’re including in this grand mythos of interstellar travel and I thank you for your very warm welcome to the adventure! Some of us are gathering under the umbrella of a newer academic field called “astrosociology” – a multidisciplinary group including sociologists, philosophers, poets, historians, psychologists, artists, etc.- all of us passionately researching, exploring and anticipating the human dimensions of space. We’re uncovering what connects the science of space exploration with the individuals and societies that undertake it and with the broader humanity that it intends to benefit. Our work directly benefits scientists and space research while it creates greater public awareness, knowledge, and hopefully, support for continued exploration. Myths are, by their nature, collaborative narratives. It is in community that they are created, shared and wield their power. Your reflections challenge us all to transcend disciplinary boundaries and collaborate even more profoundly toward our space-faring future.

Conferences are energizing but in some ways frustrating — there is always more to do than anyone can fit in, and multiple tracks kept me hopping from one room to another. I particularly wanted to talk to Dr. Toerpe about what she was doing at the Astrosociology Institute but failed to catch her at the right time (though I’ll try to talk her into writing something about the Institute for Centauri Dreams). Tomorrow I’ll move on in my coverage of the 100 Year Starship Symposium to review some of the discussions both in the track sessions and the panels.