One of the things I admire most about Eric Davis is his seemingly inexhaustible supply of energy. The man is constantly in motion. Davis (Institute for Advanced Studies at Austin) is active in both the Tau Zero Foundation and in Icarus Interstellar, and deeply involved in the propulsion community at numerous conferences, all in addition to his duties at IASA. He has also, for the past two years, served as a track chair at the 100 Year Starship Symposium, a role fraught with its own difficulties as it involves coordinating and reviewing submissions and dealing with presenters at the actual event. In Houston, Davis chaired the track “Factors in Time and Distance Solutions.” 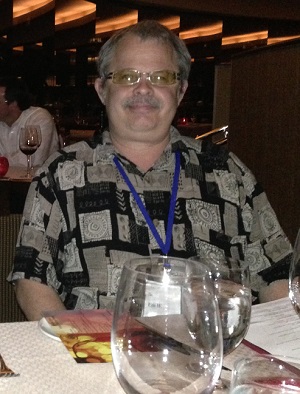 At left is Eric Davis sitting across the table from me at Spindletop, the Hyatt Regency’s rooftop restaurant, which turns out to be quite good despite the fact that it rotates. Calvin Trillin came up with the applicable maxim: “I never eat in a restaurant that’s over one hundred feet off the ground and won’t stand still.” I’ve always found that to be a good rule but the Hyatt’s restaurant is an exception because of its superb seafood. In the photo, my wine glass is absurdly foreshortened — it wasn’t really that big — but the wine selection was first-rate and included the spectacular Cloudy Bay Sauvignon Blanc. Forgive me for the digression, but for ten years I was a restaurant critic for a local newspaper and still have the habit.

At the first track session for “Factors in Time and Distance Solutions,” Terry Kammash (University of Michigan) ran through the basics of the rocket equation to show why chemical rockets were inadequate for deep space travel. Kammash is interested in a fusion hybrid reactor whose neutron flux induces fission, a system that could eventually enable interstellar missions. It is based on Gas Dynamic Mirror (GDM) methods that surround a plasma-bearing vacuum chamber with a long, slender, current-bearing coil of wire. The plasma is trapped within magnetic fields that control the instability of the plasma. Here it’s worth mentioning that a Gas Dynamic Mirror propulsion experiment in 1998 produced plasma during a NASA test of the plasma injector system, injecting a gas into the GDM and heating it with microwaves in a method called Electronic Cyclotron Resonance Heating.

Pauli Erik Laine (University of Jyväskylä, Finland) described himself as a computer scientist rather than a rocket scientist, but the two designs he presented were based, like Kammash’s, on hybrid propulsion systems. In Laine’s case, the method is nuclear thermal propulsion, as developed through the NERVA program coupled with nuclear-electric propulsion and a gravitational slingshot maneuver for initial acceleration. Laine also discussed fission fragment rocket technologies in which heavy and light fission fragments, rather than being dissipated as heat through conventional reactor methods, are used directly for thrust. A hybrid fission fragment mission added a solar sail and used multiple staging to achieve five percent of lightspeed.

It’s always great to run into old friends at conferences like these, and I was pleased to see Charles Quarra, who had presented his ideas on what he calls a ‘light bridge to the stars’ in Dallas at Icarus Interstellar’s Starship Congress. Charles is an independent researcher and software developer now based in Panama who has written up the idea of the ‘laser starway’ on Centauri Dreams (see A Light Bridge to Nearby Stars). The work extends earlier concepts by Robert Forward and Geoffrey Landis, solving issues of laser pointing accuracy by using multiple lenses spaced between two stars to deliver the needed high energy density.

My son Miles and I took Charles down the street that evening for a drink at Guadalajara, an excellent Mexican restaurant whose margaritas were impeccable (the grilled salmon tacos were likewise outstanding). While we enjoyed the atmosphere we talked about the starway, a concept that would require continual maintenance, but once built, would become like a highway system for future missions. We go from single missions toward building a long-term infrastructure, the same issue, Charles noted, that Roman engineers faced as they spanned bridges to connect the various Roman territories and provinces. Like the starway, the bridge building was a lengthy task but ultimately it reduced travel time and kept the business of the empire in motion.

The Uses of Curiosity

But back to the “Factors in Time and Distance Solutions” track, where NASA’s Harold “Sonny” White reported on his research on hyperfast travel through the expansion and contraction of spacetime. White ran through the model provided in the 1990s by Miguel Alcubierre and explained the notion that a ring of negative vacuum energy formed around a payload would create a warp bubble within which there are no tidal forces and clock rates remain the same during the journey as they do at mission control. One of the deal-breakers for such thinking has always been the colossal energies needed to optimize the topology of the warp bubble, which until 2011 had remained as high as the equivalent in exotic matter of the mass of Jupiter. 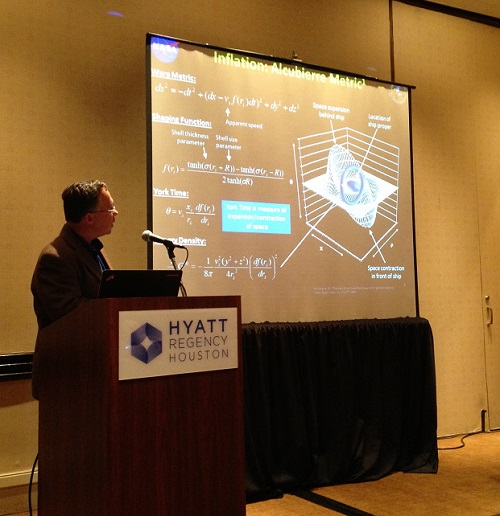 Basic to the idea is that while objects cannot move faster than the speed of light through spacetime, there is no limitation on the expansion of spacetime itself. The inflation of spacetime is indeed a feature of models of the early universe. A payload enclosed within such a bubble would thus ride a wave induced by expanding spacetime behind the bubble and contracting it in front. White’s work manipulated the shape of the bubble around the spacecraft, changing its shape and thickness, and noting that as these factors were altered, flat spacetime in the center was sacrificed but the amount of strain was reduced. The amount of energy needed is thus decreased by orders of magnitude, down to levels equivalent to the mass of one of the Voyager spacecraft by oscillating the intensity of the bubble and reducing the ‘stiffness’ of spacetime.

White’s hope is that the interferometer he has built at the Eagleworks Optical Laboratory will eventually be able to produce evidence of a tiny instance of this effect. The goal is to detect and measure the effect of this minute warp bubble on the optical path through the interferometer by measuring associated interference fringe shifts. A sister laboratory at South Dakota State University is likewise designed to make such interferometry measurements although it uses different techniques to measure the effect. “We now have separate labs working on this,” White added. “And we do have some results that indicate a potential change in the beam path length. But I want to stress that this is far from conclusive. We simply can’t say anything definitive yet. The plan going forward is to continue to investigate our software approaches, working with larger data samples to reduce vibrational noise.”

Showing photos of the current laboratory setups, White described the interferometer’s operation and then went into the concept of quantum vacuum plasma thrusters, a form of electrical propulsion that in theory could push off against the quantum vacuum. He used the analogy of a submarine propeller pushing off against water. The submarine doesn’t carry a tank of seawater; instead, it is actually immersed in its propellant. The Q-thruster attempts to push off against the virtual particles continually coming into and out of existence in the quantum vacuum.

I’ve been asked repeatedly to write about White’s work but my thought is that other than discussing his presentations at conferences like this one, the best approach would be to have him tell you about his work himself. Sonny is the kindest of men, and he readily agreed to write an article about what he is doing. I’ve asked Eric Davis to do the same thing: Both are involved in matters that go well beyond my expertise and are far better able to explain their work than I can.

White’s work in particular has become highly visible and remains controversial. In Dallas at Starship Congress, we went over to the hotel pool where cheeseburgers were on sale and enjoyed a leisurely meal and beer outside. I can still remember Sonny cringing when I told him about an email I had received saying “Now that Dr. White has solved the warp drive problem…”

“We have so far to go to find out whether this will pan out,” he told me then. “My work on all this came out of curiosity. Sometimes it’s good to pursue things just because you’re curious. It’s worth doing to see if we can learn something and we’ll see where these experiments lead.”

I’ll wrap up coverage of the 100 Year Starship Symposium tomorrow with a look at an excellent science panel moderated by Jill Tarter and a lively talk on the uses of science fiction in raising and probing scientific questions that was presented by Marc Millis. I ran out of time today before I got to Joe Ritter’s track on “Destinations,” so I’ll also be sure to get into that tomorrow. We do, after all, need to know where we’re headed.