Joseph Green worked for 37 years in the American space program, retiring from NASA as Deputy Chief of the Education Office at Kennedy Space Center. His specialty was preparing NASA fact sheets, brochures and other semi-technical publications for the general public, explaining complex scientific and engineering concepts in layman’s language. Joe is the author of over 20 science papers for NASA and contractor executives, but I ran across him decades ago through his novel The Loafers of Refuge (Ballantine, 1965), a paperback that sits on my shelf not three feet from where I’m writing. Joe’s five science fiction novels, which include Star Probe (1976) and Conscience Interplanetary (1972), are complemented by about 80 shorter works, and he remains active writing for online magazines, with recent stories in the February and May 2013 issues of Perihelion Science Fiction. As Joe explains, 31 years at Kennedy Space Center puts a wonderful spin on recent events. Sometimes the future happens faster than we think. 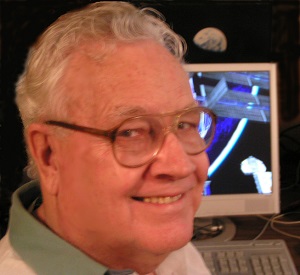 Not long ago the morning paper carried a front page though below-the-fold story to the effect that space scientists, working from accumulated and analyzed data, have finally agreed that the Voyager I spacecraft entered interstellar space on August 25, 2012. Up until now the exact time has been a matter of dispute. The spacecraft is still operating, and expected to have enough power to keep sending back reports, from at least one sensor, until about 2025.

In 1977 I manned a console as a member of the Atlas/Centaur launch team. I also prepared the A/C technical documents, including the “NASA Fact Sheet(s)” distributed in advance of each launch. These were a compilation and distillation of the most important basic data on both spacecraft and launch vehicle. They were carefully written for the layman, explaining the mission in terms understandable to most high school juniors. I inaugurated the series, and they became very popular with non-technical Kennedy Space Center personnel, the general public, and in particular the news media (the last for obvious reasons — a lot of their work done for them).

Although I wasn’t a member of their teams, the Delta and Titan/Centaur managers tasked me with preparing Fact Sheets for their missions as well. The much larger and more powerful Titan/Centaur had been chosen as the launch vehicle for the Voyagers because of the weight of the (at the time) highly sophisticated robot explorer, and the unusually high velocity needed to reach Jupiter in 18 months.

After a close-up exploration of Jupiter and several of its moons, Voyager I went on to Saturn for another flyby, then headed into interstellar space. The last was basically frosting on the cake, as was the photo Voyager I took on February 14, 1990, looking back at the Solar System (showing Earth as a “pale blue dot”). The two most important mission objectives had been successfully accomplished. Few expected this hardy explorer to still be functioning and reporting back when its escape velocity of 17 kilometers per second (in relation to the Sun) took it into interstellar space. But it’s there, and with another decade (hopefully) of life expectancy.

Image: The Voyager missions with their direction of flight indicated. Credit: NASA/JPL.

The journeys of the Voyagers have been reported here on Centauri Dreams and widely discussed in other media. For me, they trigger reflection and thoughts on perspectives. Mine is that of a teenager reading science fiction in the 1940s, never dreaming that mankind would land on the Moon in my lifetime (2050, perhaps?). And sending a robot into interstellar space was in the far, far future, something my great-grandchildren might try. And yet I not only lived to see both, I actually played a small role in these two great scientific adventures. Those of you growing up at a time when you rather expected to see men walking on the Moon, or robots reporting back from interstellar space, may have an entirely different perspective.

Sometimes the glamor and excitement of manned space flight tends to overshadow the accomplishment of the Voyagers, Pioneers, and other doughty robotic explorers. But in many ways unmanned spacecraft have contributed more to our knowledge of the solar system, and galaxy/universe than the manned programs. We’ve now had robot explorers do close-up, highly instrumented flybys of all eight planets, and one is on its way to the disenfranchised Pluto/Charon system. These accomplishments, it seems from this perspective, are worthy of more respect than they have received from the world at large.