Aerospace engineer Gerald W. Driggers embraced the dreams of Dr. Werner von Braun and his team at an early age and was privileged to meet and work with many of them. He was a prominent figure in studies of space colonization and industrialization with Dr. Gerard K. O’Neill in the 1970’s and also served as an officer in the US Air Force working on satellite launch vehicles. He has published over 35 technical papers and general interest articles and contributed to three books on technical subjects, but is now turning his attention to science fiction, authoring a series of books called The Earth-Mars Chronicles. Gerald and his wife became the first U.S. sponsors of the Mars One Project, whose objective is to place a team on Mars in 2023. A portion of the proceeds from sales of “The Earth-Mars Chronicles” goes to the Mars One Project. For 17 years, Gerald has lived on a series of boats because, in his words, “It was the closest thing I could get to a space ship.” He currently resides in Florida with his wife and Wilson the cat. 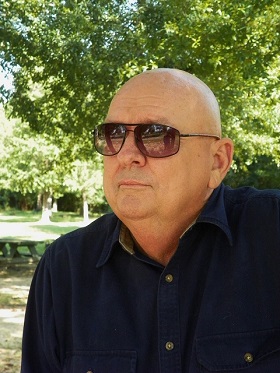 I was in the middle of working on The Earth-Mars Chronicles Vol. 2 Home for Humanity when the opportunity arose to submit an abstract for the second Tennessee Valley Interstellar Workshop. The review committee selected one of the two abstracts I submitted with the title “Martians Will Make the Best Interstellar Voyagers.” My research into human factors related to extended isolation away from Earth (i.e. settling Mars) led me to an appreciation of how many issues were time and distance independent. Following that chain of logic provided me with the title of my presentation. However, the concept of a connection between going interstellar and settling Mars grew as I delved further into the subject matter.

Although I applaud heartily the current enthusiasm exhibited at starship and interstellar conferences and symposia, I am convinced that the roadmap to the stars must include suitable infrastructure and capability within our own solar system. This sentiment was expressed by Paul Gilster in Centauri Dreams with this statement commenting on the Deep Space Industries announcement on 22 Jan 2013 of a new asteroid mining initiative. “Could it be the beginning of the system-wide infrastructure we’ll have to build before we think of going interstellar?” Equally as insightful was the comment “I think before we ever really undertake sending something to another star, we will probably have to be masters of our own solar system,” made by Les Johnson in an interview with Space.com. The infrastructure mentioned by Paul and the mastery referenced by Les both have many dimensions including the human as well as the technical. 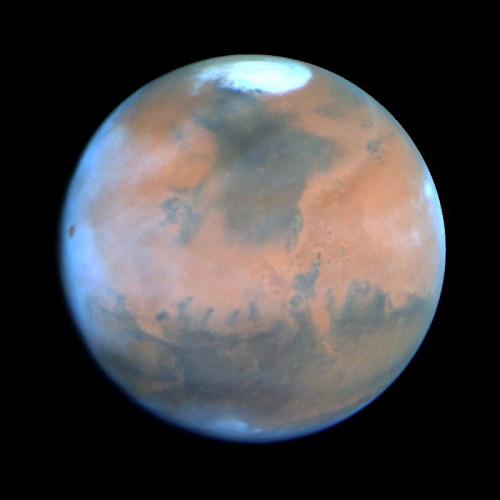 A question I posed to myself was: What are the elements of the human dimension? There has been considerable research in this area over the past fifty years and luckily much of it was summed up in 2012 by Dr. Nicholas Kanas and Dr. Rhawn Joseph in a table of long duration space mission stressors (in Colonizing Mars: The Human Mission to the Red Planet, edited by Levine and Schild, Cosmology Science Publishers, 2012). In the following list items one through nine were summarized by Dr. Kanas and number ten is from the work of Dr. Joseph.

My objective was to evaluate how the human population of Mars would compare to other pockets of humanity in a possible era of starship development so I picked 100 years as a target for extrapolation. Making an accurate specific prediction of where we will be in the Solar System 100 years from now is totally impossible so I examined a number of scenarios stretching from interplanetary stagnation (no fun and of no use to us) to highly optimistic where humans are operating throughout the inner Solar System. I subsequently picked the optimistic scenario with Mars settlements, exploitation of NEO and main belt asteroids, and lunar mining and settlement being mature and growing in 2113. This scenario was used to define where there would be permanent concentrations of people suitable to provide crew for an interstellar voyage.

The evaluation and comparison criteria are too detailed to present here but consisted of considerations of levels of automation and remote control for mining operations, maintenance and repair; likelihood of families as part of a large staffing; and likelihood of permanent long-term (lifetime) residency. My conclusion was that the three most viable sources for interstellar voyagers would be the Earth (by definition), the Moon and Mars. The next step was a subjective assigning of a measure of confidence related to an individual’s coping with the stressors based on their background and experience. 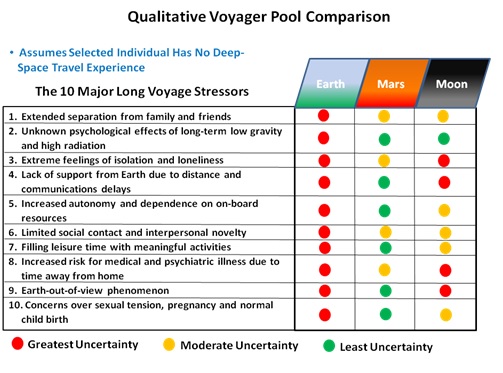 As I stated this is highly subjective, but I believe an examination of the environment and attributes one would expect from a citizen of Mars may assist in understanding my red, orange and green assignments. The very existence of expanding multi-generational Mars settlements implies that the individuals and culture will have the following characteristics although the number of generations required to achieve steady state in all areas is unknown.

Mars residents will by definition score well in all 12 of these categories. Lunar residents are less likely to score as well in categories d, e, j, and k. It is not possible to score the last factor (l) because it is currently unknown whether normal pregnancy, childbirth, and development are possible in the Lunar 1/6 Earth gravity environment. The population on the Moon could conceivably be composed of adults and children above a certain age who were born on Earth, whereas a growing population on Mars will not happen unless normal pregnancy, childbirth and development are possible. Human beings simply do not flock to a place where they cannot have children and raise families. Subsequently, I ranked Mars higher than the Moon in this category.

This then makes my case that a significant multi-generational population on Mars will provide a hearty pool for selection of low-risk interstellar voyager candidates. Unfortunately, my assessment of milestones on the way to having that population did not fit the 2113 target date I was initially using as a goal. There are far too many details to go into here, but the evolution time for in-space infrastructure and transportation does not appear to support a flourishing population on Mars before about 2140. There are, however, a number of wildcards in the space deck that could change this. Mars One, Inspiration Mars, Space X, Planetary Resources, Deep Space Industries and a host of other private and commercial entities are striving to significantly accelerate my timeline. I do wish them all well.

Here are my parting thoughts from my presentation. Although not absolutely essential technically, it seems intuitively obvious that humanity will expand beyond Cis-Lunar space before embarking on an interstellar voyage. But do we have to expand well beyond the asteroid belt before entertaining serious interstellar ambitions? I conclude that the answer is no, even if Jupiter has to be exploited to obtain the necessary ³He. Also, advocating for the right near-term infrastructure is the equivalent of advocating for interstellar flight, so the sooner we settle Mars, the sooner we will have our “…system-wide infrastructure…” and be “…masters of our own solar system.”