Before getting into the distant regions near Pluto/Charon, let’s pause for a moment with a reflection on speed. New Horizons left Earth orbit traveling faster than any other vehicle launched into interplanetary space, although it has since slowed. Now the Juno mission is getting press for its velocity, perhaps impelled by this quote from Bill Knuth (University of Iowa), who is lead investigator for one of the probe’s nine scientific instruments. Of Juno’s recent close approach to Earth, Knuth says:

“Juno will be really smoking as it passes Earth at a speed of about 25 miles per second relative to the Sun. But it will need every bit of this speed to get to Jupiter for its July 4, 2016, capture into polar orbit about Jupiter. The first half of its journey has been simply to set up this gravity assist with Earth.”

Amidst the Plutonian Moons

But back to Pluto/Charon, as I catch up with news from the AAS Division for Planetary Sciences meeting earlier this month in Denver. One of the curiosities about Pluto as we’ve discovered new moons there is their arrangement. Charon is the nearest and by far the largest moon, but what we see in the others is a steady succession that varies with Charon’s own orbital period. Thus Styx, Nix, Kereberos and Hydra present us with orbital periods that are 3, 4, 5 and 6 times longer than Charon’s own. That flies in the face of current models of formation of such moons, a situation that, according to Southwest Research Institute scientist Hal Levison, “suggests that we have been missing some important mechanism to transport material around in this system.” 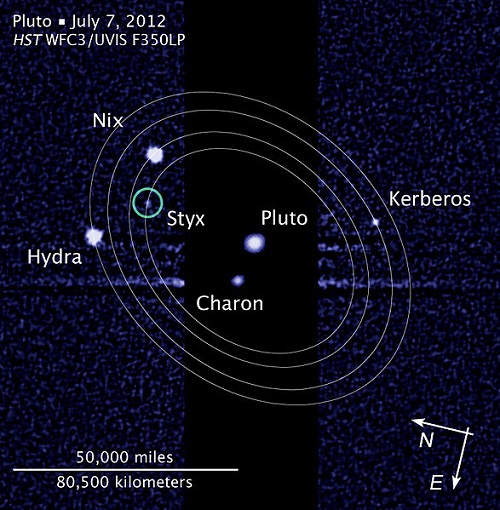 Image: A Hubble image of Pluto and its moons that has been modified by replacing “P4” and “P5” with the newer designations “Kerberos” and “Styx” respectively. Credit: NASA/Wikimedia Commons.

The SwRI study, described in this news release, modeled Charon itself by assuming a large impact in the early system, with additional moons built out of debris from this and other presumed collisions. Charon is fully one-tenth the mass of Pluto (by comparison, the Moon is 1/81 the mass of Earth), and its effect on early moon formation would be profound. Small moons that approached it would be flung outward while other small moons would collide, a series of early catastrophes that would lead to moon-building materials being pushed outward.

“The implications for this result are that the current small satellites are the last generation of many previous generations of satellites,” said Dr. Kevin Walsh, another investigator and a research scientist in SwRI’s Planetary Science Directorate at Boulder, Colo. “They were probably first formed around 4 billion years ago, and after an eventful million years of breaking and rebuilding, have survived in their current configuration ever since.”

All of which leads me to the New Horizons Message Initiative that was first announced at the 100 Year Starship Symposium in Houston not long ago. If you haven’t signed the NHMI petition yet, please visit the site and do so. The plan is to reconfigure a small portion of New Horizons’ computer memory, once its mission has been accomplished at Pluto/Charon and any Kuiper Belt objects beyond, so we can upload a message from humanity that will be crowd-sourced from all over the world. This is a private initiative and we need petition signatures to persuade NASA to consider this follow-up to the original Voyager ‘golden records.’ The NHMI is being developed through the capable work of Jon Lomberg and a team of volunteers. Lomberg’s work with Frank Drake in designing the cover for the Voyager records helped us gain perspective on our place in the cosmos as we reflected on what sights and sounds best represent our species.