The recent question raised here about conditions on a white dwarf planet provides a segue to the white dwarf GD 61 and the interesting results reported by astronomers at the Universities of Cambridge and Warwick. Relying on data from Hubble as well as Keck I and Keck II and NASA’s FUSE telescope, the researchers have analyzed what they believe to be evidence for an asteroid or minor planet that once contained large amounts of water around the star. The water-rich object would have been knocked out of its orbit and subsequently shredded by by the star’s gravitational force. 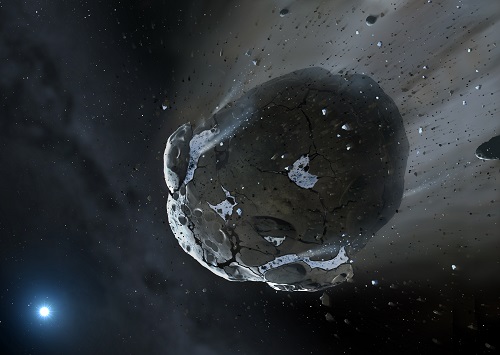 Image: Artist impression of a rocky and water-rich asteroid being torn apart by the strong gravity of the white dwarf star GD 61. Similar objects in the Solar System likely delivered the bulk of water on Earth and represent the building blocks of the terrestrial planets. Credit & Copyright: Mark A. Garlick, Space-Art.co.uk/University of Warwick/University of Cambridge.

GD 61 is some 150 light years from us, but spectrographic observations with the Keck instruments have made it possible to detect the basic ingredients of the disrupted material surrounding the white dwarf. Magnesium, silicon and iron show up in the star’s contaminated atmosphere, but so does significantly more oxygen than would flag the presence of rocky materials alone. Hubble’s Cosmic Origins Spectrograph is the key instrument in this finding. Boris Boris Gänsicke (University of Warwick) explains the significance of the oxygen levels:

“This oxygen excess can be carried by either water or carbon, and in this star there is virtually no carbon – indicating there must have been substantial water… This also rules out comets, which are rich in both water and carbon compounds, so we knew we were looking at a rocky asteroid with substantial water content – perhaps in the form of subsurface ice – like the asteroids we know in our Solar System such as Ceres.”

Substantial is the word, for the researchers believe the asteroid would have contained about 26 percent water mass, which is indeed similar to Ceres. The Earth, by comparison, has only 0.023 percent of its mass as surface water, an indication that our oceans were delivered by water-rich asteroids or comets long after the planet formed. Jay Farihi (Cambridge Institute of Astronomy) is quoted in this Keck Observatory news release:

“The finding of water in a large asteroid means the building blocks of habitable planets existed – and maybe still exist – in the GD 61 system, and likely also around a substantial number of similar parent stars. These water-rich building blocks, and the terrestrial planets they build, may in fact be common – a system cannot create things as big as asteroids and avoid building planets, and GD 61 had the ingredients to deliver lots of water to their surfaces. Our results demonstrate that there was definitely potential for habitable planets in this exoplanetary system.”

Before becoming a white dwarf, GD 61 was about three times more massive than the Sun, and the research team believes the detected water came from a minor planet at least 90 kilometers in diameter but probably larger, one that would have been orbiting the star before it became a white dwarf some 200 million years ago. The mass estimate is conservative because the observations can only detect what has been swallowed by the star in recent history.

The scientists also speculate that it would have taken the presence of one or more giant planets to perturb an asteroid orbit enough to send it inwards toward the star, a mechanism for continual pollution of the white dwarf’s atmosphere. We may be looking at something like what our own Solar System will look like in another five or six billion years, a scene future astronomers could likewise use to reconstruct the presence of terrestrial and gas giant planets. According to this University of Warwick news release, twelve destroyed exoplanets orbiting white dwarfs have been studied, but the GD 61 work marks the first time that evidence for water has been found.