A recent article in Popular Mechanics about Young K. Bae’s work on laser propulsion is generating some buzz, enough that I went back to look at the 2008 report Bae did for the NASA Institute for Advanced Concepts. Actually there are two reports, a Phase I and a later Phase II (with additional funding) on the topic of “A Contamination-Free Ultrahigh Precision Formation Flight Method Based on Intracavity Photon Thrusters and Tethers.” Bae was interested in spacecraft formation flight down to precisions of mere nanometers. 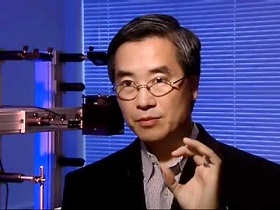 The idea relates to missions that would use multiple spacecraft to study astronomical phenomena. In fact, setting up a proper configuration would allow the study of biosignatures in the atmospheres of terrestrial exoplanets, using the technique of interferometry. Here the image produced has a resolution equal to that of a telescope as large as the maximum antenna separation, but the spacecraft involved have to maintain their alignment. Both ESA (with the Darwin mission) and JPL (with one configuration of Terrestrial Planet Finder) have studied interferometry in this context, and Bae’s work would assist such formation flying.

Making it possible, in Bae’s view, was the use of laser methods in combination with tethers, but the work has grown beyond that original concept into what is being described as a ‘photonic laser thrust system,’ in which a laser is generated in a cavity between two mirrors. The resultant beam is fired from a space-based launch platform stabilized by conventional thrusters, and now we’re in territory made familiar by Robert Forward, who envisioned enormous laser installations firing beams to departing ‘lightcraft,’ sails pushed by laser light all the way to nearby stars.

The photonic laser thruster (PLT) is described on Bae’s website as:

…an innovative photon thruster that amplifies photon thrust by orders of magnitude by exploiting an active resonant optical cavity formed between two mirrors on paired spacecraft. PLT is predicted to be able to provide the thrust to power ratio (a measure of how efficient a thruster is in terms of converting power to thrust) approaching that of conventional thrusters, such as laser ablation thrusters and electrical thrusters. Yet, PLT has the highest specific impulse (a measure of how fast the fuel can propel spacecraft) orders of magnitude larger than that of other conventional thrusters. 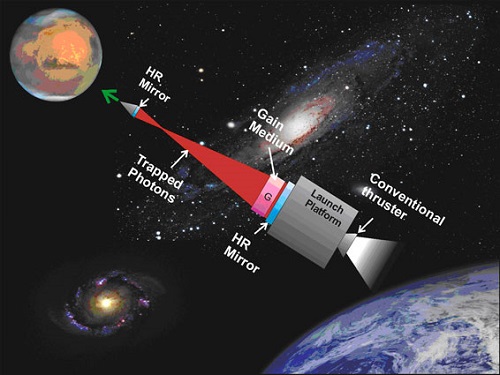 We’re very early in this game, although a small amount of research on beamed propulsion to sails has been performed in the laboratory by Jim and Gregory Benford. A space-based experiment using what was to have been the Planetary Society’s COSMOS sail never occurred after the sail’s launch failure in 2005, but even then the plan had been to use the Goldstone dish of the Deep Space Network to bounce a microwave beam off the sail to measure the effects. Laser experiments are sure to follow as we gain expertise at operating sails in space.

Forward’s laser installations would use abundant solar power from orbits near that of Mercury, firing out a laser beam that would have to be kept narrow — collimated — by a vast lens built in the outer Solar System. The same problem occurs with Bae’s lasers, but at least in the early days, he’s talking about near-Earth and lunar missions, and eventual flights to Mars. The diffusion problem occurs as we start contemplating significantly longer missions. And note this, from the article: “One compensation is the idea of doing smaller platforms to create a ‘photonic railway,’ each acting as a sort of refueling station in between to get the craft where it needs to be.” Here Charles Quarra’s idea of using multiple lenses for beam refocusing comes to mind.

Popular Mechanics doesn’t mention it, but Quarra’s ‘starway’ concept grows out of work first performed by Geoffrey Landis back in the 1990s and posits an eventual ‘light bridge’ connecting nearby solar systems (see A Light Bridge to Nearby Stars for more). Bae is evidently studying beam collimation in terms of ‘Bessel beams’ as well, beams that do not diffract like a conventional laser. What both these ideas get us away from is the need Forward saw of building a lens somewhere beyond the orbit of Saturn that would focus the laser light tightly on the departing spacecraft. Such lenses would demand building space artifacts the size of Texas.

Photonic laser thrusters have now received a Phase II grant from the resurrected NIAC, with the focus on the near-term development of the technology for spacecraft maneuvering and formation flying. For the longer view, see Dr. Bae’s “Prospective of Photon Propulsion for Interstellar Flight,” in Physics Procedia Vol. 38 (2012), pp. 253-279 (abstract), which describes a ‘photonic railway’ that would, in Bae’s words, “…bring about a quantum leap in the human economic and social interests in space from explorations to terraforming, mining, colonization, and permanent habitation in exoplanets.” That’s an energizing goal, but let’s get formation flying using photonic thrusters demonstrated first to see how all this scales up.