How do we go about using photons to accelerate a spacecraft to a substantial percentage of the speed of light? Ten percent of c ought to do — it gets us to Alpha Centauri with a mission time of 43 years and would allow us to at least send flyby probes into that system, with the promise of larger decelerating probes as new technologies became available. After yesterday’s post on Young Bae’s photonic thrusters, I went back and read his 2012 paper “Prospective of Photon Propulsion for Interstellar Flight” (reference at the end). 10 percent of lightspeed is indeed the minimum he chooses. It works out to 30,000 kilometers per second.

Back in the 1950s, the German scientist Eugen Sänger talked about a ‘photon rocket’ as a way of reaching the stars, but his design called for annihilating electrons and positrons and using the gamma rays thus produced for thrust. The idea stumbled over the problem of controlling this kind of exhaust stream, for gamma rays penetrate anything we use to contain them. But the insight that photons themselves could be used to impart momentum to a sail was already in the air when Sänger was pursuing these notions, and it would not be long before beamed laser propulsion came to the fore as the subject of numerous papers on interstellar flight.

Beaming Energy to a Sail 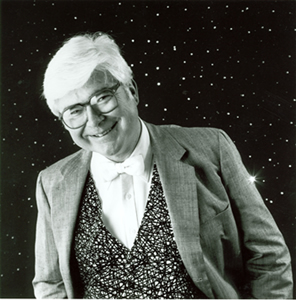 Robert Forward’s insights are repeated by Bae in his 2012 paper, which notes that separating the photon generators and the spacecraft pays numerous dividends. Propulsion systems that do not use rockets allow us to keep the heavy parts of the vehicle, especially the energy source, here in our own Solar System, while sending the payload out on its mission. As became clear yesterday, however, beamed laser propulsion also carries its share of problems, including the fact that we need to beam the laser photons over large distances. If you could forgive the need for Kardashev Type II engineering (able to use the entire energy output of its star), you could live with Forward’s huge Fresnel lenses, needed to keep the laser beam collimated, for laser beaming is based on reliably known physics. But we’re not exactly at Type II yet.

Even so, assume a laser beaming capability using abundant solar power from a station near the Sun. A beam is sent out into the Solar System, to be focused by a huge lens presumably built by some kind of nanotech means out of local materials. Forward wanted to coax an interstellar mission out of these ingredients, and various permutations followed, culminating in 1984 in a concept for an interstellar round trip with a human crew. The destination would be Epsilon Eridani, 10.5 light years from Earth, to be reached using a lightsail with a diameter of 1000 kilometers, with a Fresnel transmission lens of the same diameter somewhere past the orbit of Saturn.

The numbers are staggering in every direction. With a total vehicle mass of 80,000 tons, including 3000 tons for the crew and its equipment, the lightsail would reach an acceleration of 0.5 lightspeed in less than two years. It would be accelerated by a 75,000 TW laser system. More on this mind-bending energy problem and its consequences in just a moment.

But first, how do we decelerate when our spacecraft reaches the target system? Without another laser installation already in place, Forward came up with a ‘staged’ sail concept, in which the lightsail is divided into nested circular segments. Approaching Epsilon Eridani (about 0.4 light years out), the rendezvous part of the sail with attached payload including crew detaches from the main body of the sail, allowing laser light to be reflected from what is now a 1000 km ‘ring sail’ back to the rendezvous sail. It’s this reflected light that decelerates the smaller sail and brings it into the Epsilon Eridani system. The sail will be divided again after the crew has finished its explorations. Now laser light beamed from Earth strikes the remaining 320 kilometer ring sail and accelerates the small inner sail and its crew module for the return trip. A final burst of laser light decelerates the spacecraft back into our Solar System. 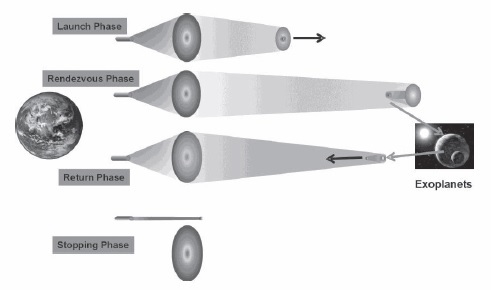 All of this is purely conceptual, but it has led to numerous papers on the methods and materials of beamed laser propulsion, even as we’ve widened the scope of the research to include microwave beaming. Not long ago, Joe Ritter (University of Hawaii at Maui) explained to the 100 Year Starship Symposium his own work on ultra-large, highly adaptive space mirrors, which could have interesting sail implications. Perhaps some of these studies, along with advances in laser capabilities, will make beamed sails commonplace in the Solar System, a period of experimentation that could eventually lead to the first true interstellar missions.

Young Bae believes that beamed laser propulsion when combined with his own photonic laser thruster (PLT) can reduce the power requirements of Forward-style beaming by a factor of ten to one hundred, while using a short wavelength laser can reduce it yet again. Thus an infrastructure that would have become available no sooner than 2500 (Bae bases this on world power production and its yearly growth, recently analyzed by Tau Zero’s Marc Millis) becomes an actuality by the year 2100. His proposal is to perform initial flights of exploration but to follow them up with the construction of the ‘photonic railway’ we looked at yesterday. From the paper:

…the Photonic Railway… aims [at] enabling routine interstellar commutes via Spacetrains. The Photonic Railway, if successful, would radically depart from the conventional spaceship concepts, in which a single spacecraft carries both an engine and a large quantity of fuel. Rather, the Photonic Railway would have permanent reusable space structures that propel Spacetrains, which would consist of mainly crew habitats, and navigation and crew safety equipment. The technological foundation of the Photonic Railway lies on a strategic combination of BLP by Forward and PLT, which is named here PLT-BLP. It is predicted that the development of PLT-BLP can be further expedited by incorporating the anticipated development in x-ray lasers and advanced material science and technologies, and the interstellar PLT-BLP is projected to be within reach in a century. 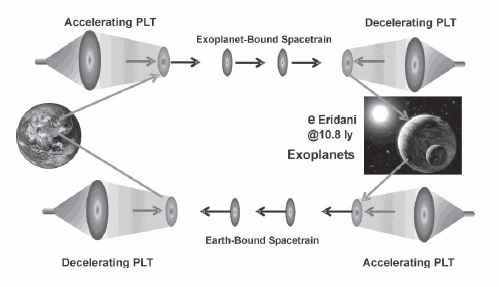 Image: Young Bae’s ‘photonic railway.’ It consists of four PLTs: two for acceleration and two for deceleration. The spacetrain will have small thrusters for attitude control and most of the onboard spacecraft resources will be dedicated to crew comfort and safety. Credit: Young Bae.

The photonic railway is, then, infrastructure, a permanent transportation system that would link nearby stars. Rather than a single laser beam from Earth, the beam is generated along the way. The structural parts for the lensing and laser systems must be delivered from Earth, but Bae envisions assembly and activation by self-directing robotic systems at the destination world. His paper illustrates a photonic railway using four photonic laser thrusters, two for acceleration and two for deceleration. The vehicle, or ‘spacetrain,’ would have thrusters for attitude control, but most of its resources would be dedicated to crew safety. The paper continues:

One important factor is that the Photonic Railway PLT needs to operate [a] much shorter distance than the distance between the earth and the exoplanet. Typically, depending on the Spacetrain acceleration condition (the optimal case would be 1 g acceleration for maximum crew comfort), the system operation distance would be at least a factor of 3.2 shorter than the flight distance. Because of this, the Photonic Railway optical system can be at least a factor of 10 smaller in size than the PLT-BLP optical system.

The paper goes on to sketch out this permanent transport structure, one based on the idea of photon propulsion that would act much as the transcontinental railway systems did at creating investment interest and economic opportunities. Building the photonic railway would involve a four part process beginning with the use of photonic thrusters in satellite maneuvering and leading to a lunar photonic railway, an interplanetary version, and ultimately the interstellar objective. Bae believes it is critical that each step provides return investment, and cites factors such as NEO mitigation, lunar mining and space solar power as early drivers toward this end.

Ultimately, Bae takes beamed laser concepts that have been extensively studied and combines them with photonic laser thruster technology, adding expected developments in x-ray laser and advanced material science to reduce the power and engineering requirements demanded by the missions Forward looked at. The goal is a photonic railway that is permanent and efficient. The citation is Bae, “Prospective of Photon Propulsion for Interstellar Flight,” Physics Procedia (2012), pp. 253-279. The classic Robert Forward paper is “Roundtrip Interstellar Travel Using Laser-Pushed Lightsails,” Journal of Spacecraft and Rockets 21 (1984), pp. 187–195.