New views from Cassini are giving us a much better look at Titan’s north pole and the seas and lakes that make the region so distinctive. This is particularly interesting because most of the moon’s lakes are concentrated at its northern latitudes, a fact that demands an explanation. The new near-infrared images show an area of bright terrain in this northern region that had not been observed before. This news release from the Jet Propulsion Laboratory suggests that the surface thus revealed is unique on Titan. If we can figure out what’s going on here, we may have an explanation for the concentration of lakes and seas in these latitudes. 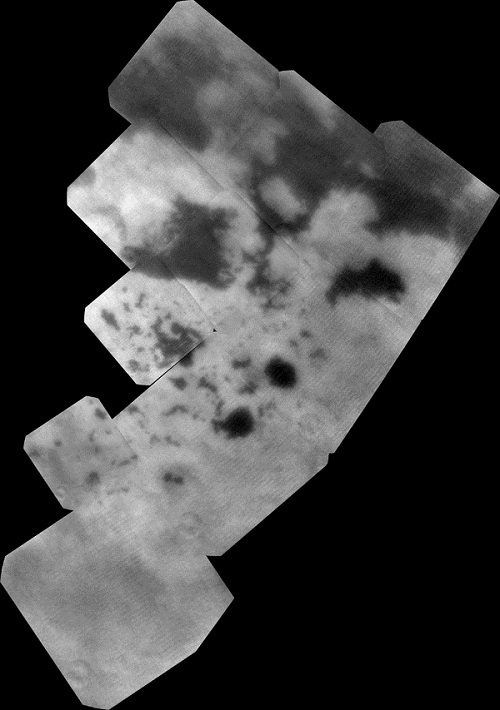 Image: The vast hydrocarbon seas and lakes (dark shapes) near the north pole of Saturn’s moon Titan sprawl out beneath the watchful eye of NASA’s Cassini spacecraft. Scientists are studying images like these for clues about how Titan’s hydrocarbon lakes formed. Titan is the only world other than Earth that is known to have stable bodies of liquid on its surface. Credit: NASA/JPL-Caltech/SSI/JHUAPL/Univ. of Arizona.

One explanation for the bright areas surrounding the lakes is so-called karst terrain, in which liquids have dissolved soluble bedrock — the Carlsbad Caverns in New Mexico are an example of such terrains on Earth. Another possibility: Land that has collapsed after a volcanic eruption, which could explain the distinctive round silhouettes and steep sides of these lakes. For an idea of scale, the largest of the seas, at upper right, is Kraken Mare, which is about the size of the Caspian Sea and Lake Superior put together. Kraken Mare is Titan’s largest sea; Ligeia Mare, the second largest sea, is to its left, a body about 500 kilometers across.

A number of factors make the new imagery possible. The viewing geometry of two recent Titan flybys has been an improvement over previous encounters. We’ve studied much of this terrain with radar, but the partial or oblique views we’ve recorded through Cassini’s visual and infrared mapping spectrometer and imaging science subsystem can now be supplemented with these more detailed images. Moreover, the haze that coated the north pole has broken up with the approach of summer in the area, with cloudless, sunny weather now becoming the norm.

“The view from Cassini’s visual and infrared mapping spectrometer gives us a holistic view of an area that we’d only seen in bits and pieces before and at a lower resolution,” said Jason Barnes, a participating scientist for the instrument at the University of Idaho, Moscow. “It turns out that Titan’s north pole is even more interesting than we thought, with a complex interplay of liquids in lakes and seas and deposits left from the evaporation of past lakes and seas.”

Indeed, we seem to be looking at something like the salt flats found on Earth, only here the evaporated material is likely to be organic compounds originally from particles in Titan’s haze that had once been dissolved in liquid methane. In the image below, these materials appear orange against the green background of water ice. Remember that images like these are colorized mosaics based on mapping infrared colors into the spectrum of visible colors, allowing us to see the variation in the lakes and their surrounding materials. 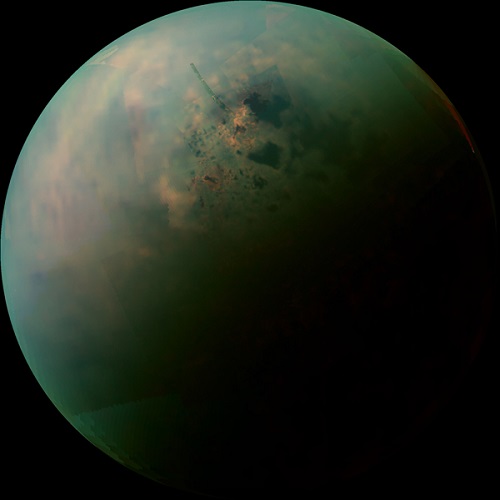 Image: This false-color mosaic, made from infrared data collected by NASA’s Cassini spacecraft, reveals the differences in the composition of surface materials around hydrocarbon lakes at Titan, Saturn’s largest moon. The orange areas are thought to be evaporite — the Titan equivalent of salt flats on Earth. The evaporated material is thought to be organic chemicals originally from Titan’s haze particles that once dissolved in liquid methane. They appear orange in this image against the greenish backdrop of Titan’s typical bedrock of water ice. Credit: NASA/JPL-Caltech/University of Arizona/University of Idaho.

“Titan’s northern lakes region is one of the most Earth-like and intriguing in the solar system,” said Linda Spilker, Cassini project scientist, based at NASA’s Jet Propulsion Laboratory, Pasadena, Calif. “We know lakes here change with the seasons, and Cassini’s long mission at Saturn gives us the opportunity to watch the seasons change at Titan, too. Now that the sun is shining in the north and we have these wonderful views, we can begin to compare the different data sets and tease out what Titan’s lakes are doing near the north pole.”

Indeed, and every new revelation from Cassini reminds us of what we might achieve with a new probe to Titan. The ideas are out there even if the funding is not, but the day may come when we see an airborne vehicle like AVIATR, designed to stay aloft for a one-year mission in Titan’s thick atmosphere, eventually reach the distant moon. And the work that has gone into concepts like Titan Mare Explorer and related studies on the Planetary Lake Lander remind us how useful it would be to be able to put an instrument platform into one of these intriguing ethane seas.

Next post: Astrosociology: The Human Dimension of Outer Space