Habitable zones are always controversial. Bring up the classic definition of a zone where liquid water can exist on the surface and you run into queries about places like Europa, far outside the HZ in those terms but perhaps capable of supporting life beneath the ice. For that matter, exotic forms of life cannot be ruled out in settings like Titan, though they would be nothing like what we’re familiar with on Earth. Nonetheless, refining our methods to look for life on planets with liquid water is a rational way to proceed and we’re developing the needed tools.

As we wait for those tools to be funded and built — projects like Terrestrial Planet Finder are on indefinite hold — we can continue to develop our theoretical models for living planets. On that score, Torrence Johnson (JPL) and colleagues have had interesting things to say lately. Johnson spoke at the American Astronomical Society Division of Planetary Sciences meeting in Denver earlier this month, addressing the question of planets rich in carbon. You would think that plentiful carbon, given its importance in living systems, would be a plus, but it turns out that having too much carbon is a serious problem even for planets in clement orbits like the Earth’s.

Here life has yet another ‘filter’ to get through. For the Earth is made up largely of silicates rather than carbon because the Sun is relatively carbon-poor. We assume that stars with much higher carbon content than the Sun will spawn planets so infused with carbon that they may have layers of diamond. What they apparently won’t have, according to Johnson’s models, is water. Much of the available oxygen in such a system would go into making carbon monoxide, with little oxygen left for making water ice. That means no icy asteroids delivering water to planetary surfaces.

Comets and asteroids are thought to have delivered the bulk of Earth’s water billions of years ago, moving into the inner system from beyond the ‘snow line’ where ice was plentiful. Carbon-rich planetary systems will simply lack this resource. Says Johnson: “There’s no snow beyond the snow line… The building blocks that went into making our oceans are the icy asteroids and comets. If we keep track of these building blocks, we find that planets around carbon-rich stars come up dry.” 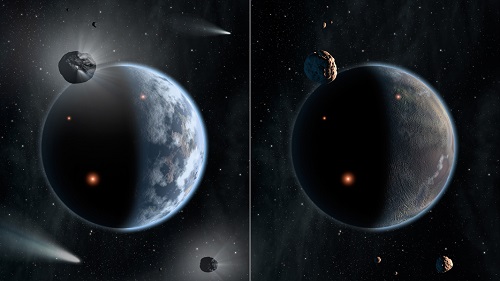 Image: This artist’s concept illustrates the fate of two different planets: the one on the left is similar to Earth, made up largely of silicate-based rocks with oceans coating its surface. The one on the right is rich in carbon — and dry. Chances are low that life as we know it, which requires liquid water, would thrive under such barren conditions. Credit: NASA/JPL.

This NASA news release has more, and the paper on this work fully develops the importance of the carbon-to-oxygen ratio, a result not only of elements from the Big Bang but also the hydrogen, helium, nitrogen, silicon, carbon and oxygen inherited from earlier generations of stars. The paper notes:

Planetary systems around stars with compositions that diﬀer from the Sun’s will have planetesimals – formed beyond the snow line – which have a wide range of silicate and metal, carbon and ice proportions. The fraction of silicate plus metal in extrasolar planetesimals should depend strongly on the C/O ratio in a given circumstellar nebula, which controls the abundance of water ice, clathrate hydrates, and stochiometric hydrates in the condensed solids. Other volatile ices are less strongly aﬀected by the host star compositions in our study, although C-bearing ices such as CO (ice and clathrate), CO2 and CH3OH will be more abundant with increasing C/O. The planetesimal population of our own outer solar system, as incompletely known as it is, represents only one trajectory through the planetesimal composition space deﬁned by the possible range of C/O and metallicities seen in other stars.

One day, then, we may find an Earth-mass planet in a star’s habitable zone that, because of its star’s composition, is highly unlikely to have anything alive on it. We’re not yet able to make the kind of spectroscopic observations that would flag life’s presence in a planetary atmosphere, but the paper adds that we can follow up these studies in the near-term by using instruments like the James Webb Space Telescope to study the planet-forming zones of young solar systems and the effect of primordial elements through heavy element enrichment in extrasolar giant planets.