When I was first learning about astronomy by reading every book I could find on the subject — I spent a lot of time at the library in my youth — I was fascinated to hear stories of a planet closer to the Sun than Mercury. The French scientist Urbain Le Verrier pondered the existence of such a world in the 19th Century, wondering if it wouldn’t explain peculiarities in Mercury’s orbit. When an amateur astronomer named Edmond Modeste Lescarbault claimed he had observed a transit of such a planet in 1859, Le Verrier’s investigation satisfied him that the detection was legitimate. He went on to announce the discovery of the planet he dubbed Vulcan in Paris in 1860.

Despite a string of other observing claims later in the century, the existence of Vulcan is now discounted, although the possibility of asteroids in tight solar orbits hasn’t been ruled out. As for Mercury, it fell to Einstein to demonstrate that apparent anomalies in its orbit could be explained by his theory of General Relativity. Vulcan was an intriguing story in those days of my early astronomy reading, as I asked myself how anything could survive closer to the Sun than Mercury, and conjured up hellish landscapes dominated by a sky-swallowing star above.

But if we don’t have Vulcan in our own Solar System, it’s clear that many other systems do have planets in extraordinarily close orbits. Yesterday I listened in on the news conference describing Kepler-78b, one of the new class of ‘ultrashort period’ planets that Kepler has put into our databases. To qualify as an ultrashort period planet, the world has to orbit with a period of less than twelve hours. Defying the imagination, Kepler-78b bests even that figure, orbiting a star somewhat smaller and less massive than the Sun in a mere 8.5 hours.

Image: Kepler-78b is a planet that shouldn’t exist. This scorching lava world, shown here in an artist’s conception, circles its star every eight and a half hours at a distance of less than 1.6 million kilometers. According to current theories of planet formation, it couldn’t have formed so close to its star, nor could it have moved there. Credit: David A. Aguilar (CfA).

Dimitar Sasselov (Harvard-Smithsonian Center for Astrophysics) told the audience that we had now found about a dozen objects orbiting various stars with periods of between three and ten hours, creating serious questions about how such planets form and survive. It’s even conceivable, said Sasselov, that Kepler-78b is the core of a former gas giant. Amidst the questions, what we do know is that its radius is about 1.2 times that of Earth and its mass 1.7 times Earth’s. With both size and mass measured, it’s possible to calculate the density, and that figure works out to 5 grams per cubic centimeter, which is a density much like our planet’s.

Kepler-78b, then, is most likely made of rock and iron. The work to demonstrate this points to the synergy between two kinds of observation and also relies on a dual investigation that produced confirming results. The planet was first observed by Kepler using the transit method, in which a planet moves in front of its star as seen from Earth and thus creates a dip in its lightcurve. Andrew Howard and team at the University of Hawaii at Manoa then used the Keck ten-meter instrument with the HIRES spectrograph to measure the star’s radial velocity, thus allowing the determination of the planet’s mass. The density reading follows from the size and mass.

Howard told the news conference that thirty hours of observations over eight nights went into the Keck work, which was a difficult measurement because the star is young and has many starspots. With an orbital period this short, the team was able to observe an entire orbit in a single night, however, and the starspot ‘noise’ could be filtered out. At the same time, Francesco Pepe (University of Geneva), using data from the HARPS-North spectrograph in the Canary Islands, was leading a companion study that verified the Keck team’s radial velocity observations. “The gold standard in science is having your findings reproduced by other researchers,” said Howard. “In this case, we did not have to wait for this to happen.” 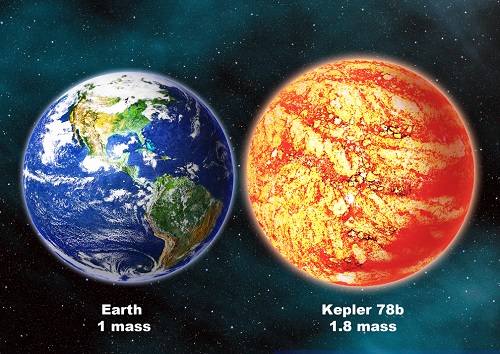 Image: This illustration compares our Earth with the newly confirmed lava planet Kepler-78b. Kepler-78b is about 20 percent larger than Earth, with a diameter of 9,200 miles, and weighs roughly 1.8 times as much as Earth. Credit: David A. Aguilar (CfA).

So we have an Earth-sized planet with Earth-like density in an orbit that remains a mystery. The star Kepler-78b orbits was larger than it is now when the planetary system was forming. “[The planet] couldn’t have formed in place because you can’t form a planet inside a star,” said Sasselov. “It couldn’t have formed further out and migrated inward, because it would have migrated all the way into the star. This planet is an enigma.” It is also a world that will eventually be torn apart by gravitational forces as it is drawn inexorably closer to the star, although according to this CfA news release, that won’t happen for another three billion years.

With temperatures as high as 3100 K on the surface, Kepler-78b is some 40 times closer to its star than Mercury is to the Sun, making my musings about Vulcan’s sky seem relatively tame. The papers are Howard et al., “A rocky composition for an Earth-sized exoplanet,” published online in Nature 30 October 2013 (abstract), and Pepe et al., “An Earth-sized planet with an Earth-like density,” published online in Nature 30 October 2013 (abstract).