Not long ago I pulled a wonderful 1950 film out of my collection for a long-overdue viewing. I remember 711 Ocean Drive from late night television airings, and when it popped up a few years back on a local cable channel, I made a recording. Edmund O’Brien and Joanne Dru are the key players in this gritty tale about an electronics expert who gets drawn into big-time crime, and the ending, which takes place at the Hoover Dam straddling the Nevada/Arizona border, is simply terrific, with O’Brien taking the fall after his shady dealings have been exposed. 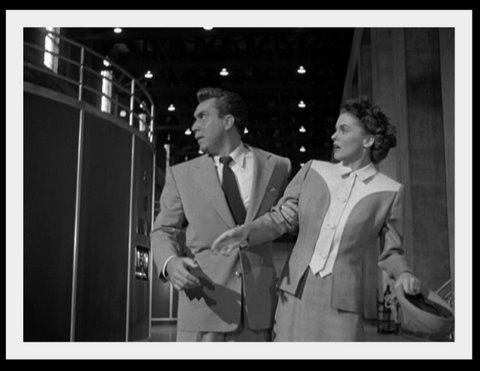 Image: On the run at the Hoover Dam in Joseph Newman’s 711 Ocean Drive.

Titanic forces, vast engineering, gunplay in the desert, all artfully directed by Joseph M. Newman — what more could you want? And now, thanks to Les Johnson, I connect Hoover Dam not only with a film noir classic but with long-term thinking and starflight. Johnson, speaking in his role as a science writer with deep connections to science fiction, told the recent Eve Online conference in Las Vegas that we as a species need to think big and think long if we are to realize our interstellar dreams. Hoover Dam was the example he used to remind us what it will take to reach the stars.

I’m always looking for examples of long-term thinking in our history, because as a species, we actually do this pretty well. The Egyptian pyramids are an obvious example, and so are many European cathedrals, some of which were generational in their construction. Some cathedrals went up relatively quickly, to be sure — the main structure at Chartres took a mere 25 years. Others, like Lincoln or Notre-Dame in Paris, were a century or more in the making. The foundation stone at Cologne was laid in 1248 and by the time of the Reformation, the structure remained unfinished, to be completed only in 1880, having become a national project.

Johnson’s invocation of the Hoover Dam is a reminder that not all the great projects were undertaken by civilizations long gone. As a culture, we often seem to think in short time-frames, but we do have the engineering skills to do much better. This Discovery News story quotes Johnson as saying “this dam was built in the 1930s, but the design life of the dam itself (not the power systems) is 2,000 years … that’s foresight! That’s engineering planning. That’s something we shouldn’t be afraid of today when planning for our (species’) future.”

Johnson is well known in these pages not only because of his work at NASA’s Marshall Space Flight Center, but also for his non-NASA activities, which include writing and editing as well as frequent public appearances. Going Interstellar (Baen, 2012), which he edited with science fiction author Jack McDevitt, is a collection of fiction and non-fiction that belongs on your shelf if you share my passion for interstellar flight. And Solar Sails: A Novel Approach to Interplanetary Travel (Copernicus, 2007), which he wrote with Greg Matloff and Giovanni Vulpetti, is a wise introduction to the possibilities and the problems of building sails in space.

Methods like nuclear pulse (think Orion) and antimatter have their advantages, but all require us to carry fuel onboard, and in the case of antimatter, creating enough of that fuel — not to mention storing it — is a major problem. But Johnson can point to sail successes that tell us we’re moving into the era of space applications. The IKAROS sail put Japan into space first with a functioning sail, and NASA’s NanoSail-D deployed a smaller sail in 2011, a year after IKAROS. We now look forward to NASA’s 1200 square meter Sunjammer mission in 2015, even as the Planetary Society continues to develop its Lightsail 1. They’re a long way from interstellar applications, but these missions show us that sails are swiftly climbing the ladder of technological readiness.

Thinking long and thinking big work together. Building the kind of sail that could be laser-boosted into interstellar speeds would mean creating a sail as big as Nevada itself, and Johnson pointed out that the energy output needed for it would equal the energy output of the entire human race today. The point is that the much smaller sail experiments we run today can build toward a future where such structures become possible because of the technologies we’ll create in coming centuries. And if we continue our work with that long-term perspective in mind, we can speak of starflight in ways that do not violate known physics even if they demand huge engineering.

The world of gaming seems a good place to stretch our concepts, and in the case of Eve Online, the setting is itself enormous. We’re talking about an MMORPG, which stands for Massively Multiplayer Online Role-Playing Game, and this one has a community of half a million, with a canvas that stretches across the galaxy and is stuffed with star systems ready to be explored.

Eve Online comes out of one of my favorite places, Iceland, and reminds me of travel experiences there over the past thirty years. Back in the 1970s, working on medieval linguistics in grad school, I went to Iceland under the urging of a wonderful professor named George Lane, who was himself fluent in Icelandic and had inspired my own interest in the language. Strolling through the numerous bookshops of Reykjavik, I found that modern editions of the great medieval works, from the sagas to the poetic Eddas, were readily available. The language itself retained much of the medieval structure in ways that most modern tongues do not. 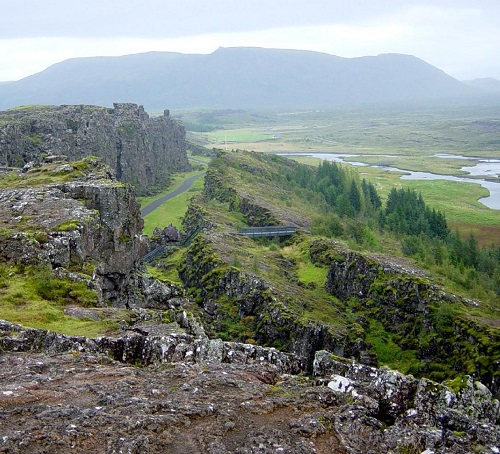 And maybe it was walking around at the site called Thingvellir (Þingvellir) on a foggy late afternoon in August that started teaching me about perspective. It was here that Iceland’s general assembly, the Alþing, first met in about 930 AD, on land that is situated at the boundaries of tectonic plates, a fissure zone that runs through Iceland itself. I walked about a mile from the small hotel and looked back across the valley as a bit of Sun emerged and a rainbow arced across the landscape. It was as if a Viking past reached all the way into the present day, and that day was itself the outgrowth of physical processes that came up out of the Earth’s deep core.

We carry the past with us wherever we walk but the sense of ‘deep time’ that overcame me that day is sometimes lost in the rush to complete day-to-day tasks. I think Les is right that we need to recover it as we look toward a human destiny among the stars. “Thingvellir is a place of echoes,” said a friend when I got back to Reykjavik. She was an English writer who had travelled often there and she knew what she was talking about. We must look back, far back, and then forward into a deep future, building our bridges as if our ancestors were crossing them.