The widely circulated Kepler results, announced yesterday, tell us that over twenty percent of Sun-like stars in the Milky Way have Earth-sized planets in the habitable zone, where liquid water could exist on the surface. Work out the math and it turns out that the nearest Sun-like star with a planet like ours in the habitable zone is probably on the order of twelve light years away, an energizing thought for those of us who ponder future technology and interstellar probes. Imagine: One in five Sun-like stars with a planet the size of Earth in the zone where liquid water can exist. 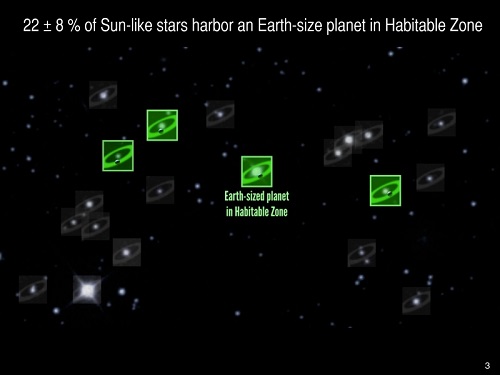 Image: Analysis of four years of precision measurements from Kepler shows that 22±8% of Sun-like stars have Earth-sized planets in the habitable zone. If these planets are as prevalent locally as they are in the Kepler field, then the distance to the nearest one is around 12 light-years.zone. Credit: Petigura/UC Berkeley, Howard/UH-Manoa, Marcy/UC Berkeley.

But how did we get here? Kepler, which was launched in 2009 to look for planets transiting their stars, examined over 150,000 stars for four years and turned up more than 3000 planet candidates. It’s been a fascinating ride, but finding ‘hot Jupiters’ and Neptune-class worlds and even intriguing super-Earths always reminded us that the primary goal was to learn what fraction of stars have Earth-sized planets at just the right temperatures for life. Ideally, retrieving data for G-class stars like the Sun would have helped us look for close twins of our planet.

Kepler’s malfunctions challenged but did not end that effort. The team involved in the present work includes Geoff Marcy and Erik Petigura (UC-Berkeley) and Andrew Howard (University of Hawaii, Manoa), who have been working with the 10-meter instruments at the Keck Observatory (Mauna Kea) to obtain data from the HIRES spectrograph, focusing on 42,000 stars in the Kepler field that are only slightly smaller and cooler than the Sun. 603 planets turned up, with 10 being between one and two Earths in diameter and orbiting in the habitable zone. Remember that only a small number of systems are oriented so that transits occur as viewed from Earth. The team’s algorithms yielded the estimate of 22 percent of all Sun-like stars with Earth-sized planets in their habitable zones, plus or minus eight percent depending on the habitable zone definition.

On the latter point, Erik Petigura defined the habitable zone for this study as that region where a planet receives between four times the light the Earth receives from the Sun and one-quarter of that amount. Kepler’s stuck reaction wheels have meant that extending the mission to analyze G-class stars like the Sun was not possible. Instead, the potentially habitable planets the team found in its survey all occur around K-class stars (Alpha Centauri B is the nearest example of a K-class star, though not in the Kepler field). The team’s analysis demonstrates that the results for K stars can be extrapolated to G-class stars, and thus we arrive at the 22 percent figure.

Telling us how common potentially habitable planets are around Sun-like stars is prime-time for Kepler, and now we have a reading that’s highly encouraging. As we look forward to missions to characterize exoplanet atmospheres and look for the signatures of life in their spectra, we can now assume that only a few dozen nearby stars will need to be observed before we detect an Earth-sized planet in the habitable zone, a fact that will play into the design of telescopes for such missions. Geoff Marcy, though, is quick to point out that just because a planet is Earth-like in size and in the habitable zone defined here, it isn’t necessarily life-bearing:

“Some may have thick atmospheres, making it so hot at the surface that DNA-like molecules would not survive. Others may have rocky surfaces that could harbor liquid water suitable for living organisms. We don’t know what range of planet types and their environments are suitable for life.”

The caution is understandable, and we are a long way from being able to make the kind of observations that help us pin down the presence of life on an exoplanet. We also need to remember that without information about the mass of these planets, we can’t say anything about their density and thus can’t be sure that they are in fact rocky worlds like our own. The discovery that Kepler-78b has the same density as the Earth, announced just last week, does tell us that at least some of these planets are likely to be rocky.

In any case, the idea that there are tens of billions of potentially habitable worlds in a galaxy of 200 billion stars is exhilarating, as Andrew Howard notes:

“It’s been nearly 20 years since the discovery of the first extrasolar planet around a normal star. Since then, we have learned that most stars have planets of some size orbiting them, and that Earth-size planets are relatively common in close-in orbits that are too hot for life. With this result, we’ve come home, in a sense, by showing that planets like our Earth are relatively common throughout the Milky Way Galaxy.”

We should also put these findings in a broader context. Red dwarf stars are not included in the study, but they represent 75 percent of the stars in the Milky Way. The question of whether life could exist around such a star, given the problems of tidal lock and stellar flare activity, is an open one, but we do know from previous work that 15 percent of these stars are expected to have Earth-sized planets in their own habitable zones (this is based on work by David Charbonneau and Courtney Dressing at the CfA; Ravi Kopparapu at Penn State obtained an even higher estimate). We don’t know yet whether life exists on any of the worlds around any of the stellar classes, but it does appear that the cosmos is stuffed with planets where the great natural experiments that lead to life can be run again and again.

The paper is Petigura et al., “Prevalence of Earth-size planets orbiting Sun-like stars,” Proceedings of the National Academy of Sciences, published online 4 November 2013 (abstract). Dennis Overbye’s report in the New York Times is well worth reading. I love this quote in Overbye’s article from Geoff Marcy: “This is the most important work I’ve ever been involved with. This is it. Are there inhabitable Earths out there? I’m feeling a little tingly.” Me too.